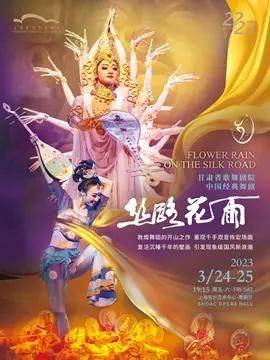 The opening work of Dunhuang dance reproduces the magnificent scene of thousand hand Guanyin, revives the murals that have been sleeping for thousands of years, and triggers a new wave of phenomenal national style

"Flower rain on the Silk Road" is a large-scale dance drama created by Gansu Song and Dance Theater with the background of the heyday of the Tang Dynasty in China, based on the world-famous murals of the Silk Road and Dunhuang, and absorbing the advantages of folk songs and dances around the world. The play premiered in 1979 and has visited more than 40 countries and regions. It has been praised by the media as "living Dunhuang murals, artistic enjoyment of beauty", "this dance should only exist in the sky, rarely seen in the world" and "a model of Chinese national dance drama". On the Silk Road, there is an endless stream of business trips from various countries. Suddenly, there was a strong wind, and the old painter Zhang and his daughter Ying Niang rescued inus, a Persian businessman who fainted in the desert. But on the way, Ying Niang was robbed by robbers. A few years later, in the Dunhuang market, shenbi Zhang found her daughter, but yingniang has become a Kabuki in the Baixi group. Inus redeemed his mother and reunited his father and daughter. In the Mogao Grottoes, Zhang shenbi painted his representative work - rebound PIPAJI Lotte according to his daughter's dancing posture. The city order in charge of trade tried to occupy yingniang. Yingniang and inus fled to Persia for refuge. Yingniang and the Persian people get along day and night and teach each other skills. Inus was ordered to lead the caravan to make Tang and Ying Niang return to the motherland. The city order instigated people to rob the caravan. The magic pen Zhang lit a beacon fire and called the police to save the caravan, but he gave his life... It is an ode to Chinese foreign friendship, carries forward the spirit of the Silk Road of "friendly trade, mutual benefit and integration", and also opens a road to spread Chinese culture. "Flower rain on the Silk Road" was a great success when it came out in 1979. It performed in Beijing for the 30th anniversary of the national day and won the "first prize for creation" and "first prize for performance" of the Ministry of culture. In 1982, he shot a color screen art film of the same name. In the same year, he went abroad and became one of the performing groups in Asia to enter the Milan Scala opera house, which also opened the prelude to the visit and exchange tour. Since then, the Silk Road flower rain has traveled in more than 40 countries and regions, boarded the Kennedy Art Center, Lincoln Art Center and other art halls, and was deeply loved by audiences and media at home and abroad. Over the past 40 years, on the basis of respecting the original and inheriting the classics, the play has kept pace with the times, constantly adapted to the aesthetic requirements of the performance market and the improvement of the audience, and has undergone three revisions. The newly arranged music integrates the characteristic national instruments into the orchestral performance; Clothing and dance beauty enhance the visual presentation effect; Classic dance sections are also constantly modified and improved to be more expressive.

In 1979, the choreographers and directors of Gansu song and dance theater entered Dunhuang seven times with a desire for art and admiration for Dunhuang culture. They looked for inspiration from the more than 2000 color sculptures and more than 40000 square meters of murals left over from the Mogao Grottoes, and carefully studied and copied the shaping dance movements, clothing accessories and even every look of the characters in the classic murals and sculptures. After a long time of research and exploration, the choreographers and directors finally found the unique S-shaped curve motion law of Dunhuang dance and began the process of moving Dunhuang murals onto the stage. At the same time, the creative team made a bold attempt to explore the history of the Silk Road and Dunhuang and integrate them into the dance drama. Using the rhythm of Chinese classical dance, the static Dunhuang murals were woven into elegant and flexible dance movements, among which the most famous are "rebound Pipa dance" and "thousand hand Guanyin". So far, the rain of flowers on the silk road was born. Since its birth, flower rain on the silk road has not only achieved a new dance - "Dunhuang dance", but also set off a "Dunhuang fever" in the country and a "Chinese wind" in the world. It has become the earliest and most lasting cultural export brand in China and has unparalleled brand value in China and the world dance world.

One of The Best of National Dance Drama

"Flower rain on the Silk Road" draws on the strengths of folk songs and dances from all over the world. In order to meet the scene of frequent exchanges and mutual benefit among ethnic groups on the Silk Road at that time, it integrates various dance art forms such as neon feather dance, Indian dance, black scarf dance, Persian horse Bell Dance, Persian wine dance, Turkish dance, disk dance, Xinjiang dance and so on, creating this large-scale dance drama with exquisite shape, diverse types of dance, novelty, uniqueness and beauty.