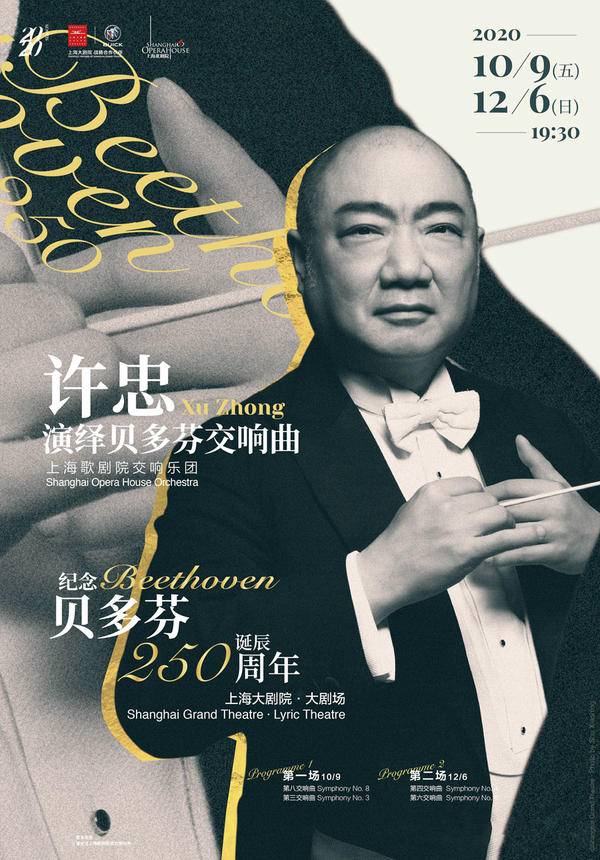 Venue:
Shanghai Grand Theatre Lyric Theatre
300 Renmin Da Dao, near Huangpi Bei Lu Huangpu Shanghai
Date:
12/6/2020
This ticket is only available as a paper ticket
After you have joined the waiting list, you will be notified if tickets become available via SMS.

The year 2020 marks the 250th anniversary of Ludwig van Beethoven’s birth. In line with worldwide celebrations for this occasion, the Shanghai Grand Theatre has planned a series of concerts in homage to the legendary composer, including the complete cycle of Beethoven’s piano concertos, first-ever in China in 2020, performed by pianist Zhang Haochen. Now the Shanghai Grand Theatre is hosting two concerts with the Shanghai Opera House, presenting the most representative symphonic works (No. 3 and 6) and relatively infrequent performed pieces (No. 4 and 8) by Beethoven. Thus the audience will enjoy a comprehensive understanding of his different symphonic characteristics.

Prior to Beethoven, no composer had ever elevated the form and substance of a symphony to such complexity and profundity as he would later have achieved. Since then, the symphony has dramatically increased in scale, with more refined themes and motives, and developments thoroughly expanded to the extreme. Owing to the deepness of intellection and complexity of techniques, his symphonies became the touchstone of symphonies by later composers, exerting pressure in particular on the romantic composers of the 19th century. To the latter, Beethoven’s symphonies stood as an insurmountable “Titan”.

In a span of 30 years that encompassed his entire creative output, Beethoven composed 9 symphonies, offering us a glimpse into his stylistic evolution. Symphony No. 3 “Eroica” and No. 6 “Pastoral” are the most frequently performed and widely adored. Both can be regarded as the greatest monolithic works in the symphonic repertoire.

Symphony No. 4 and No. 8 show his diversity by breaking his typical symphony style. Both are great masterpieces after centuries. Fu Lei praised Symphony No. 3 as “an unprecedented epic”. Romain Rolland regarded Symphony No. 4 as “a pure fragrant flower which treasures up the perfume of these days, the calmest in all his life”, Symphony No. 6 “a delicious idyll of a summer's day”, and Symphony No. 8 “(that) mingles tragedy with farce and a Herculean vigour with the games and caprices of a child”.

Maestro Xu Zhong, Director of the Shanghai Opera House and renowned pianist and conductor, has chosen Beethoven’s four symphonies (No. 3, 4, 6, and 8) of distinctive characters. The two concerts on 9 October and 6 December not only set a stage for the Shanghai Opera House Orchestra to showcase her ever-developing capability under the baton of Maestro Xu, but also encourage the Shanghai audience to commemorate the anniversary of Beethoven’s birth. In this truly remarkable year, listening to the powerful and inspirational symphonies by Beethoven refreshes and reinvigorates our minds.

The constant courage, persistence, and unyielding enthusiasm that lie in Beethoven’s scores enable us to embrace the unpredictable, to face up to the changes, and to savor the ride of conquering the unprecedented challenges. Xu Zhong received the rigorous formal piano music education in the class of Dominique Merlet at Conservatoire National Supérieur de Musique de Paris with the sponsorship of Chow Ching Lie Foundation. As a conductor, he learned with Prof. Xiaotong Huang and Maestro Piero Rattalino. Xu Zhong showed his exceptional genius in piano in his early years, and was reviewed as a top artistic pianist bursting on to the world stage. He won numerous prestigious international competitions including Maria Canals, Hamamatsu, Santander Paloma O'Shea, Tokyo and Tchaikovsky.

These awards have established Xu Zhong’s status as a pianist in the international music world. As a soloist, he was frequently invited to perform in most of the prestigious music festivals in Vienna, Luxembourg, Tokyo, Seoul, Beijing, Nice, Naantali and Hamamatsu. In the capacity of jury, Xu Zhong was regularly invited to the most renowned international piano competitions, including Busoni, Clara Haskil, AXA Dublin, Leeds, Marguerite Long-Jacques Thibaud, Sviatoslav Richter, Hamamatsu and Seoul. 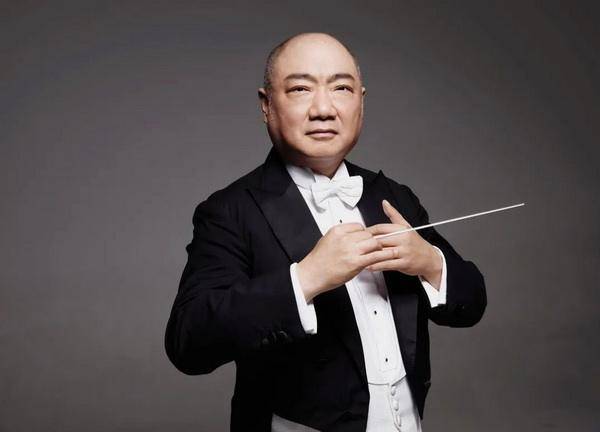 On February11 2020, Xu Zhong initiated a global music relay project, allying first class orchestras and opera houses from all over the world to encourage Chinese people in fighting against Coronavirus by using the power of music. On April 22 2020, as a continuation of the global music relay project, joining the hands with the Shanghai Radio, Xu Zhong launched a special 12-hour broadcast program named MUSIC ONE WORLD.

*All information on programme, artists and duration is subject to change *

Follow our WeChat for event news, deals, gossip and more!
After you have joined the waiting list, you will be notified if tickets become available via SMS.
Book Now

Venue:
Shanghai Grand Theatre Lyric Theatre
300 Renmin Da Dao, near Huangpi Bei Lu Huangpu Shanghai
Date:
12/6/2020
This ticket is only available as a paper ticket
After you have joined the waiting list, you will be notified if tickets become available via SMS.