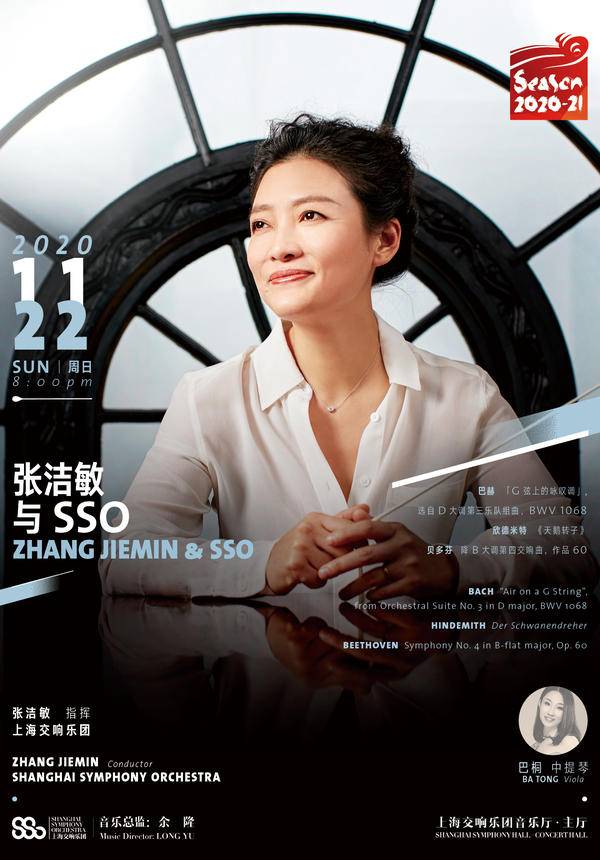 Venue:
Shanghai Symphony Hall - Concert Hall
1380 Fuxing Zhong Lu Xuhui Shanghai
Date:
11/22/2020
This ticket is only available as an e-ticket
After you have joined the waiting list, you will be notified if tickets become available via SMS.

*Program is subject to change.

ZHANG Jiemin has a great wealth of experience in conducting operas in Europe, especially in Italy. The experience has laid a foundation for her outstanding performance of operatic and symphonic music. From 1997 to 1999, she conducted Bizet’s opera Carmen, and Puccini’s operas La Boheme and Turandot in the Latvia State Opera House. In 1997, she became an assistant conductor to the famous conductor Zubin Mehta and worked at the Teatro di Fiorentino. During this period, she acted in Puccini’s opera Turandot in Beijing as the assistant conductor to Zubin Mehta. In 2001, she served as an assistant conductor of the Toulouse National Symphony Orchestra at the invitation of the famous French conductor Michel Plasson. In 2006, she conducted the closing concert of the Carnevale di Venezia at the Teatro La Fenice, and then raised her baton over the orchestra of this opera house during its touring performances at several music festivals held in Italy. In 2007, she conducted Verdi’s opera La Traviata in Madrid, Spain, Puccini’s opera Turandot at the Teatro La Fenice, and Mascagni’s opera Cavalleria Rusticana at the Teatro di San Carlo, Napoli, Italy, becoming the first female conductor to conduct opera performance in the most prestigious opera houses in Napoli and Venice. In 2008, she conducted the New Year’s Concert at the Teatro di Salerno, Italy. In the same year, she worked with the Roma Sinfonietta in giving a performance in the Vatican Sala Nervi. In 2009, she joined many performances in the music season of the year at the Teatro di Catania, Sicilia, Italy and conducted Rossini’s opera Il barbiere di Siviglia in the summer opera season on invitation. In addition, she worked once again with the Teatro La Fenice on Stravinsky’s orchestic musical A Soldier’s Story.

Since taking over the Shanghai Philharmonic Orchestra as its resident conductor in 2010, she has spared no effort to promote the development of the orchestra. In April 2011, she cooperated with the pianist Yuja Wang in holding a concert of Prokofiev’s works and performed the impressive Symphony No.5; in August 2011, under her leadership, the Shanghai Symphony Orchestra partnered with the Shanghai Peking Opera Troupe in premiering the symphonic Peking Opera Women Generals of the Yang Family, receiving widespread attention from media. As is evaluated in Wenhui Daily, “Under ZHANG Jiemin’s baton, the ‘Chinese and Western orchestras’ have played symphonic music magnificently.” In November of the same year, ZHANG Jiemin conducted a concert titled “The Rite of Mountains and Magic Toyshop” at the Shanghai Oriental Art Center. Italian composer Respighi’s rarely heard work The Magic Toyshop was played at the concert, broadening the orchestra’s horizons and expanding its repertoire. ZHANG Jiemin also received high praise from the maestro Riccardo Muti.

Venue:
Shanghai Symphony Hall - Concert Hall
1380 Fuxing Zhong Lu Xuhui Shanghai
Date:
11/22/2020
This ticket is only available as an e-ticket
After you have joined the waiting list, you will be notified if tickets become available via SMS.