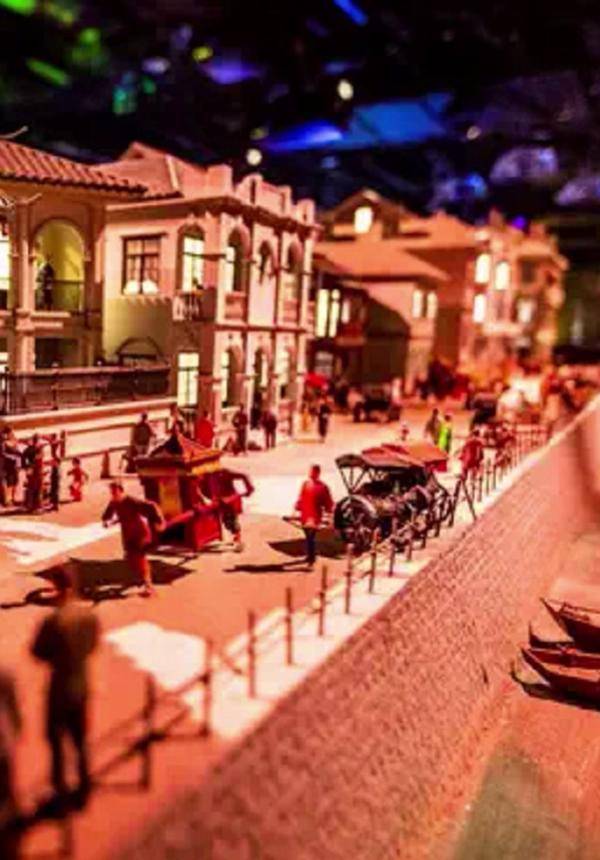 Yu Garden invites you to an exciting field trip! The theme park "Yumeng Miniature World·Magic City 400 Years" will be opened to the public on February 6 on the B1 floor of Tianyu Building, Shanghai Yuyuan Department Store.

This is the first interactive interpretation of miniature architecture + mechanical art + digital multimedia in Shanghai!

The theme park of the city's history~ 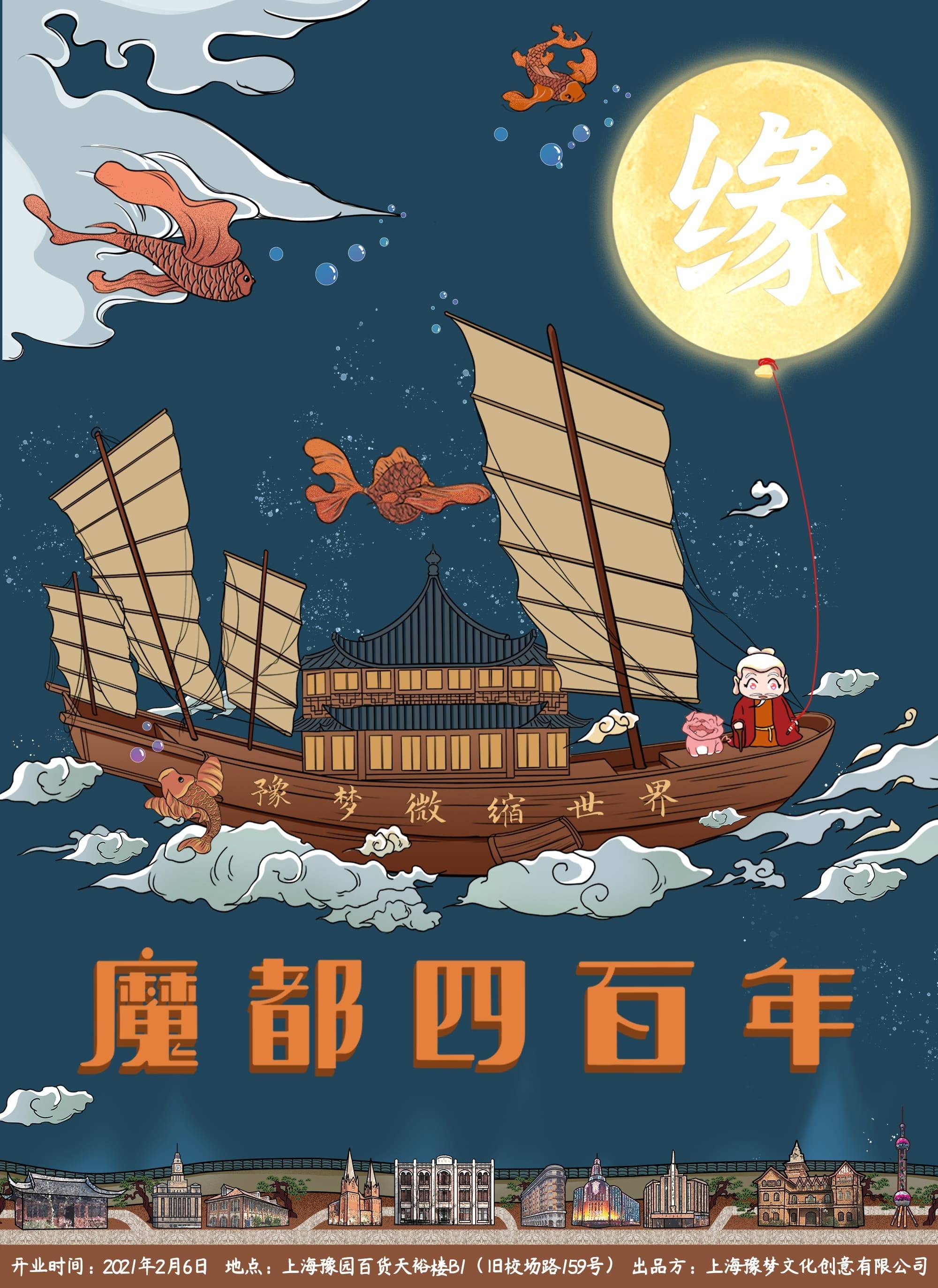 Experience the warm historical details and humanistic stories in China, buy early bird tickets, and explore Shanghai you have never seen before at great value.

Seeing is believing! 500+ miniature architectural landscapes, 10000+ miniature characters, 400 years through the magic capital are waiting for you~

Yumeng Miniature World·Magic City 400 Years Theme Park takes five sections as main narrative lines: "Encounter" Garden on the Sea, the Confluence of the River and the Sea, the Battle of the North Gate, the Best of the Chinese Realm, and the Modern Times.

In the 1500-square-meter exhibition area, it took 110 model art masters to create more than 500 miniature architectural landscapes in two years... but the audience get to "travel" through the 400-year-old vicissitudes of life in the magic capital in one day!

The Mahler Villa restored in a scale of 1:9 is a must- The building has been dynamically divided, and visitors can walk through the middle of the Mahler Villa.

The Yu Garden, a famous garden in the south of the Yangtze River in the Ming Dynasty, was reproduced at a scale of 1:30 and presented on a large 13-meter sand table.

The dynamic miniature models of Shanghai's landmark buildings such as Wukang Building and Mohai Library are restored at a super-large scale of 1:15.

Every detail in the building can stand the test of a magnifying glass...

A storyteller wearing a blue-gray gown took the stage in the Yu Garden Huxinting Teahouse. He held a folding fan and painted an ink literati painting on the fan that was as small as a fingernail. In the temple market along the street, there are layers of steamed buns, pear paste candy, and duck blood vermicelli soup, waiting to be served. In the Yangshan Hall, nearly 50 figures with different shapes fully performed the pomp of Liu Ruifang, the Shanghai Taoist Terrace, in "Festival in Yuyuan Garden in the Gengchen Year of Guangxu", where Prince Sun Hairich of Germany was invited to enjoy Kunqu Opera together.

It took half a year to visit and research, and 1 million words of historical materials!

The team spent half a year reading more than 1 million words of domestic and foreign papers, books and video materials.

The historical data spanned from the establishment of the Yu Garden in 1559 to the Battle of Songhu in 1937. After visiting the streets and alleys of Shanghai several times and consulting experts in Shanghai history, the story of 400 years of Shanghai is finally presented to you.

Many little-known details have been restored!

For example, Mohai Bookstore, the earliest modern publishing house in Shanghai, actually used ox-pulled carts as the driving force to drive the iron printing presses to run rapidly. The whole process of movable type printing that combines Chinese and Western will be completely restored in the theme park, waiting for you to print a commemorative newspaper for yourself.

A Sino-British match is being played on the soccer field in the middle of the Yiyuan Dog Run.

In 1938, a British football team called "Islington Corinthians" held a world tour, and Shanghai was one of them. In addition, the stories of celebrities who once stayed in Wukang Building will also be reproduced. After the outbreak of the Pacific War, the stock of Jiadi Huo Oil Property Company soared, and the manager who made a fortune happily counted the banknotes; in a romantic moment, Sun Daolin, the star of "Eternal Wave", proposed to Yue Opera actor Wang Wenjuan...

This is not only a personal story, but a public memory.

The model buildings in the exhibition area can be lifted, opened and closed, and even divided. People can not only overlook the whole picture from top to bottom, but also can probe into the Paramount to take a selfie, contact Xujiahui Catholic Church at zero distance, and walk into the Mahler Villa where everything is two. Sharing the little master's dream journey...

The innovative interpretation of multimedia is one of the highlights of the theme park of "Yumeng Miniature World: Four Hundred Years of Magic City". AI technology, electronic sensing, naked-eye 3D, phantom imaging, and digital real-time interaction combine virtual and reality to make the viewing tour of each exhibition hall no less than a blockbuster.

Do you want to experience a Shanghai Xiaodao encounter with the French invasion army and the Qing army's North Gate battle?

The roar of cannons, the sky dyed red by gunpowder, the cracked city wall, and the narrow road where thousands of troops meet... and you are just a stone's throw away from watching the turning point of history.

Nearly 70 interactive experience installations allow people to participate in the vivid urban stories- A jewelry robbery in the 1930s is taking place on Xiafei Road. Do you choose to save people or catch criminals?

Stories are divided by choices. Draw a ball on the circus wheel and the mystery jackpot could be yours!

In the theme park, almost every scene is set up with interactive links!

If you walk to both sides of the Yangjingbang and speak the "standard" Yangjingbang language into the microphone, you can control the model through 6 voice-calling devices, turn on the pass-through mode, and unlock the story in the building step by step.

You can have a real dog race at Yiyuan Dog Run...

You only need to make a bet based on your intuition, wait for the starting gun to fire, and you will see the racing dog rushing out with a monkey on it. At this moment, please slap the cheers button in front of you and cheer for the dog you picked!

After the competition, the winner will also receive a beautiful gift~

In 2008, at the invitation of Yuefu of Han and Tang Dynasties, he performed "Luoshen Fu" in combination with new media art in Huangtaiji Hall of the Forbidden City in Beijing. In 2011, at the National Palace Museum in Taipei, he created "Huang Gongwang's "Fuchun Mountain Residence" New Media Art Special Exhibition", which set a record of 90-day exhibition period, nearly 900,000 visitors and sales of 15 million yuan of derivative products!

▲"Liu Ying" this time, he has created a number of large-scale new media art works for Yumeng Miniature World: Magic City 400 Years Theme Park, such as the AR new media art wishing pool, and the Dangdang car that can travel through the past and present life of the Magic City etc.

▲ In Lin Junting's creation of "He Cai-Cloud Dance", the singer dances on the gramophone; the elf slowly slips out of the closet; the windows of the dangdang car are capturing your emotions... Only by experiencing it yourself can you gain an artistic level moved.

▲ "Tianchi" What are the days of singing and dancing in Yuyuan Garden?

How to reproduce the modern Xiafei Road of the past? What kind of stories will the old objects in the home tell? ...the answer is in the theme park of "Yumeng Miniature World: Four Hundred Years of Magic City"