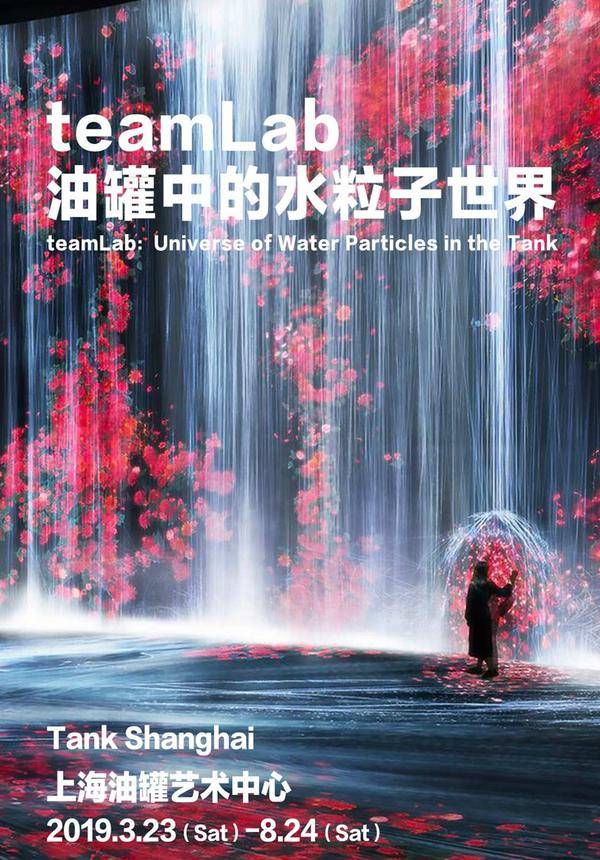 - Receive E-ticket via Email
- Show Your E-ticket @ Venue
- No Cancellation
TeamLab comes to the iconic TANK Shanghai museum in China to hold an immense inaugural exhibition. "teamLab: Universe of Water Particles in the Tank" turns a massive former oil tank into an interactive, ever-changing art space, exploring a continuity among people, as well as a new relationship that transcends the boundaries between people and the world. Runs from March 23 - August 24, 2019 at TANK No.5.
Featured Works 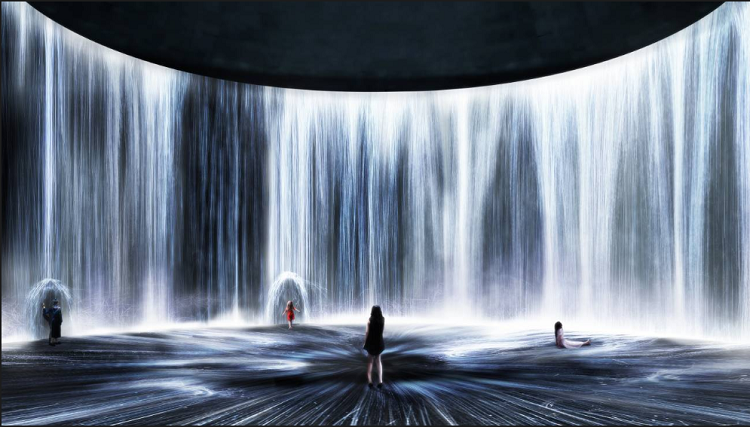 Universe of Water Particles in the Tank, Transcending Boundaries
teamLab, 2019, Interactive Digital Installation, Sound: Hideaki Takahashi
An enormous waterfall cascades down the interior of the Tank, transcending boundaries and influencing other artworks.
Water is represented by a continuum of numerous water particles. The interaction between the particles is calculated and then lines are drawn in relation to the behavior of the water particles. The lines are “flattened” using what teamLab considers to be ultra subjective space.
When people stand on or touch the waterfall, they obstruct the flow of water like a rock and the flow of water changes. The flow of water continues to transform due to the interaction of people. Previous visual states can never be replicated, and will never reoccur.
The water causes the flowers of Flowers and People, Cannot be Controlled but Live Together artwork to scatter. 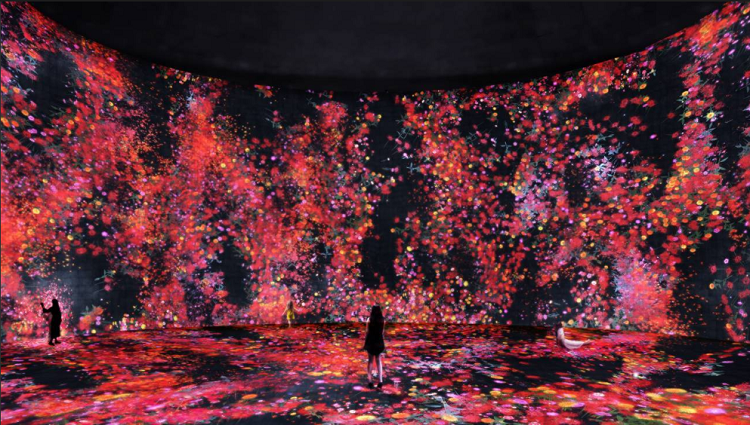 Flowers and People, Cannot be Controlled but Live Together, Transcending Boundaries - A Whole Year per Hour
teamLab, 2017, Interactive Digital Installation, Sound: Hideaki Takahashi
This artwork is in continuous change, transcending the boundaries between itself and other works. Over a period of one hour, a year’s worth of seasonal flowers blossoms and scatters.
Flowers are born, grow, bloom, and eventually scatter and die. The cycle of birth and death repeats itself in perpetuity. If people stay still, more flowers are born. If people touch the flowers and walk around the space, the flowers scatter all at once.
This artwork is in continuous change, neither a prerecorded animation nor on loop. The work is rendered in real time by a computer program. The interaction between the viewer and the installation causes a continuous change in the artwork; previous visual states can never be replicated, and will never reoccur.
The water from the Universe of Water Particles in the Tank artwork influences this work, causing the flowers to scatter.
In spring in the Kunisaki Peninsula, there are many cherry blossoms in the mountains and rapeseed blossoms at their base. The abundance of flowers caused teamLab to wonder how many of these flowers were planted by people and how many were native to the environment. It is a place of great serenity and contentment, but this expansive body of flowers is an ecosystem influenced by human intervention. The boundary between the work of nature and the work of humans is extremely vague. Rather than nature and humans being in conflict, a healthy ecosystem is one that includes people. Unlike people of today, people in the past understood that humans cannot grasp nature in its entirety, and that it is not possible to control nature. Perhaps these people, who lived more closely aligned to the rules of nature, created this comfortable natural environment. 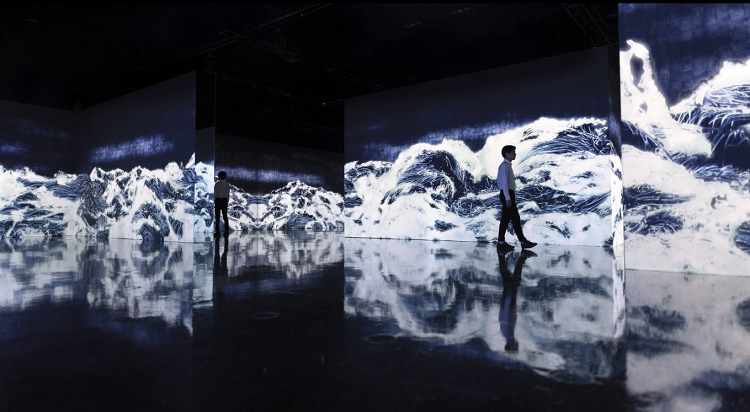 teamLab, 2019, Digital Installation, Continuous Loop, Sound: Hideaki Takahashi
This is an installation made of one continuous wave. The waves projected are all connected and form a single, unbroken body of water. As we immerse and meld ourselves into the waves, we explore a continuity among people, as well as a new relationship that transcends the boundaries between people and the world.
The movement of waves in water is simulated in a computer-generated three-dimensional space. The water is expressed as a continuous body after calculating the interactions of hundreds of thousands of particles. To visualize the waves, the behavior of the particles of the water was then extracted and lines were drawn in relation to the movement of the particles. The wave created in a 3-D space is then turned into artwork in accordance with what teamLab refers to as ultrasubjective space.
In premodern Japanese painting, oceans, rivers, and other bodies of water were expressed as a series of lines. These lines give the impression of life, as though water was a living entity.
This form of expression leads us to question why premodern people sensed life in rivers and oceans. Also, why did they behave as if they themselves were a part of nature? Perhaps something can be discovered by fusing the fixed objective world of today’s common knowledge with the subjective world of premodern people.
While viewing this artwork, if we feel a sense of life in the collection of lines—what can be called the subjective world of premodern people—then perhaps this is one aspect of objective recognition.
When viewing this artwork, as opposed to watching waves shot with a video camera, people may feel that the barrier between themselves and the waves disappears. They feel immersed in the work, perhaps even feeling life in the collection of lines, as if the waves are luring them in. Perhaps we can find a connection to the way premodern Japanese people perceived the world and consequently behaved toward the world.
If we regard ourselves as a part of nature, and consider nature not just as something to be observed, we might join premodern people in perceiving rivers and oceans as living entities. This is a way of seeing the world that lures us in and allows us to feel that there is no boundary between ourselves and nature. Continuous Life and Death at the Now of Eternity
teamLab, 2017, Digital Work, 9 channels, Endless
In the flow of time of reality flowers are born, bud and bloom, then in the course of time they wither and die. The flowers are eternally repeating the process of life and death.
The world of the artwork becomes brighter with the sunrise where it is located, it becomes darker as the sun sets. The flowers that bloom change throughout the period of one year.
The artwork is rendered in real time by a computer program. It is neither a prerecorded animation nor on loop. As a whole, it is continuously changing and previous visual states are never replicated. The picture at this moment can never be seen again.

Impermanent Life, at the Confluence of Spacetime New Space and Time is Born
teamLab, 2018, Digital Work, 4 channels, Continuous Loop
In the background, cherry blossoms bloom and scatter, the cycle of life and death repeats itself.
From the countless background points, at a certain rhythm and interval, a circle is born that grows and spreads out radially. The circle born transforms only the light and darkness of the background world. 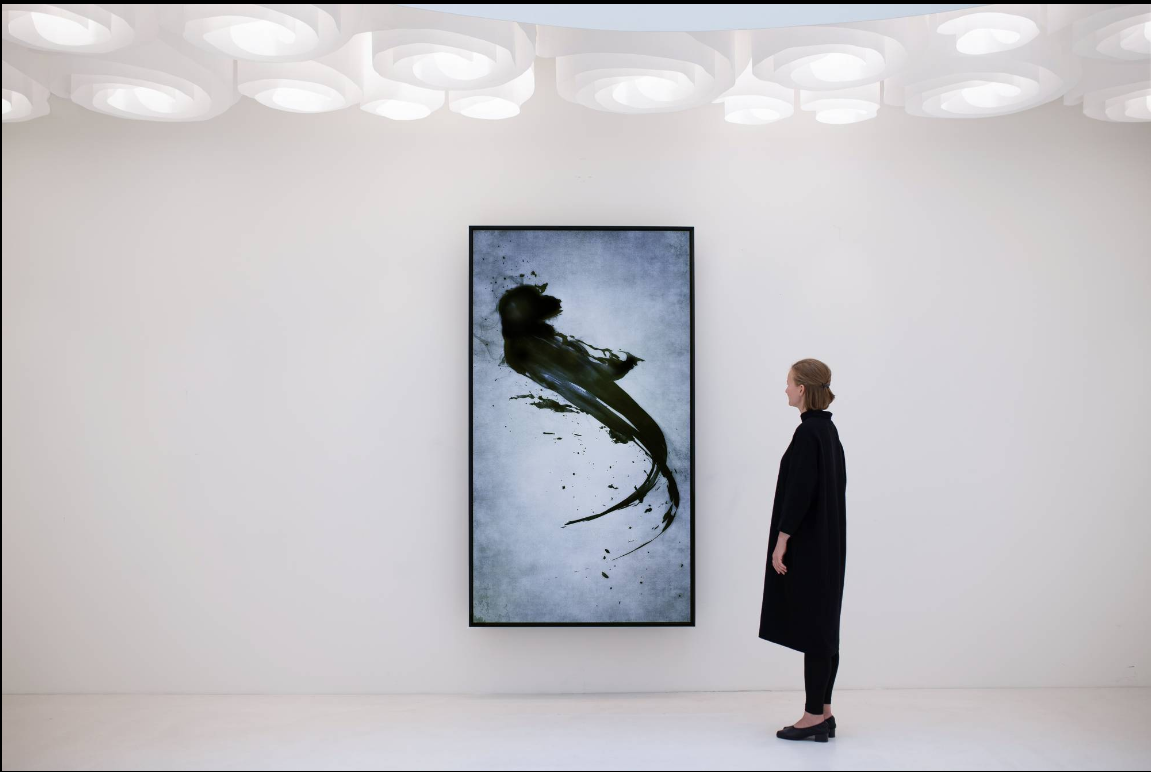 Enso
teamLab, 2017, Digital Work, 18min 30sec (loop)
Enso is the Zen practice of drawing a circle with a single brush stroke. This artwork depicts an Enso drawn as Spatial Calligraphy. The brush stroke is suspended in space but the viewpoint changes to reveal the circle Enso. teamLab has been working on Spatial Calligraphy since the collective formed. A new interpretation of traditional calligraphy, Spatial Calligraphy reconstructs calligraphy in three-dimensional space and expresses the depth, speed, and power of the brush stroke.
In Zen, ensō is a circle that has since ancient times been written with canes or sticks in midair. It is said to represent enlightenment, truth, the entirety of the universe, and equality. The circle also reflects the hearts and minds of those who view it, with its interpretation left to the individual.