👉 Children must enter with ticket 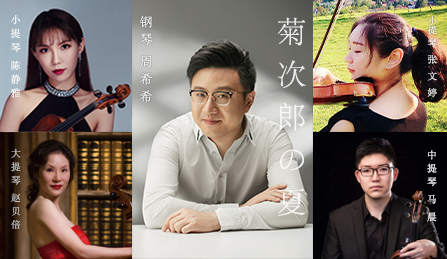 The superb performances, professional and excellent repertoire compilation, and unique program arrangement of domestic first-class musicians have made its national tour climaxes one after another.

Over the years, its performance quality and artistic level have been well-known. Some viewers commented after watching the concert: "This is the best Hisaishi concert in China!"

The birth of this concert was the first for a piano quintet to perform Joe Hisaishi's music. Since then, "Jo Hisaishi Works Concert" has spread all over the country. "Summer" is cheerful and enthusiastic;

"One Summer's Day" in "Spirited Away" is pure and sincere;

The ethereal piano version of "Laputa in the Sky" exudes a touch of sadness;

The long-lost innocence of "海の见える街" (also known as "The Changing Seasons") in "Kiki's Delivery Service" touched the hearts of the audience;

The theme music of "Kiki's Delivery Service" played by piano and violin is beautiful;

The "Avenue of Wind" in "My Neighbor Totoro" played by piano and cello became a beautiful scene in the concert.

In order to avoid confusing the audience, there will be no interference from the movie screen at the concert site, and the audience will fully appreciate the high-level performance of the musicians, listen to the wonderful music, and feel the unique charm of the scene.

1. TOTORO is selected from the movie "My Neighbor Totoro" Joe Hisaishi / song

3. The promise of the world/the merry-go-round of life is selected from the movie "Howl's Moving Castle" Yumi Kimura/Jo Hisaishi/Qu

From the movie "My Neighbor Totoro" Joe Hisaishi / Song

7. ONE SUMMER`S DAY is selected from the movie "Spirited Away" Joe Hisaishi / song

8. THE WIND OF LIFE from the movie "BROTHER" Joe Hisaishi / song

9. SUMMER is selected from the movie "Summer of Kikujiro" Hisaishi Joe / song

10. BALLADE is selected from the movie "BROTHER" Joe Hisaishi / song

12. HANA-BI is selected from the movie "Huahuo" Joe Hisaishi / song

14. Laputa in the Sky From the movie "Castle in the Sky" Joe Hisaishi/Qu

Note: Actors, repertoire and order are subject to the live performance of the day! Joe Hisaishi will not participate in this concert!

A young pianist in the United States, a piano teacher at Nanjing University of the Arts. As a soloist, he has performed music in music halls in major cities in North America and China, including Carnegie Hall in New York, Corning Center for the Arts, Jordan Hall in Boston, Felton Opera House in Lancaster, Jackson City Hall in Mississippi, and Carnegie Hall in Canada. Gary and the Seymour Center in Sydney, Australia, etc.; have been invited to hold concerts in Beijing Zhongshan Concert Hall, Shanghai Concert Hall, Guangzhou Xinghai Concert Hall, Shenzhen Grand Theater and mainstream concert halls in major cities in China. Boston's WGBH radio station broadcast live from his concert at Jordan Hall. Orchestras he has worked with include NEC Philharmonia, Atlantic Symphony Orchestra, Lancaster Symphony Orchestra, Great Boston Asian-American Youth Orchestra, Louisiana Symphony Orchestra, Mississippi Symphony and Chorus, EndlessMoutain Music Festival Orchestra, Shanghai Conservatory of Music Youth Symphony Orchestra and Nanjing Philharmonic etc. Since 2016, he has been invited to be a special performing artist of the "EndlessMoutain" music festival in Pennsylvania, after which he will continue to give concerts and teach master classes at the festival every year.

With his outstanding performance, he has been highly appreciated by many famous pianists at home and abroad, such as Leon Fleischer, Ugorsky, Fu Cong, etc. The world-renowned pianist Alfred Brendel once praised his performance: "His performance not only has amazing skills, but at the same time you can feel the profound philosophy in his music, which produces infinite resonance. .”

Master of Violin at the Vienna State University of Music and Performing Arts, Austria. He has studied piano with Professor Zhao Danqing since he was a child. In 2008, he was admitted to the Shanghai Conservatory of Music, under the tutelage of Associate Professor Yuan Jiamin. In 2012, he was awarded the title of Outstanding Graduate of Shanghai. In the same year, he was recommended to the Graduate School of Shanghai Conservatory of Music, where he studied under the famous violin educator Professor Ding Zhinuo.

From June 2015 to March 2019, he studied at the National University of Music and Performing Arts in Vienna, Austria, studying for a master's degree in chamber music, and followed Professor Johannes Meissl, Dean and Professor of the Haydn Chamber Music Academy and Artistic Director of the European Chamber Music Academy. The New Power Quartet she belongs to has participated in a series of master classes held by the European Academy of Chamber Music in various countries, such as in Vienna/Grafenegg (Austria), Oslo (Norway), Fiesole (Italy), Pula Germany (France), Vilnius (Lithuania), The Hague (Netherlands), etc. And various international music festivals, such as Harmos Festival Chamber Music Festival (Portugal), Ravenna Festival Ravenna Music Festival (Italy), Allegro vivo Music Festival and Master Class (Austria), etc. As a member of New Power, he has participated in many international chamber music competitions and won awards. He won the championship of the String Quartet in the 7th Haydn International Chamber Music Competition. ; In September 2017, he won the third place at the 9th Trondheim International Chamber Music Competition in Norway. In February 2018, he won the first prize of the string quartet in the 10th Graz International Franz Schubert and Modern Music International Competition.

In 2015 he was admitted to the Morningside Music Bridge in Calgary, Canada, and became one of the youngest members of the programme. 2017 he won third place in the first string competition at the Shanghai Conservatory of Music. 2017 he was admitted to the first batch of the SSE-Emperor's Incubation Programme with a full scholarship. "In 2017, he was accepted by Morningside Music Bridge and performed as a soloist at the Jorden Hall Concert Hall of the New England Conservatory of Music in the USA.