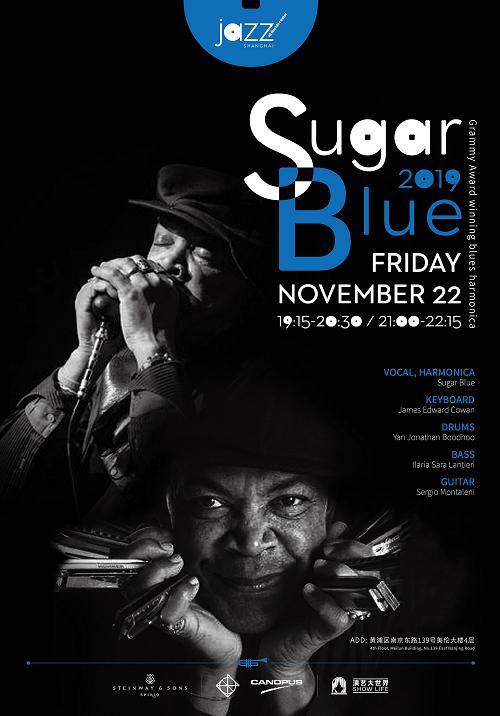 - No Cancellation
- Receive E-ticket via Email
- Show Your E-ticket @ Venue
- All Attendees Require a Ticket
Grammy Award-winning harmonica virtuoso Sugar Blue is not your typical bluesman...
Born James Whiting - he was raised in Harlem, New York, where his mother was a singer and dancer at the fabled Apollo Theatre. He spent his childhood among the musicians and show people who knew his mother, including the great Billie Holiday, and decided that he wanted to be a performer.
Blue received his first harmonica from his aunt, and proceeded to hone his chops by wailing along with Bob Dylan and Stevie Wonder songs on the radio, he was soon to be influenced by the jazz greats such as Dexter Gordon and Lester Young. Sugar Blue has used this background to his advantage, though, creating an ultra-modern blues style and sound that is instantly recognizable as his own.
While in France, Blue hooked up with members of the Rolling Stones , who instantly fell in love with his sound. The Stones invited Blue to join them in the studio. Besides his work on the Some Girls album, he can be heard on Emotional Rescue and Tattoo You . He appeared live with the group on numerous occasions and was offered the session spot indefinitely, but he turned it down, opting instead to return to the States and put his own band together rather than became a full-time sideman. Before returning to the U.S. in 1982, Blue cut a pair of albums, Crossroads and From Paris to Chicago.
Keyboard: James Edward Cowan
Drums: Yan Jonathan Boodhoo
Bass: Ilaria Sara Lantieri
Guitar: Sergio Montaleni