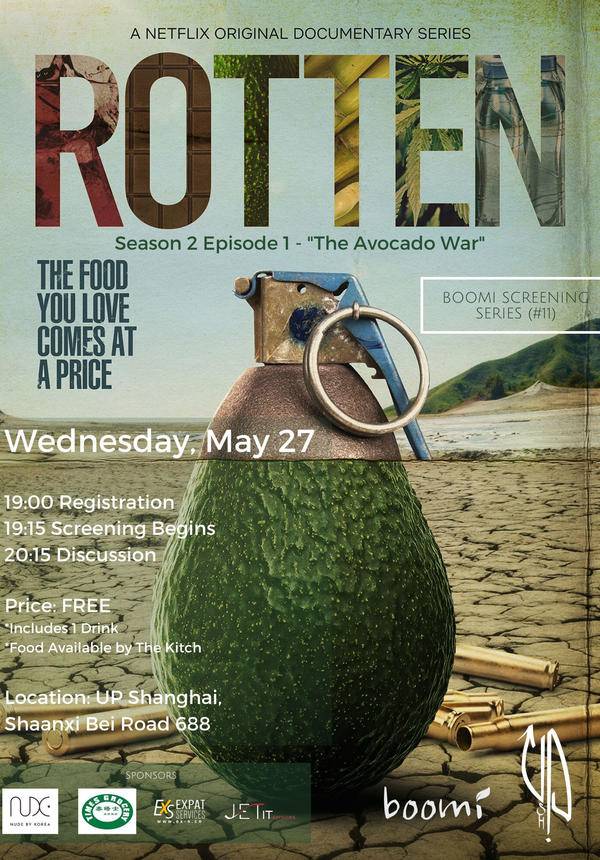 Venue:
UP Shanghai
688 Shanxi Bei Lu Jing'an Shanghai
Date:
5/27/2020
This ticket is only available as an e-ticket

Rotten is an American television show produced by Zero Point Zero. It focuses on problems in the process of supplying food. The show's first season was released on Netflix in January 2018, and the second season in October 2019. Each show deals with one food product and shows interviews with manufacturers, distributors, and others involved in the process. It also highlights several criminal cases brought against these people.

For our screening, we will be showing Season 2, Episode 1 - The Avocado War

The avocado's rise from culinary fad to a must-have superfood has made it a lucrative crop -- and a magnet for money-hungry cartels.thes.

*All tickets include a drink and a raffle ticket

*Food will be available by The Kitch

Venue:
UP Shanghai
688 Shanxi Bei Lu Jing'an Shanghai
Date:
5/27/2020
This ticket is only available as an e-ticket