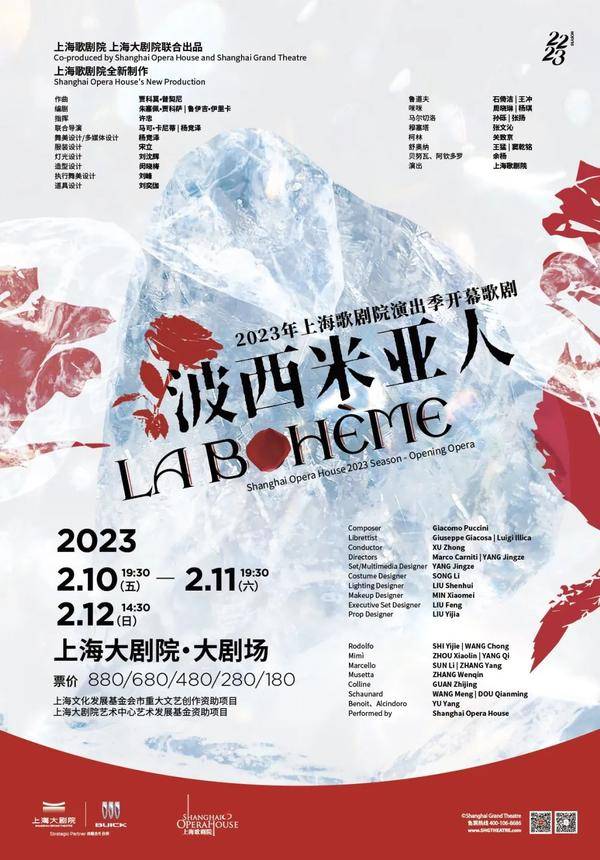 The opera "La Boheme" is a classic four-act opera by the Italian opera master Puccini, which premiered in Italy in 1896. As one of Puccini's three most popular operas, "La Bohème" has also become a symbol of the composer's formal approach to authentic opera creation. The story of the opera is based on the French novel "Scenes from the Life of a Bohemian" by Henri Mulger, which sings the praises of free life and youthful love. And famous arias such as "Cold Little Hands", "People Call Me Mimi" and "Walking on the Street" in the play have touched the hearts of countless people, making it a classic play loved by audiences all over the world.

In February 2023, the newly produced "Bohemians" will be directed by Xu Zhong, the dean of the Shanghai Opera House, a famous conductor, and pianist. The famous tenor Shi Yijie will be invited to join hands with the Shanghai Opera House again to star in the show. The first Puccini opera of his opera career. At the same time, the famous Italian drama and opera director Marco Canetti and the unique Chinese director Yang Jingze will also cooperate for the first time in this version of "La Bohème", bringing you full of visual impact and sense of the future , a stage presentation with a distinctive Shanghai-style temperament. Internationally renowned Chinese conductor and pianist, currently the president of the Shanghai Opera House, the chief conductor of the Verona Summer Music Festival/Opera House in Italy, the chairman of the International Opera at the Royal Welsh Academy of Music and Drama, the external commentary of the Cardiff World Singer Competition in the UK Expert, independent non-executive director of NetEase Cloud Music. From 2012 to 2015, he served as the artistic director and chief conductor of the Bellini Opera House in Italy, becoming the first Asian musician in history to hold this position in a famous Italian theater. From 2013 to 2019, he served as the music director and chief conductor of the Israel Haifa Symphony Orchestra, becoming the first Chinese musician in the history of Israeli music to serve as the director of the orchestra. 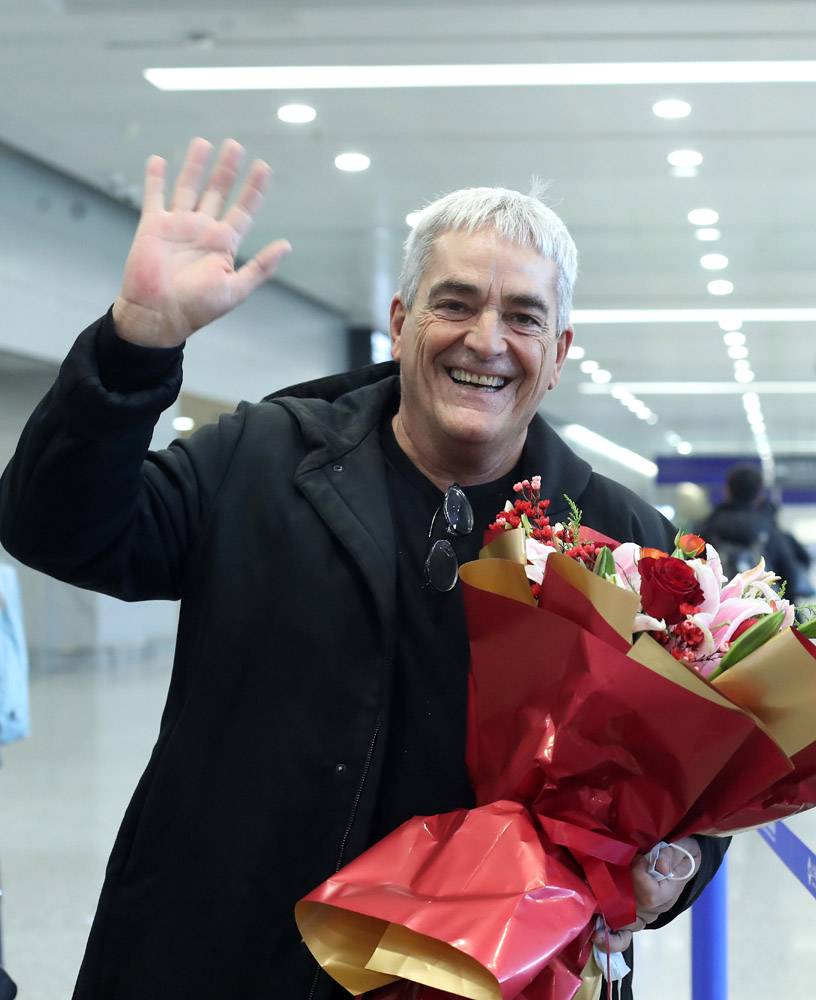 Born in Milan, Italy in 1963. Initially studying dance, he switched careers as an actor and began training and working as a theater and opera director.

As a screen actor, he has worked with Federico Fellini in L'intervista and with Hanna Schygulla and Marcello Mastroianni in Miss Arizona. He worked with Giorgio Strehler for 6 years at the Teatro di Milano, Italy, as a director's assistant. He also received additional directing training at UCLA under the tutelage of J. Grotowsky and Bob Wilson.

Operas he has directed include The Country Cavalier, The Harlequin, La Traviata, The Marriage Newspaper, The Barber of Seville, Anna Polena, Nabucco, The Mercy of King Tito, Fidelio, Werther, Rigoletto, Theatrical Manager, Soul Showgirl, etc.; directed theater works include: A (Not) Human Voice, Othello, As You Wish, Lovers "Richard III", "As You Wish", "Love's Lost", "The Taming of the Shrew", "Don Quixote", "The Little Prince" and so on. 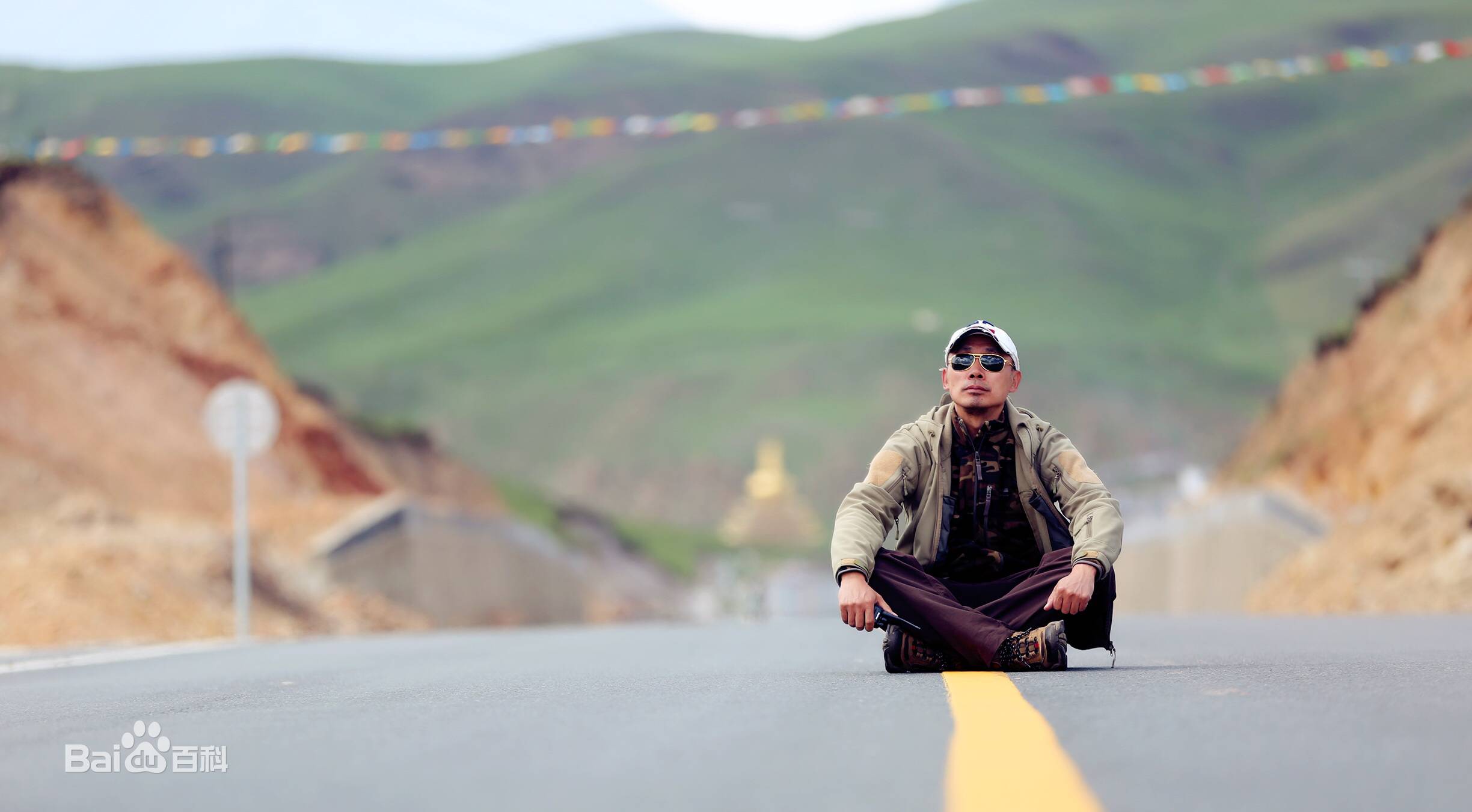 Graduated from the Directing Department of the Central Academy of Drama. He is good at meticulously starting from life experience and forming a unique video style in the grand narrative. The film works he has directed include "Love in the Sky Mountains", "Don't Let Mom Cry", "The Robbery", "Emotional Life" and "Ugly Mother", documentary works include "Little Living Buddha"; stage works include sci-fi opera "Seven Days", drama "Bashang West Sichuan", the musical "Emotional Life" (adapted from the film of the same name), etc. The film "Emotional Life" directed by him won the Best Newcomer Award at the Macau International Film Festival of China. 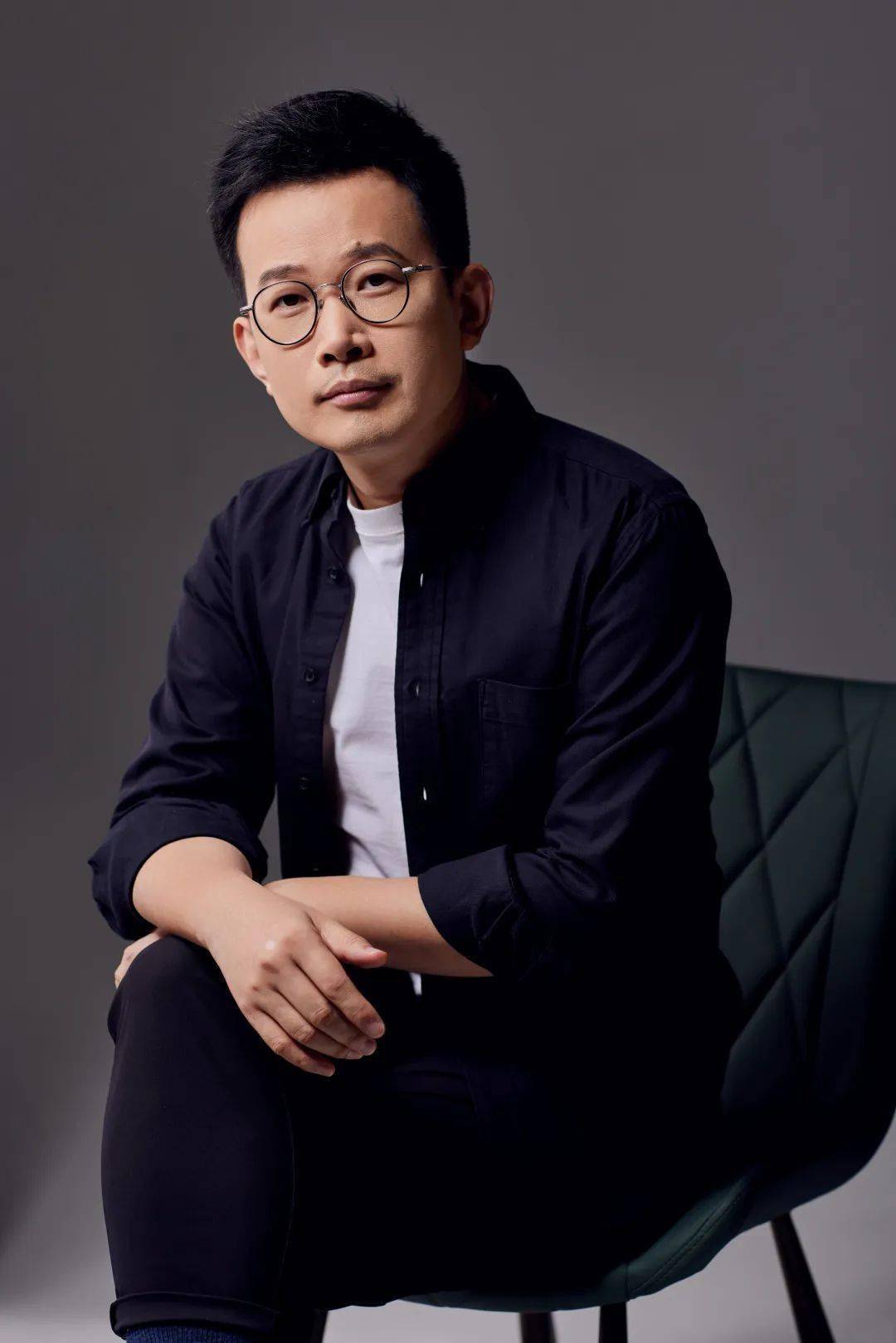 Chinese tenor singer, graduated from Toho University of Music in Japan, and is currently a distinguished professor at the China Conservatory of Music.

In 2006, he received a full scholarship from Toho University of Music and went to study in Austria. In 2007, he won the first prize in four international vocal music competitions including Ferruccio Tavilia, Totti Dale Monte, Maria Canilla, and Passau Arts Festival in Germany within half a year; in the same year, he starred in Wrote the first opera "Woman's Heart" in her career. Since 2008, she has participated in the "Rossini Opera Festival" for five consecutive years, becoming the first Chinese singer to participate in the festival. In 2010, he held a solo concert in London; in the same year, he debuted on the Chinese stage as a leading actor and participated in the world premiere of the opera "Ode to Farewell". 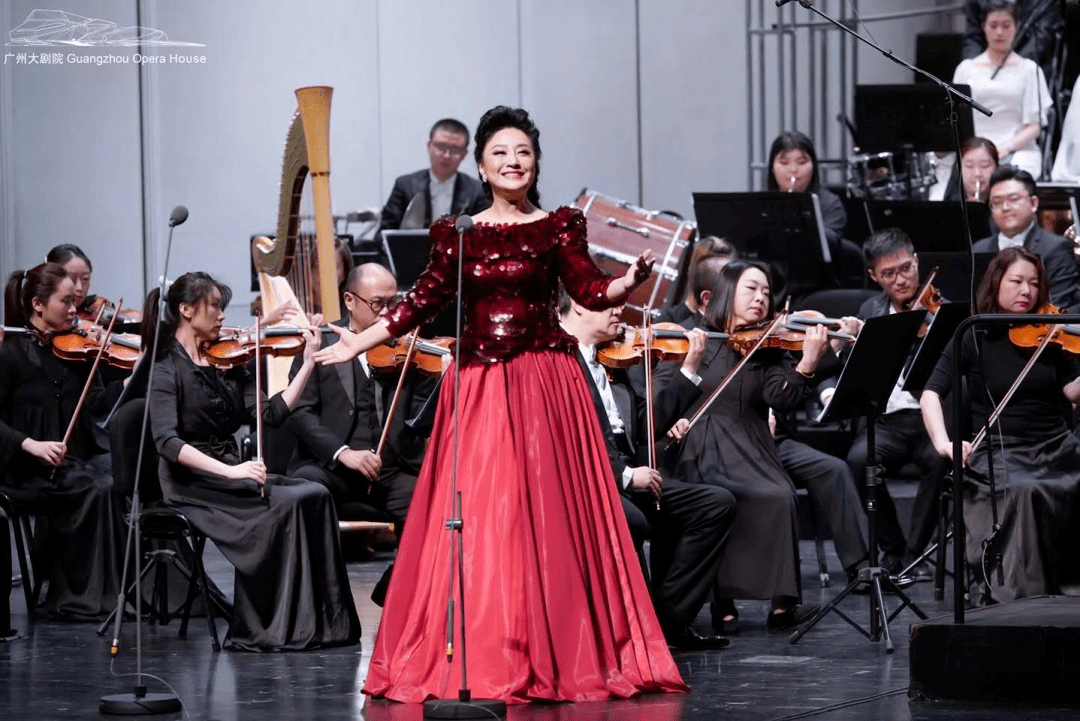 Chinese soprano singer and opera singer of the National Center for the Performing Arts. Graduated from the Opera Department of the Central Conservatory of Music, she was a soloist in the Song and Dance Troupe of the General Political Department. He has won the Gold Award of the "Golden Bell Award", the second prize of the Wenhua Vocal Music Program Performance of the Ministry of Culture (Government Award), the Silver Award of the CCTV Young Singer Grand Prix, the German New Voice and other international vocal music competition awards, and the opera "Big Han Su Wu" won the Wenhua Award, Central Propaganda Department "Five One Project Repertory Award". In 2012, she was honored as one of the "Top Ten Sopranos in China" by CCTV. The works involved are in various languages and styles. He has played the heroine in more than 20 Chinese and foreign operas, such as Yang Caihong in "The Female Teacher in the Mountain Village", Mimi in "Life as an Artist", and "Orphan of Zhao" Played Princess Zhuang Ji, played Violetta in "La Traviata", played Leonora in "The Troubadour", played Hu Niu in "Camel Xiangzi", and played Zhenyu in "Guest on the Iceberg". Gulandam, who played Amelia in "Simon Boccaneira", played the role of Narcissus in "The Narcissus", played Liu Er in "Turandot", and played Solo in "The Great Han Suwu". Inna and others. Famous Chinese and foreign conductors who have cooperated include Tang Muhai, Chen Zuohuang, Lu Jia, Yu Long, Yu Feng, Zhang Guoyong, Li Xincao, Lorraine Maazel, Vladimir Ashkenazi, Zubin Mehta, Zheng Mingxun , Antonio Pappano and others. While being active on the opera stage, he has also participated in many large-scale theatrical performances and foreign affairs performances. He has acted as a soloist and lead singer in CCTV Spring Festival Gala, National Day Gala, New Year Concert, August 1st Gala, and Double Support Gala many times. He has sung themes in the first and second "Belt and Road" International Cooperation Summit Forum, the Beijing Summit of the Forum on China-Africa Cooperation, the Summit of the Heads of State of the Shanghai Cooperation Organization, the BRICS Summit, the Asian Cultural Carnival of the Conference on Dialogue of Asian Civilizations, etc. work. 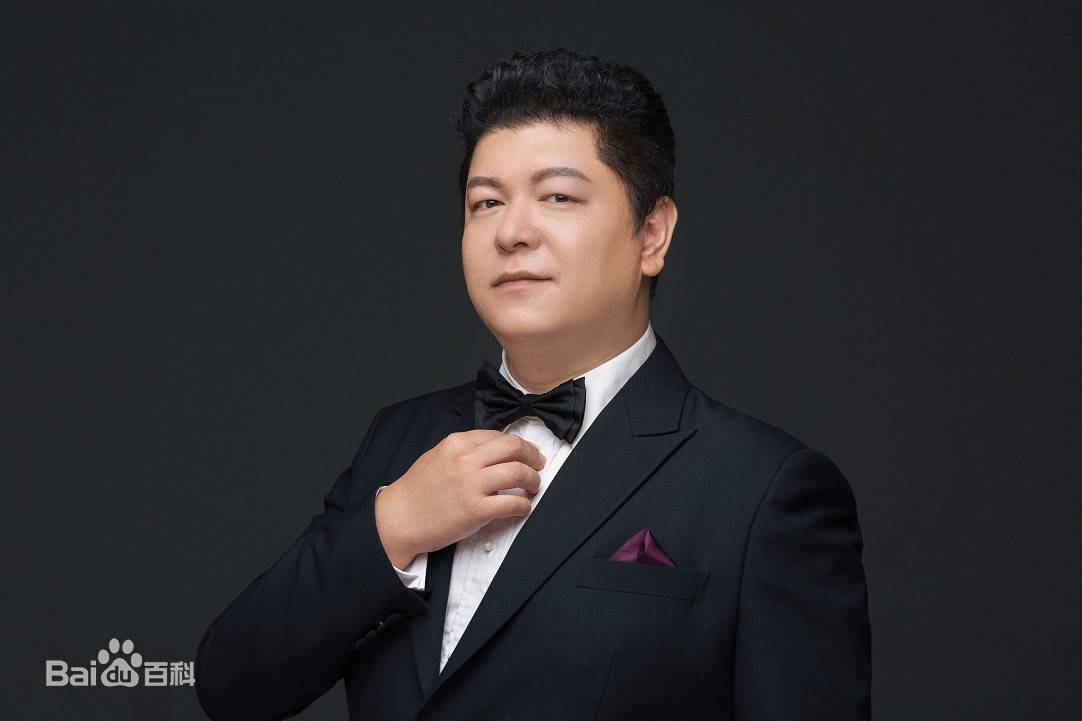 Tenor singer, resident opera singer of the National Center for the Performing Arts. Leading the leading role in many blockbuster operas produced by the National Center for the Performing Arts, including "Life as an Artist" as Rudolph, "The Troubadour" as Manrico, "The Long March" as Political Commissar Peng, "Camel Xiangzi" as Xiangzi, "Local Chronicles" Min" played Fang Zhimin, "Guest on the Iceberg" played Amir, "Summer Rainbow" played Li Wenguang, etc., and also played opposite "King of Opera" Placido Domingo in the opera "Macbeth" , played Macduff, and played the main roles in many operas such as "Tannhauser", "The Flying Dutchman", "Nuremberg Meistersinger", and acted as the song "Ode to Peace" in the "Millennium Covenant" of the Belt and Road Cultural Evening lead singer.

He once went to the United States for further studies, signed a contract with the San Francisco Opera House, one of the four major A-level opera houses in the United States, joined the Adler Young Artist Program of the theater, and played Eras in the opening epic drama "Troy" of the season, and played in "Lamermore's "Lukia" played Arturo, also participated in "The Magic Flute" and "Louisa Miller", and collaborated with the famous American pianist Martin Katz in a concert.