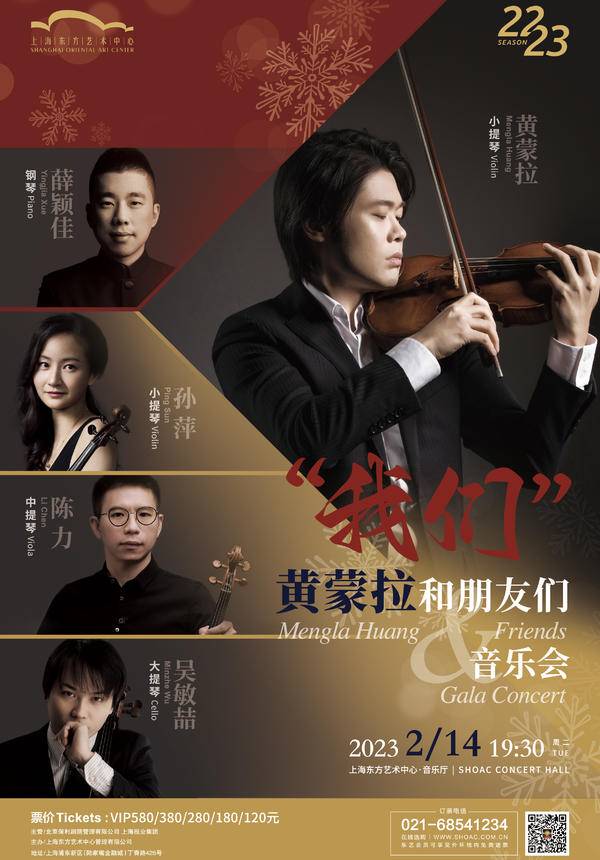 The theme of "we" is because everyone is very busy, and they keep talking about finding time to get together, but it is difficult. We musicians "entertain" friends with music, gather with friends in winter, communicate with each other and bring warmth through music. ——Huang Mengla

On February 14, 2023, the "Huang Mengla and Friends" concert, which has entered its fifth year, will be held as scheduled at the Oriental Art Center. Rather than saying that this is an art feast worth sitting on, it is better to say that it is a private classical music party where you can dance to the music. Let "we" become a "romantic event" exclusive to Shanghai every year.

Schubert  String Quartet in D Minor‘Death and the Maiden’

One of the most active violinists in the world today, he has won the gold medal in the Paganini International Violin Competition. His extraordinary performance skills and delicate and rich musical expression directly touch people's hearts, bursting out with light of reason and emotion, making the world's classical music world famous. The dumping.

Famous conductors who have cooperated include Nim Järvi, Jonathan Knott, Yu Long, Henrik Schaeffer, Edouard Diwalt, Tang Muhai, Lu Jia, Tovey Blainwell, Zhang Yi, etc. In recent years, Huang Mengla has devoted himself to polishing the personal concert of "Paganini's 24 Caprices" and the "In the Name of Concerto" string quartet concert, and completed more than 100 domestic and foreign tours of personal special concerts. As the first Chinese violinist to cooperate with the Universal DG brand, Huang Mengla and Universal Music Deutsche Grammophon exclusively published four "Yellow Label" albums: "Violin Show Pieces", "Violinissimo", "Paganini 24 Caprices", "Milonga del Angel", showing unique style and personal charm. As an associate professor of the Orchestral Department of the Shanghai Conservatory of Music, Huang Mengla also serves as a guest professor at the Royal Academy of Music, Japan's IMA and other institutions, and serves as a judge in music competitions such as the Sendai International Violin Competition, contributing to the excavation and training of the next generation of young musicians due contribution. He has also gained a high reputation in touring performances in various parts of Europe and America. He has held piano recitals and chamber music concerts in France, Italy, the Netherlands, Germany and other countries, and is often invited by major international music festivals to give solo and chamber music performances. Young violinist living in Britain, director of Shanghai Violin Professional Committee. He graduated from the Shanghai Conservatory of Music and the Royal Academy of Music successively, studied under the tutelage of Yu Lina, Diana Cummings and other professors, and studied chamber music with Prof. Thomas Brandis, the former principal of the Berlin Philharmonic, at the Lübeck Conservatory of Music in Germany. She is the recipient of a full scholarship from the Royal Academy of Music, an Alec Templeton Scholarship, and an honorary graduation concert.

In the UK, he won the first prize in the Edward Cooper Quartet Competition, the Leverhulme Chamber Music Award and many other awards. He has been active in solo and chamber music stages in various places such as Germany, Britain, France, etc., and has been invited to participate in many famous international music festivals such as Schleswig-Holstein Music Festival in Germany, Bristol Music Festival in Britain, Shanghai Spring International Music Festival, etc. In addition to solo and chamber music, she also has rich experience in orchestra performance. In 1999, he was admitted to the Asian Youth Symphony Orchestra.

In 2004, he was invited to join the Symphony Orchestra of the Schleswig-Holstein Music Festival in Germany, and conducted a two-month tour in Germany with conductors Christoph Eschenbach and Valery Gergiev. From 2003 to 2006, he worked as a first violinist in the Shanghai Symphony Orchestra, and participated in various important performances at home and abroad with the group. After returning to China, he has been teaching at the Conservatory of Music of Shanghai Normal University since 2015. The projects he presided over were selected for the "Shanghai Cultural Development Foundation". In recent years, he has devoted himself to the establishment and promotion of new stage performance concerts for violin and quartet. His touring footprints include the National Center for the Performing Arts, Shanghai Oriental Art Center, Changsha Concert Hall, etc., and he has recorded and released the album "Chinese Music and Painting" violin and quartet Chinese works album . He successively studied under the famous viola educator Professor Shen Xidi, the American viola performer Professor Liu Nian, and the Chicago Symphony Orchestra principal viola Mr. Zhang Liguo. In 2007, he won the first place in the youth group of the first viola competition of the Shanghai Conservatory of Music, and the third place in the youth group of the Beijing National Viola Competition. In June 2017, at the invitation of Alan Gilbert, then Music Director of the New York Philharmonic Orchestra, Chen Li, as the only invited Chinese musician, went to New York to participate in the closing concert of the orchestra's season. Served as the viola of the Shanghai Polaris String Quartet.

In 2017, the string quartet album "Flow Flow" was released in New Zealand by the New Zealand record company Atoll. In 2019, he went to the United States for further study and was admitted to the Indianapolis Symphony Orchestra in the same year. Since 2021, he has been employed by the Suzhou Symphony Orchestra.

Director of Shanghai Youth Literature and Art Federation. Director of Shanghai Cello Professional Committee. He successively studied under the famous piano educator Professor Wang Yu, Professor Sheng Yiqi, and the famous cello educator Professor Lin Yingrong. In 2000, he was admitted to the Shanghai Conservatory of Music with excellent grades. He studied under the famous cellist Professor Cao Min. In the following year, he was admitted to the Asian Youth Orchestra as the principal cello. The "Shanghai New Music Troupe" is dedicated to performing excellent modernist works at home and abroad. It has performed in Europe and Hong Kong, China, and received wide acclaim.

Since 2010, he has been the chief cello part of the Shanghai Philharmonic Orchestra. In 2013, he was invited to serve as the guest principal cellist of the Munich Symphony Orchestra, and successfully performed a concert in the Golden Hall of Vienna; in 2018, he represented China as a judge of the Ginastera International Music Competition, and successfully performed a concert as the only Chinese cellist; in 2019 , was invited to Philadelphia, USA, to participate in the first Chinese New Year Concert of the Philadelphia Orchestra at the Kimmel Center for the Arts.

In 2019, he cooperated with the famous dancer Huang Doudou to perform the cello concerto "Zhuang Zhou's Dream" by the composer Zhao Jiping; in the first "Concert in Commemoration of the 250th Anniversary of Beethoven's Birth" by the Shanghai Philharmonic Orchestra in the 2020-2021 season, he and the conductor and Pianist Zhang Liang and violinist Zhang Runyu jointly performed the difficult Beethoven "Triple Concerto in C Major", which was recommended to be broadcast live by the European Broadcasting Union; in 2021, on the occasion of the 100th anniversary of the founding of the Communist Party of China, Mr. Liu Niancheng will be presented Cello Concerto "Wandering——I Walked into the Solemn Congress Site".