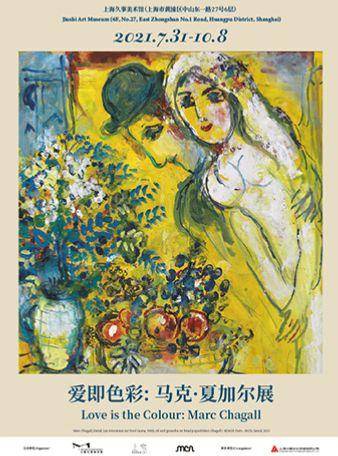 Titled Love Is the Colour: Marc Chagall, the exhibition features 154 artworks from the collection of La Comite Marc Chagall in Paris, France and runs until the end of October. Shanghai is the final leg of the exhibition's tour in China.

Aside from 27 oil paintings, watercolors and oil tempera, the exhibition also includes 127 pieces of etching and lithograph art.

"Chagall is a master of modern art who is difficult to categorize and define," says Ma Zhenzheng, the curator of the exhibition in Shanghai.

One of the most influential modernist artists of the 20th century, Chagall created "a world of seemingly irrational and illogical images where people easily get lost", Ma says.

The exhibition is arranged in six chapters, with the first featuring Chagall's childhood and home in Vitebsk. The city, now a part of Belarus, was at the time in the Russian empire, and half the population were Jewish. The ancient Yiddish culture, Jewish folklore and snow-covered Russian landscapes have repeatedly appeared in his works throughout his career.

The second chapter is focused on love, one of the most important themes in his works. Some of Chagall's most celebrated paintings show his first wife Bella, whom he considered to be the love of his life, and his second wife Vava, who accompanied him through his twilight years.

The curatorial team in Shanghai has put together the pictured La Fontaine fables in Chinese and English, alongside the lithograph series on exhibition. This has largely enriched the visiting experience and brought more fun to young audiences, says Le Mengrong, a Shanghai-based critic.

The fourth chapter features his paintings of Paris, the city that became his dreamland and where he was exposed to diverse forms of modern art before establishing his own style.

The fifth chapter features a series of illustrations for the Bible, while the final chapter features paintings of flowers, the bright tones reflecting the artist's optimism and romantic passion for life.

Chagall was born in a Jewish community in 1887. When he was 20, he left for Paris where he developed a unique and peculiar style combining dreamlike, highly personal imagery with influences of the fauvism and cubism popular at that time.

During his life, he experienced war, homelessness and the death of loved ones. But his artworks are nevertheless filled with rich colors and imagination that reveal the lightness and transparency of life, Ma says.