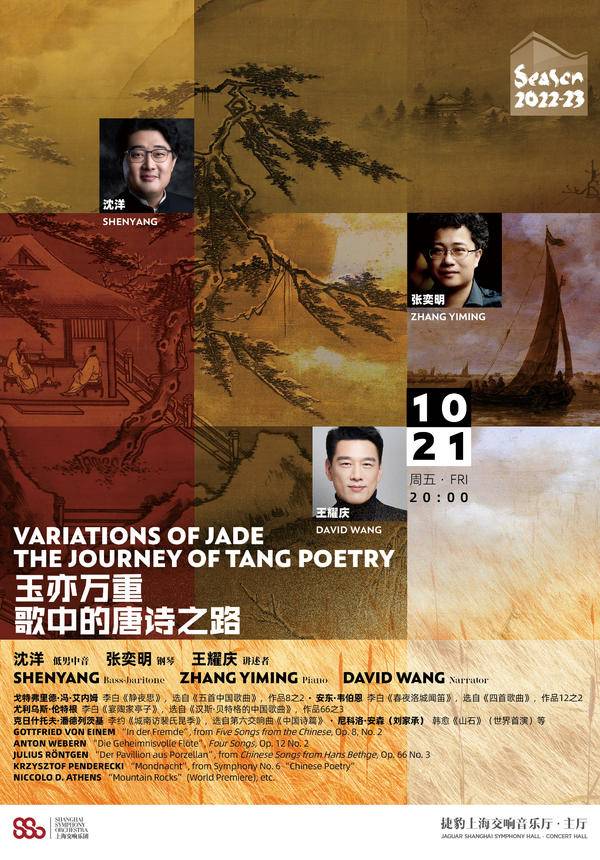 When talking about the lyricizing poetry of Tang and Song dynasty in classical music, people often remind of Mahler's masterpiece Das Lied von der Erde, which is selected from the poetry collection Die Chinesisches Flöte by the German poet Hans Bethge. In fact, there are also many works scattered from different composers. According to incomplete statistics, there are more than 100 songs composed with the inspirations from Chinese poetry in classical music history. In this concert, famous actor David Wang will be involved with classical music as Narrator after Peer Gynt, his solo show with Shanghai Symphony Orchestra. Together with the famous bass-baritone Shen Yang and pianist Zhang Yiming, they will bring the Journey of Tang Poetry with lieders as a tribute to brilliant poetry culutre.

The styles of the works in this concert are varied. For example, Hans Gál was a famous composer from Austria, who occupied a pivotal position in the Vienna music community in the twentieth century; John Alden Carpenter was an American composer, whose works were born with American optimism and humor; Sir Arthur Bliss was an avant-garde British composer but holding the British traditions... In addition, works of Chinese composers will be presented at the end of the performance, demonstrating the contrast and blend between Eastern and Western styles. The diverse styles of Chinese and international musicians reveal the plasticity of Tang poetry as a lyric and fully reflect the simple fact, "Music has no boundaries".