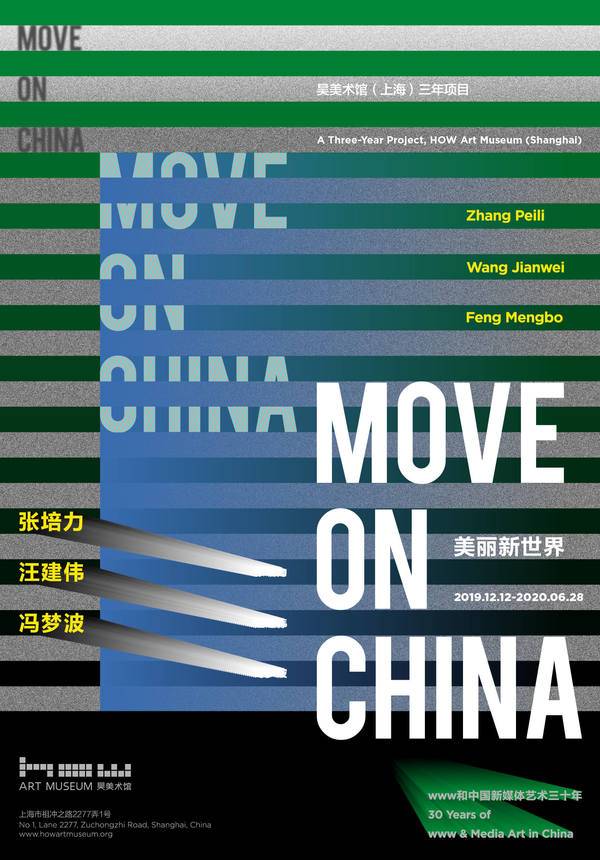 HOW Art Museum is proud to announce that it will host the first annual “30 Years of www & New Media Art in China”. The event marks the first year of a three-year project. The large-scale transdisciplinary forum and three-person collaborative exhibition “Move on China 2019” will include Feng Mengbo, Wang Jianwei, and Zhang Peili. The event will be held at the HOW Art Museum (Shanghai) on December 12th 2019.

Thirty years after the birth of the World Wide Web and the “China／Avant-Garde” exhibition, video and digital art have increasingly become a force that cannot be ignored in today's public cultural spaces. The HOW Art Museum hopes to revisit the important nodes of Chinese new media art over the past three decades through these three exhibitions, large-scale forums, and monographic publications. The museum will join forces with artists, institutions, and scholars from various fields, to transmit and transmute civilization on academic and ideological levels between different disciplines and fields by means of on-site works, writing texts and debating topics.

Issues to be discussed will include but are not limited to: the transition and distinction between the central and the marginal, as well as the relationship between technology, the future, and community. The discussion hopes to give a philosophical exegesis of media and events, which function as the basis to grasp and define the essence of contemporary life while providing the context and direction of thought and culture. 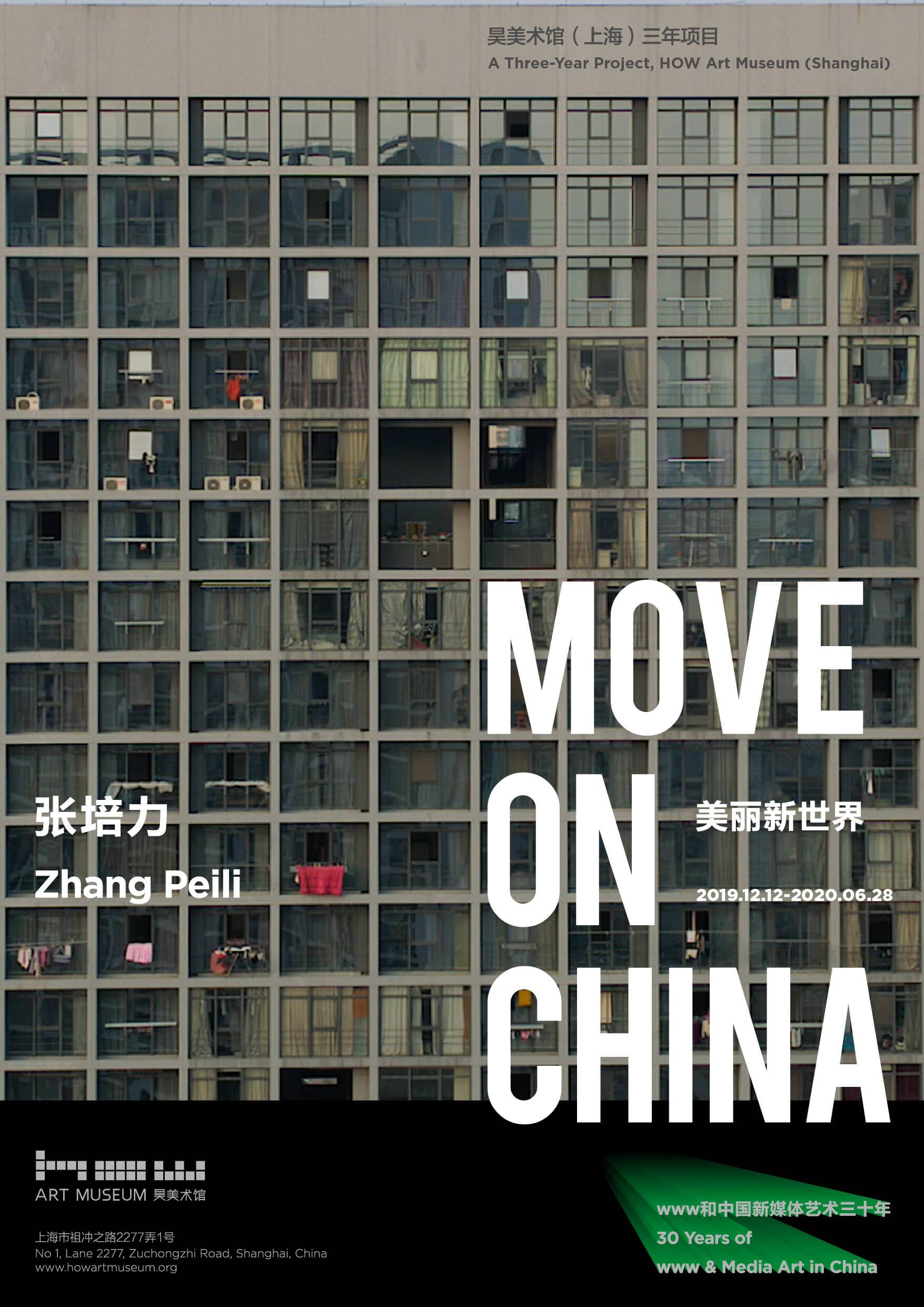 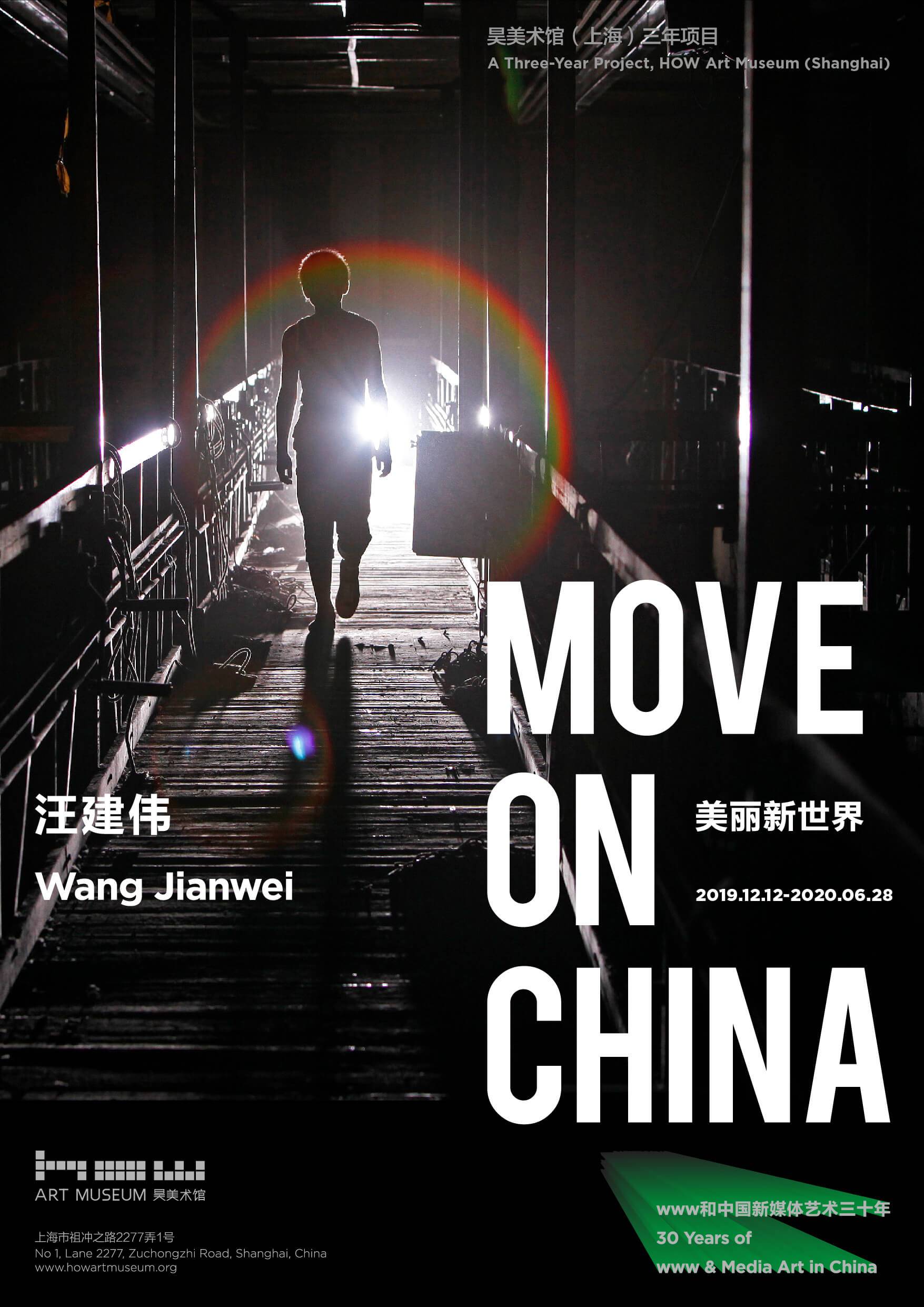 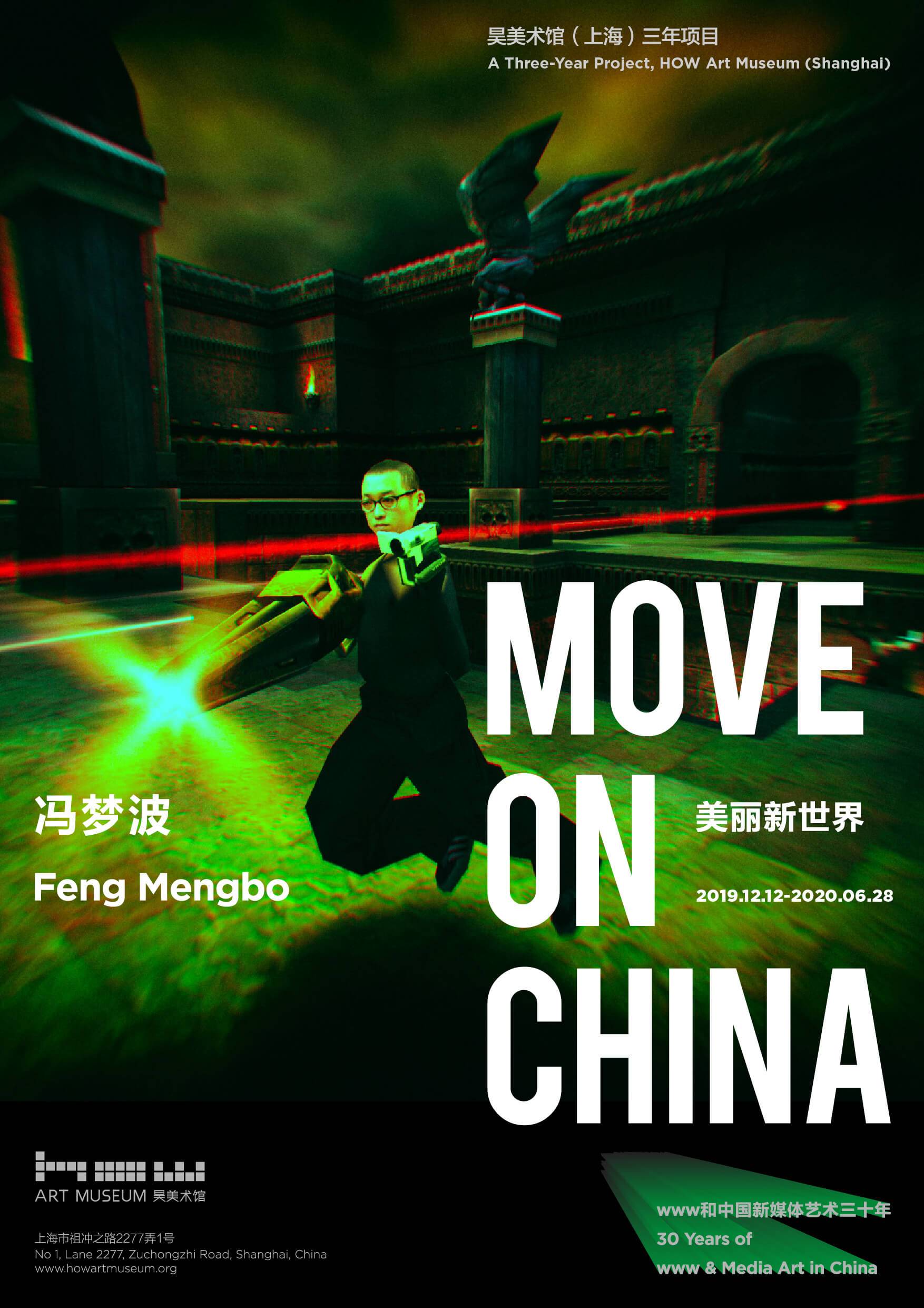 Feng Mengbo, Wang Jianwei, and Zhang Peili have made outstanding contributions to video art and digital media, endowing new forms of media with a kind of reasoning that is intrinsically linked to the artists themselves. All while bearing in mind the social transformation and constant changes of the times. Since the process of Chinese contemporary art gaining recognition began, their work has retained its prominent exploratory and Avant grade nature. Feng Mengbo has injected fresh blood into contemporary art by intersecting technology and aesthetics in the form of electronic games, interactive installations, video, and music performances. At the same time, Feng Mengbo intertwines the work with alternative takes toward geography, the times and identity. Through a series of videos, theatre performances, installations, and sculptures, Wang Jianwei shifts semantics and the centre, subverting and reconstructing subjectivity which is passed on to the audience in the form of hyperlinks. Zhang Peili presents us with the control and transmission of information and discourse, the dislocation of public and private space, and the distortion of what it means to see and be seen. It's within such a backdrop that he reveals in a hyperrealistic fashion the fate of the individual over a long span of time defined in terms of power. With the relatively mature level in development that technology and media have reached today, the pioneering and experimental significance of their work when it was accomplished has yet to be fully revealed. As artists who have a deep awareness of media and concepts, their innovative engagements will continue to have a more and more profound impact in the future.

The second and third years’ of the project “30 Years of Chinese New Media Art”, including the corresponding exhibitions and discussions will also be held at the HOW Art Museum during the fall of 2020 and 2021. The project seeks to explore possible trajectories and dispositions manifested under this theme from multiple perspectives. The project will eventually publish monographs based on three exhibitions and the three forums which will be printed in both English and Chinese in 2022. 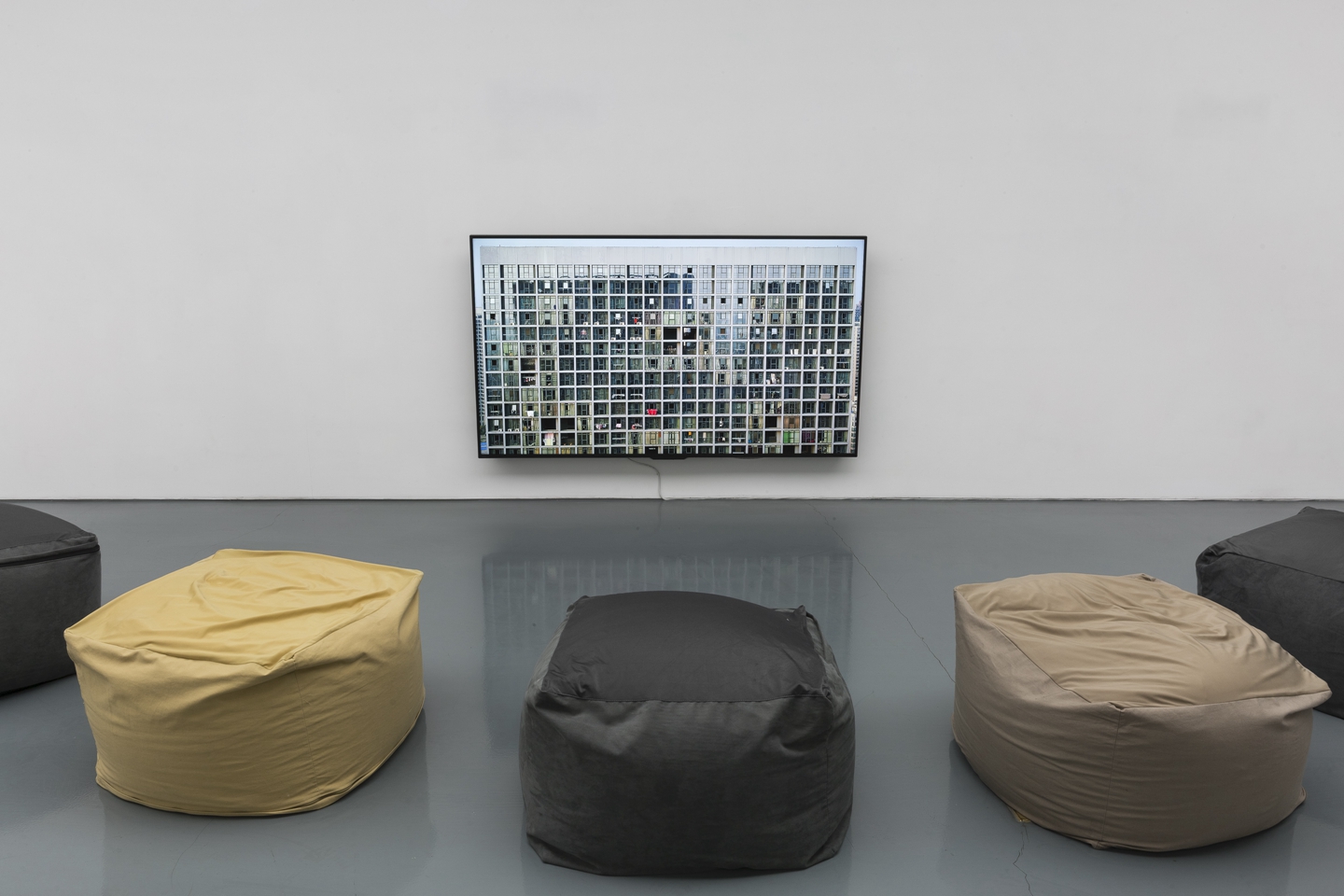 HOW Art Museum is honoured to announce that the continuous project Me & Beuys will open on the 2nd-floor exhibition hall of the HOW Art Museum (Shanghai) on December 12th, 2019. This project will invite an artist every four months to engage in a dialogue with Beuys by exhibiting their art in the Beuys exhibition area forming an "exhibition within an exhibition". The project is presided over by the curator Du Xiyun.

On January 23, 1986, Joseph Beuys, the artist who stirred up so much debate during the era of print media, passed in Germany.

At the same time, the China Mainland was undergoing a stage where all of her people were eagerly seeking cultural enlightenment. In the art world, the “New Wave Art movement of 85" was on the rise, and Robert Rauschenberg's exhibition at the National Art Museum of China had just opened two months before, and the avant-guard youth were greatly inspired by the works that they saw and with the concept that ready-mades could become art in their own right.

But also at that time, not many people knew who Joseph Beuys was or about the possibility and methodology behind art breaking from its dependence on visual effects. Since the early 1990s, more and more Chinese artists have come to know and understand Beuys, accepting him as the cornerstone of contemporary art while consciously taking into account what he advocated as the starting point of his practice.

Beuys’s unconventional actions and ideas like “everyone is an artist” and “Social Sculpture” played a very positive and significant role in the devastated Post-WWII Europe: they inspired everyone's passion and creativity, transforming the society through concrete actions. It was these ideas and actions that had a huge impact on Chinese artists.

Beuys’s “using the name and method of art to engage with society directly” was quite easy for Chinese artists to understand and pick up. Especially when Beuys said “If I want to give a new anthropological position to the man, I must also give a new position to all that concerns him, link him downwards with animals, plants and nature, as well as upwards, with angels or spirits […]. In my actions, I have always exemplified art=man”. Such prophetic words are more meaningful in the contemporary era with its environmental crisis(s), clash(es) of civilizations, accelerated development in the fields of artificial intelligence and biotechnology.

The grand exhibition Lettres du Voyant: Joseph Beuys x Nam June Paik which took place in 2018 at HOW Art Museum, caught the attention of the public and led to widespread discussion. After the exhibition, hundreds of works by Joseph Beuys (sculptures, paintings, installations, images, documents, etc.) from the HOW Art Museum Collection were put on long-term display specifically for the public and scholars to observe and study.

It is on this basis that the HOW Art Museum presents the continuous project Me and Beuys. Every four months, the project invites an artist to engage in a dialogue with the collection of Beuys works in the form of an "exhibition within an exhibition" in the Beuys exhibition area. The project is presided over by the curator, Du Xiyun who invites artists who have taken part in sustained "social intervention" to touch on the rich relationship with Beuys through the process of realizing specific projects. The aim is to reactivate each other's cultural potential by seeking common ground while putting aside differences.

The first exhibition of Me & Beuys will be held on the 2nd floor of the HOW Art Museum (Shanghai) on December 12th, 2019. The exhibition invites artist Zhou Xiaohu to engage in dialogue with Beuys with his work Detective Project-To Chase One's Tail Training. At the same time, this work was donated by the artist to the HOW Art Museum collection, for that, the Museum would like to hereby express its sincere gratitude to Mr. Zhou Xiaohu.

Zhou began using computers as an artistic tool in 1998. As one of China’s most well-known most prolific contemporary artists, he specializes in inducing confusion and bafflement, making viewers question the evidence of their senses and their assumptions about the so-called ‘facts’. He has since experimented with stop-frame video animation, video installation and computer-gaming software, whereby the interlaying of images between moving pictures and real objects has become his signature style. Working across performance, photography, installation, sculpture, video, and animation, Zhou’s practice reflects the documentation of history in a digital age.

The work of Zhou Xiaohu has been exhibited at MoMA, New York, USA; Tate Liverpool; Kunst Museum Bern, Switzerland; and the International Center of Photography, New York, USA and the Museum Moderner Kunst Stiftung Ludwig, Wien, Austria. He has participated Shanghai Biennale; Seville International Art Biennale in 2004; Asia Pacific Triennial of Contemporary Art, Brisbane, Australia in 2006; The Real Thing, Tate Liverpool in 2007; Not Soul For Sale, Tate Modern Turbine Hall in 2010; and the 8th Gwangju Biennial, Gwangju Art Museum, Korea in 2010. Zhou Xiaohu was awarded the CCAA Award in 2002 and 2006; and won the gold award in the experimental video category in the 36th Houston international film festival; and 2014 has been awarded a DAAD Artists-in-Berlin Program. 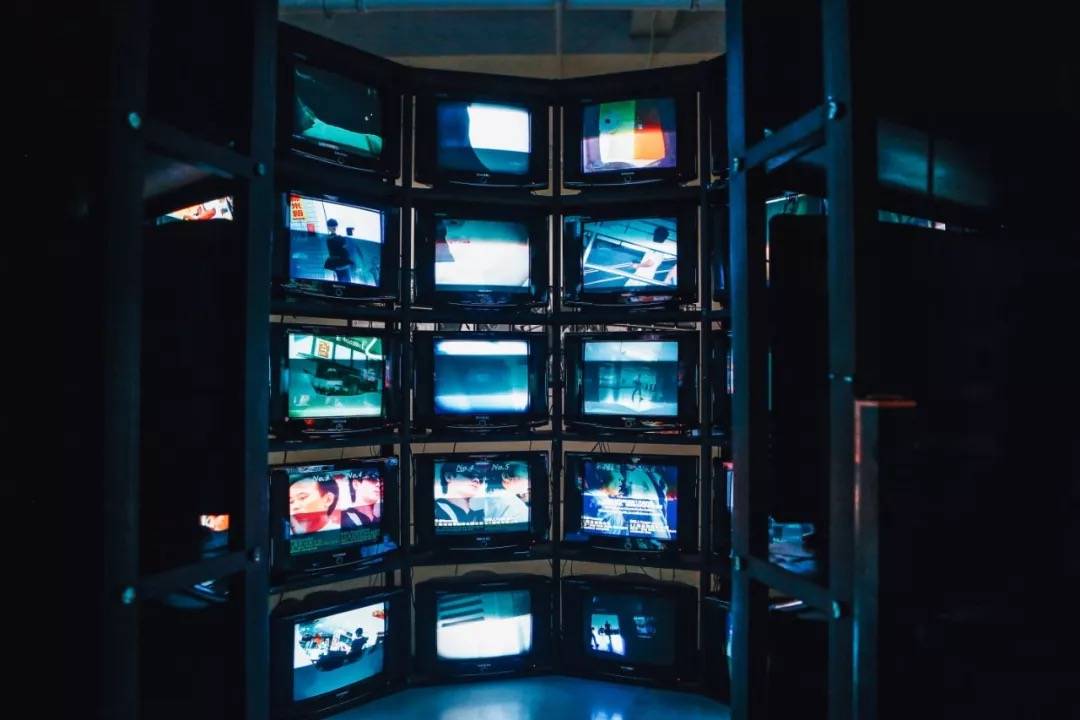 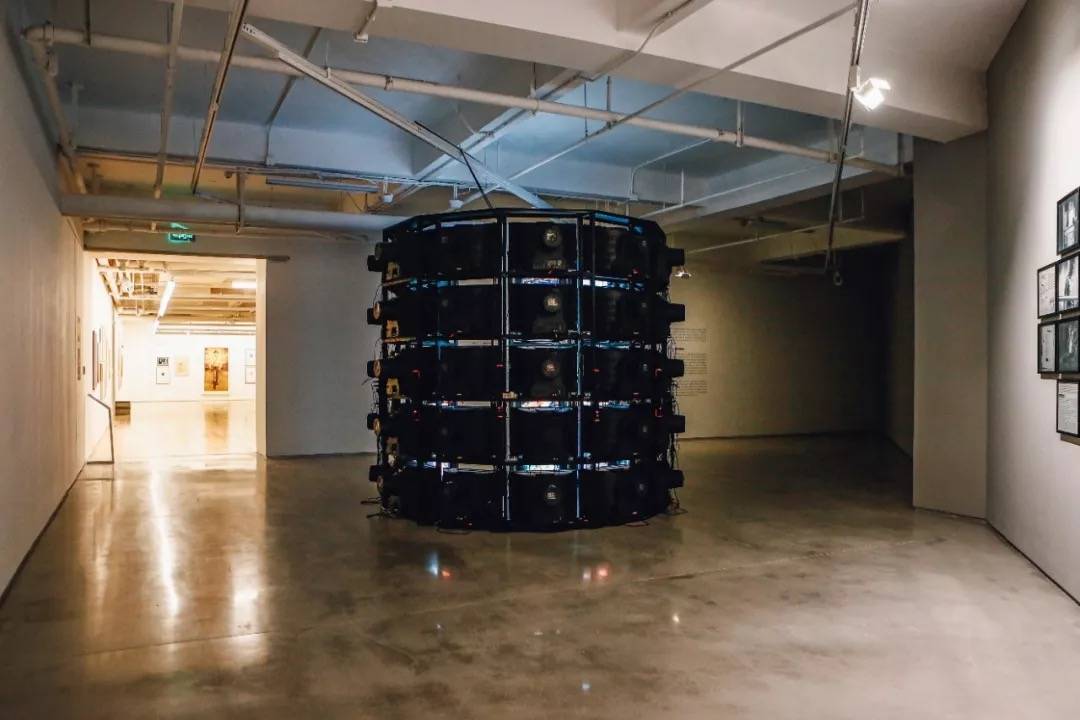 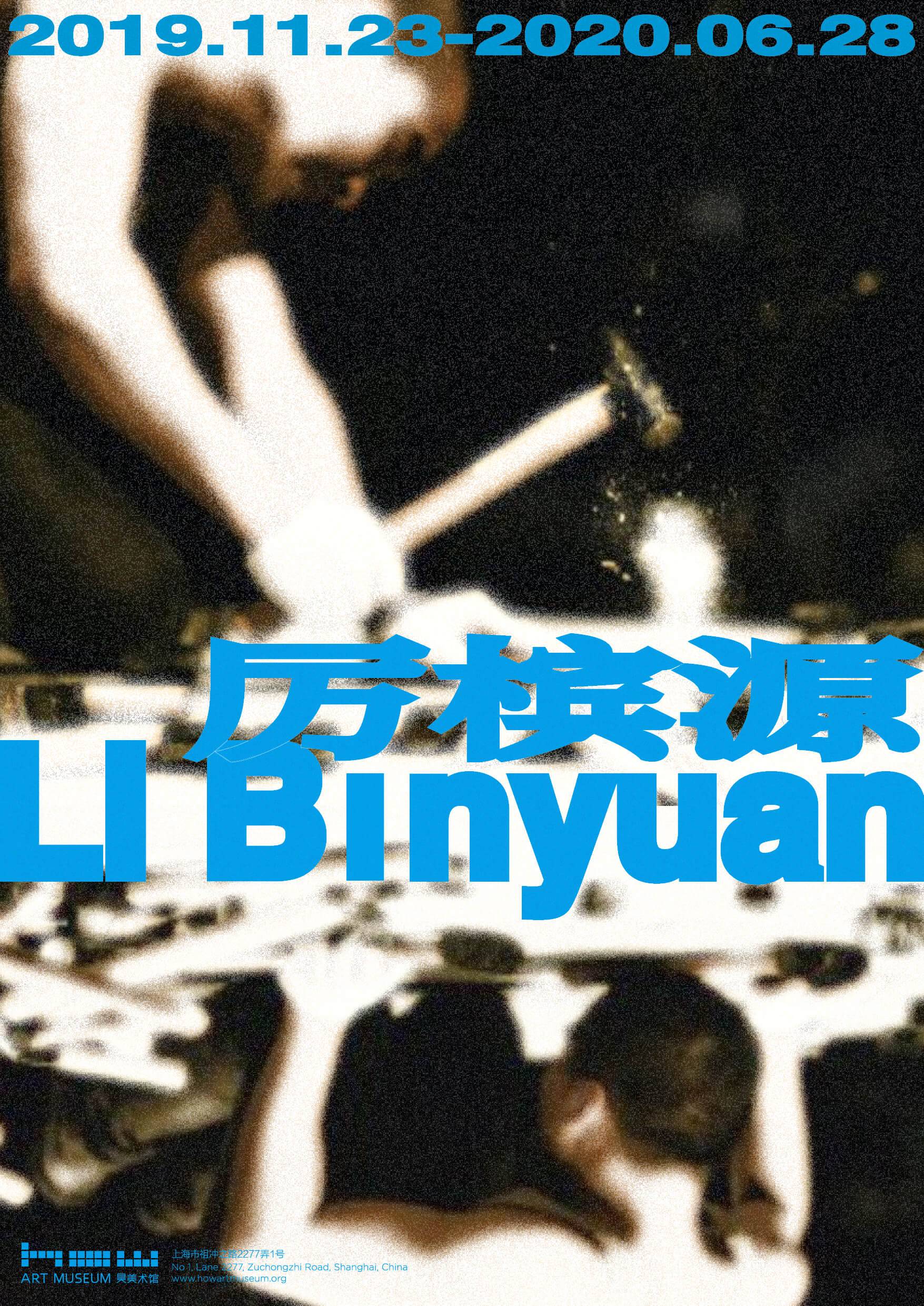 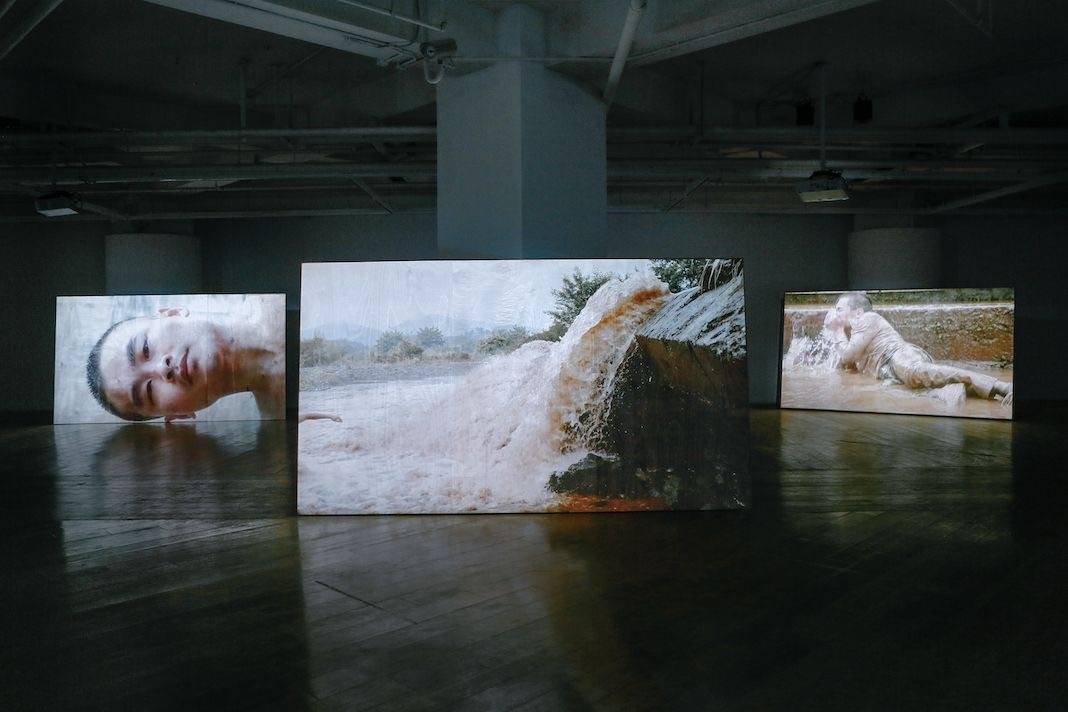 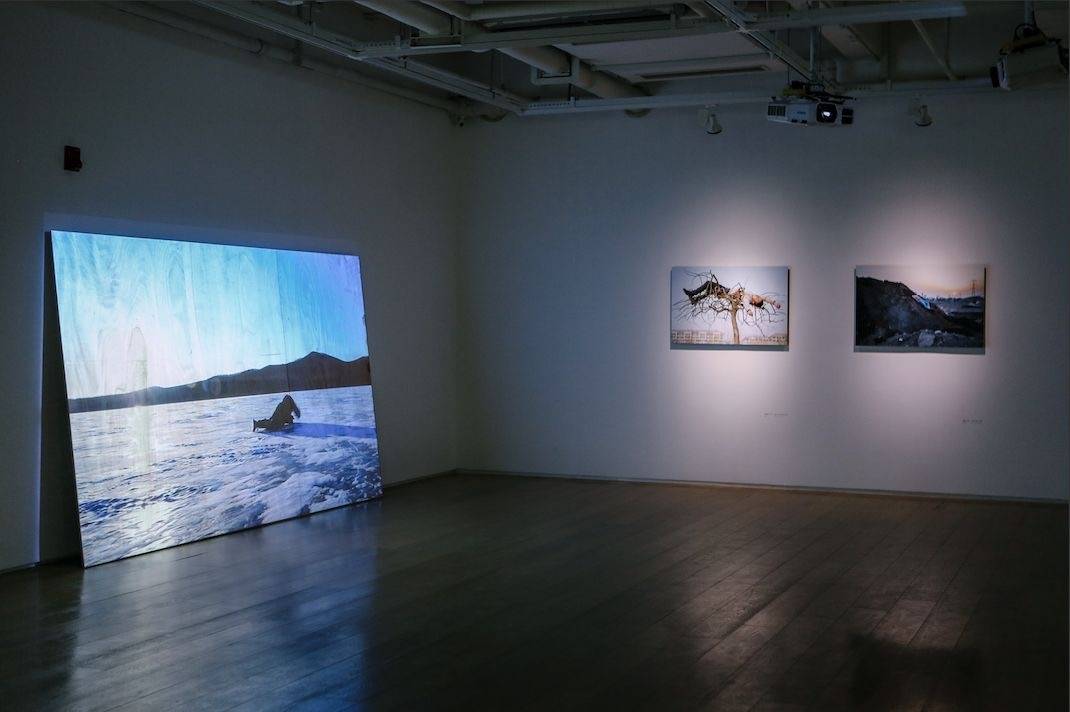 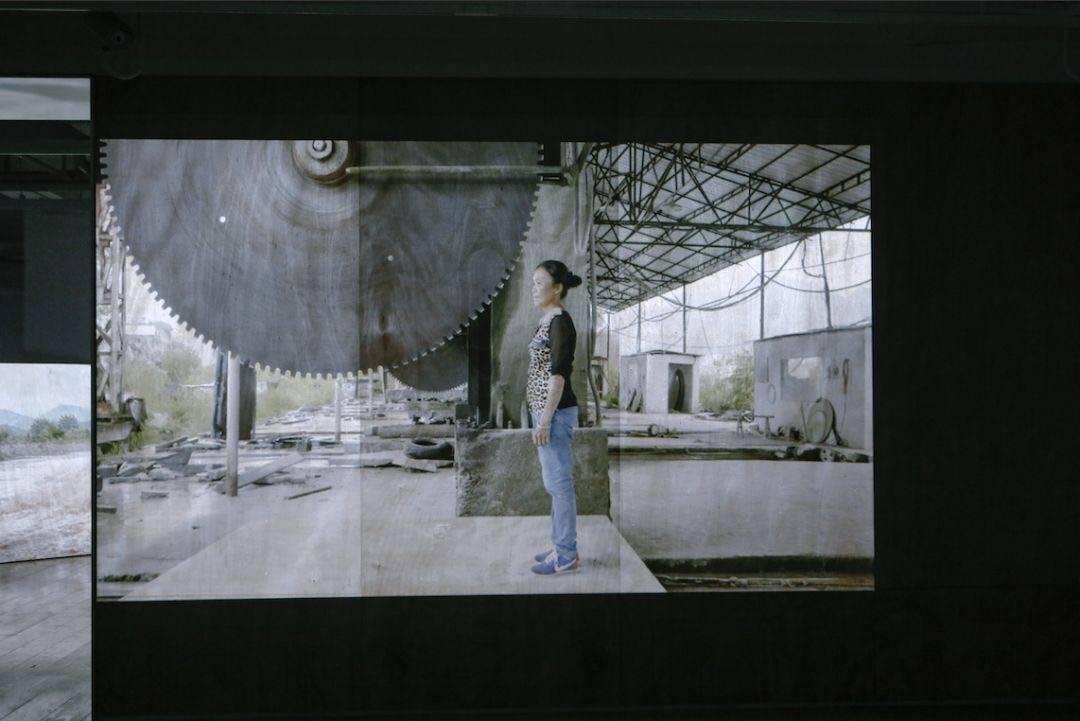 It's Free-flowing at The Ritz Bar

The Starry Gallery of Shanghai