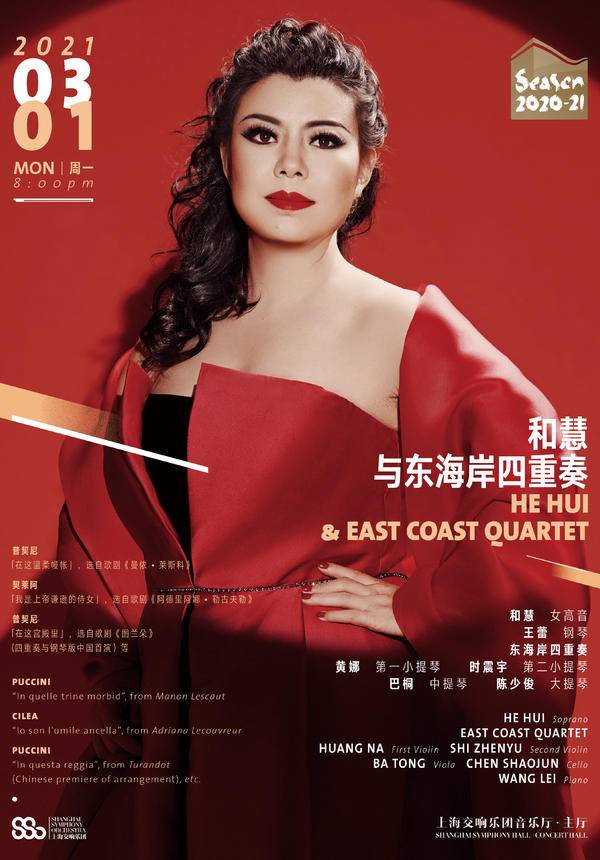 (All pieces of this concert, except for the pieces marked with **, are transcribed by Luca Pozza. All transcriptions are commissioned by Shanghai Symphony Orchestra.) Chinese soprano Hui He debut as Aida in Shanghai grande theater in 1998, she burst onto the international music scene in 2002 with her performance as the title role in Puccini’s Tosca at teatro Regio in Parma. And her Madama Butterfly debut in national opera house in Bordeaux. She has become not only one of the most famous interpreters of Cio-Cio San to be heard today, but also one of the most acclaimed interpreters of the titles roles in Aida and Tosca.

Since her breakout performance in 2002, Ms. He has sung at most of the world’s leading theaters, including the Metropolitan Opera, Vienna State Opera, Teatro alla Scala in Milan, Deutsche Oper Berlin, Opera Bastill in Paris, Bavarian State Opera in Munich, Gran Teatre del Liceu in Barcelona, lirico opera in Chicago and Arena di Verona... Engagements for the 2016/17 season include Amelia in Un ballo in maschera at the Teatro dell’Opera di Roma and Zürich Opera, the title role in Tosca at the Deutsche Oper Berlin and Festival Puccini, and the title role in Madama Butterfly at the Teatro Real de Madrid, Deutsche Oper Berlin, Teatro Massimo di Palermo, Den Norske Opera, and Dallas Opera. In future seasons, Ms. He will make her role and house debut as Elvira in Ernani with the Opéra de Marseille, return to the Metropolitan Opera as Madama Butterfly and sing the title role in La Gioconda at the Deutsche Oper Berlin.

Her engagements for the 2011/12 season included the title role in Tosca at Oper Frankfurt and Opera di Firenze, Aida at Lyric Opera of Chicago and Arena di Verona, and Madama Butterfly at Theatre du Capitole in Toulouse. In the 2010/11 season, Ms. He sang Aida at the 2011 Maggio Musicale Fiorentino production under Zubin Mehta, in a new production at Oper Köln, in Valencia, Munich, and with the New Israeli Opera at Masada.

Born in China’s Shaanxi,Hui He completed her musical and vocal studies in China and Italy. In 2000, she won Second Prize at Placido Domingo’s International Operalia Competition in Los Angeles, after which she was invited by Maestro Domingo to sing a concert with him in Shanghai. In 2002 Ms. He won First Prize at the Voci Verdiane in Bussetto, where she was especially praised by the legendary Turkish soprano, Leyla Gencer. She subsequently made her Italian stage debut in February of 2002 as Tosca at the Teatro Regio in Parma.

This debut was followed by Alzira in Parma, Un ballo in maschera in Verona and Bolzano, and Aida in Florence, Naples, Rome, Busetto, Lucca, Piacenza and Catanzaro. Ms. He debuted at the Vienna State Opera as Lina in Verdi’s Stiffelio and at the Arena di Verona as Liu in Turandot. In 2006, she made two very important debuts: at the Teatro alla Scala in Milano in Tosca, conducted by Lorin Maazel, and at Opéra-Bastille in Paris in Madama Butterfly. In 2007, Ms. He debuted in Munich as Tosca, and it was in this role that she made her New York Philharmonic debut in concert performances under Lorin Maazel in 2009. This was followed by her debut at the Metropolitan Opera in 2010 as Aida. Hui He has performed in some of the most prestigious opera houses in the world and has appeared on stage along with some of the most renowned conductors (Lorin Maazel, Zubin Mehta, Daniel Oren, Fabio Luisi, Marco Armilliato, Andris Nelsons, Gustavo Dudamel).

Hui He has received many prestigious awards, such as the Prize “Sergio Ravazzin” in 2005 awarded for the best debut in the Arena by the association “Le Voci” of Verona”, ; the “Juliet” prize awarded by the “Giuseppe Verdi” association in Verona for her interpretation of Aida in 2007; the Kaleidos prize awarded by the Kaleidos association of Palermo in 2009; in 2010 she was awarded the Oscar of the Opera by the Arena di Verona Foundation ; and in 2011 she is awarded the “Luigi Illica” prize by the City of Castell’Arquato; and in 2013 she receives the “Verona Lirica” award assigned by the association ,“2015 Marcella Pobbe award “, also 2015 she won “World Chinese Awards”.

In 2018, Hui He performed the heroine of Ernani at Marseille Opera House, La Gioconda at Deutsche Oper Berlin, Tosca at Puccini Opera Festival, Aida at the renowned Arena di Verona Opera Festival in Italy and also at the National Center of Performing Arts in China, Madama Butterfly in Zurich Opera House, etc., and continued to be active on stage worldwide.

In 2019, Hui He performed La Giocondo at the bruxelles opera la monnaie, Adriana Lecouvreur at the Verona Philharmonic Theatre and the renowned Salzburg Music Festival. To celebrate playing the heroine at the Arena di Verona Opera Festival in Italy for 15 consecutive years, she performed Tosca and Aida. And also the debut of Turandot at the Bologna Municipal Opera House and Dubai Opera House, the debut of La Boheme at the Puccini Opera Festival in Italy. At the end of 2019, Hui He performed 10 consecutive Madama Butterfly at the Metropolitan Opera House in New York, as well as the debut of Turandot in China at Shanghai Grand Theatre.

* Programme is subject to change