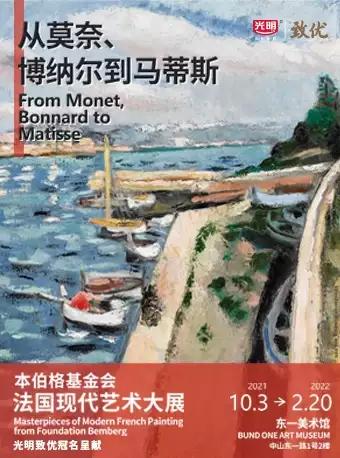 ⚠️ Please book at least 1 working day in advance.
👉 E-ticket exchange for paper ticket entry
👉 Each Attendee needs a Ticket
👉 Free for Children under 1.2m (one adult with one child)
👉 No cancellation From Monet to Bonnard to Matisse

The Bund One Art Museum is proud to present another world-shaking exhibition, "From Monet, Bonnard to Matisse: The Great Exhibition of French Modern Art", which follows on from the popular "Monet and the Impressionist Masters" exhibition in Shanghai. Even more anticipated is the debut of the authentic works of Matisse, the founder of Fauvism, who has made his debut in recent years, making them the perfect choice for all of us who want to learn about colour. Let's experience how colour wizards use colour to evoke art!

In this exhibition visitors will see 80 authentic paintings from the trajectory of French modern painting from the end of the 19th century to the beginning of the 20th century, from Impressionism and Pointillism, to Symbolism, Fauvism and finally Cubism. Henri Matisse, Pierre Bonnard, Paul Sinek, Claude Monet, Berthe Morisot, Camille Pissarro, Paul Gauguin, Pablo Picasso and other familiar artists who are usually only seen in art history books. It is also worth mentioning a very important painter in this exhibition, who is an indispensable source of artistic spirit for our understanding of modern art history, who recognised the infinite possibilities of colour from Monet's idea of colour and used a new artistic concept to build a solid bridge between the late Impressionist period and the beginning of Fauvism. His paintings continued to be a major influence on later artists such as Henri Matisse of Fauvism and Picasso of Cubism, and he was the great colour wizard of the 20th century, Pierre Bonnard, one of the founders of the Nabis school. The name les Nabis is derived from the Arabic word nabi, which also means 'prophet or seer' in Hebrew. This painting by Bonnard, Le Canet, is from the mature phase of his style. Located near the place where Bonnard lived for 22 years and his studio, the painting contains both the contours of the real world and the feelings of the subjective emotional world. It is this depiction of the subjective emotional world as felt that gives us a taste of the infinite possibilities in art and propelled his close friend Matisse from the Fauvists to explore the abstract realm of colour. As you view his work, you are drawn into the contrast, the musicality, the mystery of the colours in the picture, the vibrations of colour that radiate in your eyes. The rest of your senses are gradually opened up, your ears seem to be filled with the various sounds in the paintings, your nose smells a sense of déjà vu, you can feel the texture of the table tops, the texture of the fabrics. Such a feeling can only be experienced when you let your eyes see the real thing. He continued to study and think about the use of colour, inspired by Gauguin, Cézanne, Japanese art and especially his friend Matisse, who was hailed by Picasso as one of the great painters of the 20th century, and together they explored the ultimate expression of colour, like the top martial artists of the Golden Age, pushing the elements of space, light and composition in colour to a level that was unparalleled, enough to make them They have taken the elements of space, light and composition in colour to an unparalleled level, enough for them to stand in the history of art, where artists have gathered. Antibes is a famous French resort, and the style of this work is that of Matisse before he was about to be awakened by the wild colours. At this time Matisse's paintings have slightly subtle colour blocks and wheels, although the bold brushwork is enough to show the expressionist tendencies of early Matisse's quest for emotional expression. This painting is an important work for understanding the evolution of Matisse's artistic style. This painting was created near the end of Picasso's most illustrious life. The impressions left by the different periods of his artistic life are rubbed into this painting, which shows two people who were friends of Picasso in his later years, whose personalities are revealed by Picasso's witty lines in a light-hearted and humorous atmosphere. This is one of Gauguin's rare late-middle-period portraits, with a maturing style and gradually brightening colours. As the spiritual leader of Bonnard, Gauguin always insisted on the careful organisation of his subjects according to his own intuition when creating his art. We can see in this head of a young peasant that Gauguin was at this time pursuing a distinctive decorative character, with a simple and unpretentious image, a flat colouring of the area, and a simplicity of form and spirit. Outside of the Museum

The exhibits come from the art collection of the Georges Bemberg Foundation in France, which is now housed in the Renaissance Museum in Toulouse, southern France. Bemberg (1915-2011) was a writer and pianist, born in Argentina and raised in Paris, whose collection has rarely been exhibited elsewhere. More than 60 paintings from the exhibition are currently on display at the Museum of Fine Arts, Houston, USA, and will be shipped to Shanghai after the exhibition closes at the end of September. Another ten or so will be shipped directly from France to Shanghai.

Notice to visitors:
1. Please do not touch or copy the exhibits, and do not disturb others by making noise, chasing or jostling in the venue.
2. To ensure personal hygiene and safety, please wear a mask and maintain a safe social distance.
3. Please do not eat or drink in the exhibition halls or outside the designated areas. Drunken people are not allowed to enter the exhibition halls and smoking is prohibited throughout the halls.
4. Please do not use professional filming equipment such as tripods, selfie sticks and flashes for filming without permission.
5. Please do not conduct any live webcasting in the exhibition hall without permission, and do not engage in any commercial filming activities.
6. Shoulder bags, trolley bags, luggage with a diameter greater than 40cm, long-handled rain gear, baby strollers, etc. must be stored according to regulations, and pets are not allowed.
7. Please do not bring flammable, explosive, fragile or polluting items or items with special irritating odours into the venue. Please cooperate with security checks in case of special circumstances.
8. Pre-school children should be accompanied by their parents, and senior citizens and those with mobility problems must be accompanied by a healthy adult.
9. Please co-operate with the staff if you are in a group of more than 10 people. The museum reserves the right to dissuade you from visiting the museum if you violate the site management regulations.
10. Please cooperate with the museum as we will restrict the flow of visitors during peak periods.