Shining dance stars Xie Xin and Li Xing
Break down the character of “Human,” look in to human bodies
Research, discover, connect and rebuild from the essence
Explore the components of “human” through its body
Dig into humanity, emotions, desire and softness
Praised by Finland International Art Festival Director as “seeing the future that is not found by European contemporary dance”
Douban 8.4, a classic “From IN”
Use the body to write, use dancing to return to human nature 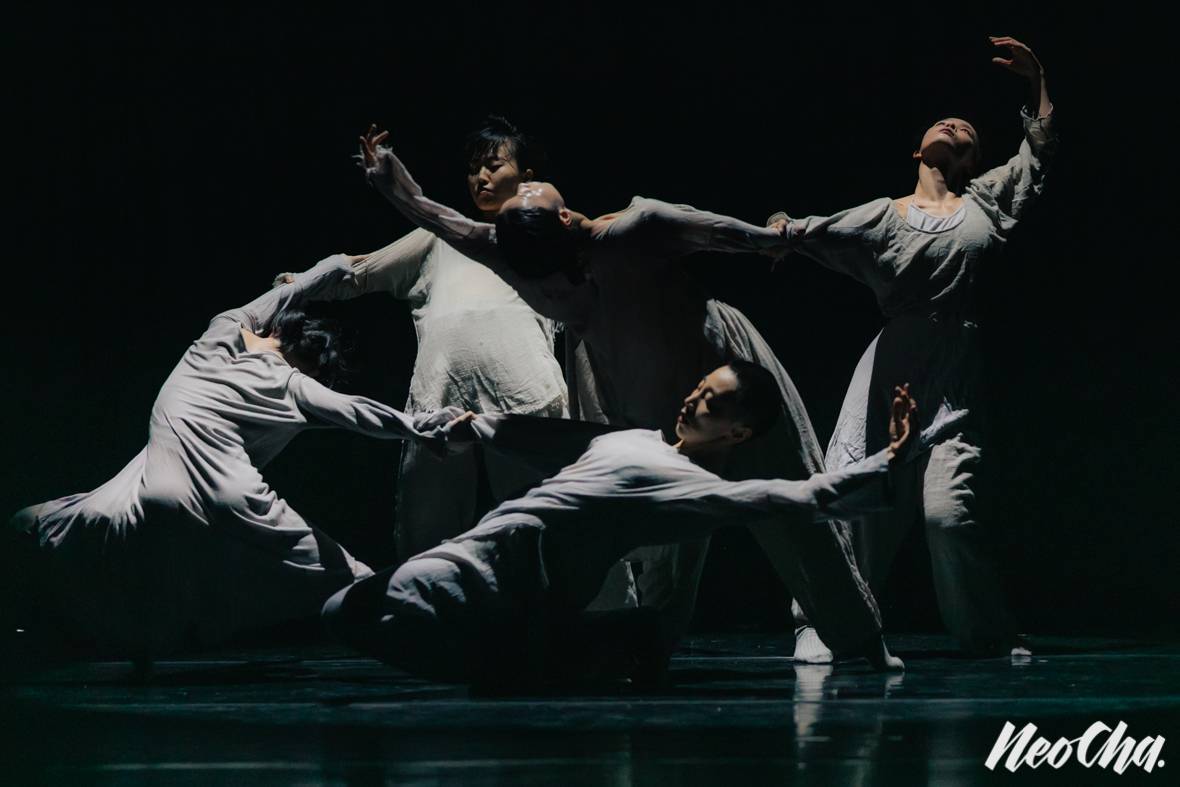 Memories are created between different human beings. We are connected by a certain crossover point in time and space. Otherwise we’ll just be irrelevant strokes in the same space.
“From IN” breaks down the shape of “human” and deconstruct the “human” from different levels. Its Chinese character is divided in to a “pie” stroke and a “na” stroke. Through the character we can see the human body itself and study the logic behind its movements. Digging deeper, we can find the components of human, the emotions and memories we have and the sentimental feelings that make us human beings. And deeper we can see heart, the place where all the feelings and blood start. The heart is also a starting point of human being, the cross point of different people, the connecting point of emotions, the clash point of bodies. It’s a place we can rest ourselves. What’s behind that? Starting from “me,” I can see loneliness from this starting point, this connecting point and this cross point… 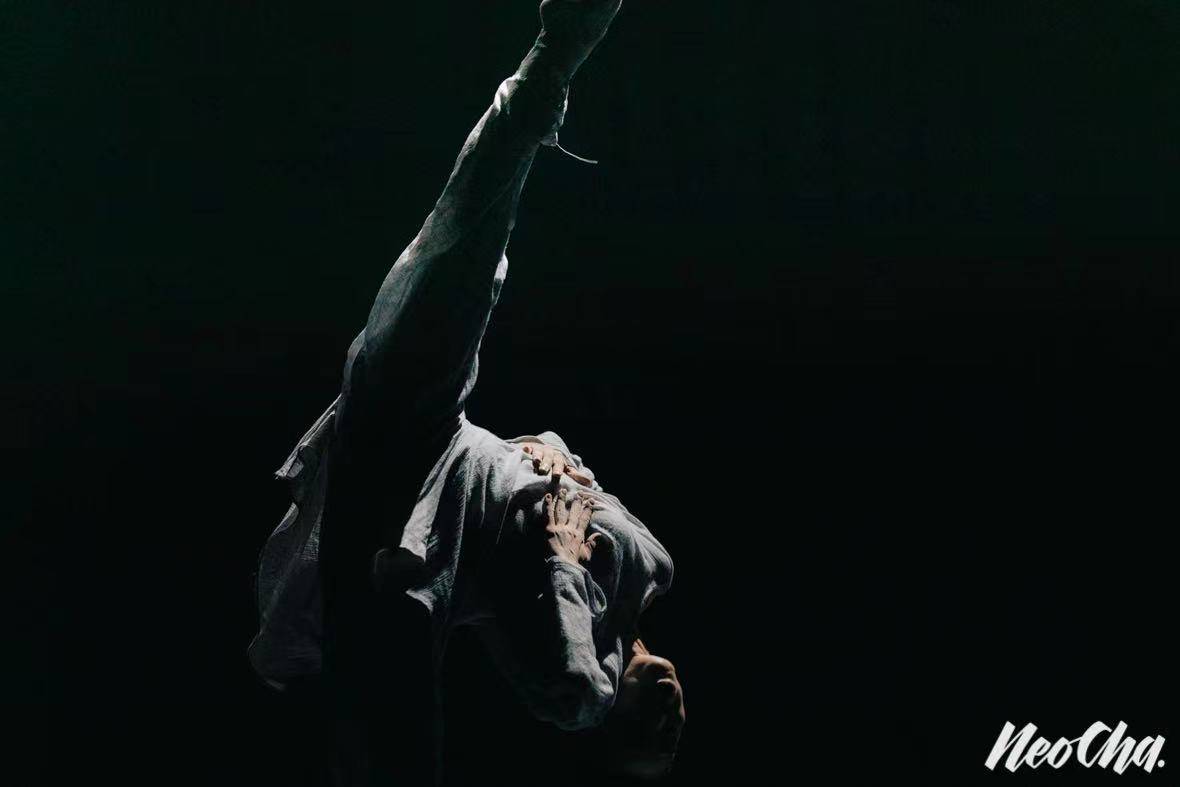 The performance of From IN is very changeable and the dance language is very unique. Therefore, different body parts can be developed completely and it seems that every muscle and joint can dance. In particular, the twisting of bending and looking up to the sky have much stronger visual impact.
(Xinmin Evening News) From IN shows free-style images of writing Chinese calligraphy and integrates the co-existing spiritual emotions of everything on earth. With the supporting point of connection, Chinese character “Ren” (human being) is formed by a left-falling stroke and a right-falling stroke. It makes people joyful and satisfied.
(Reviewed by Nai Gu, China Youth Daily) 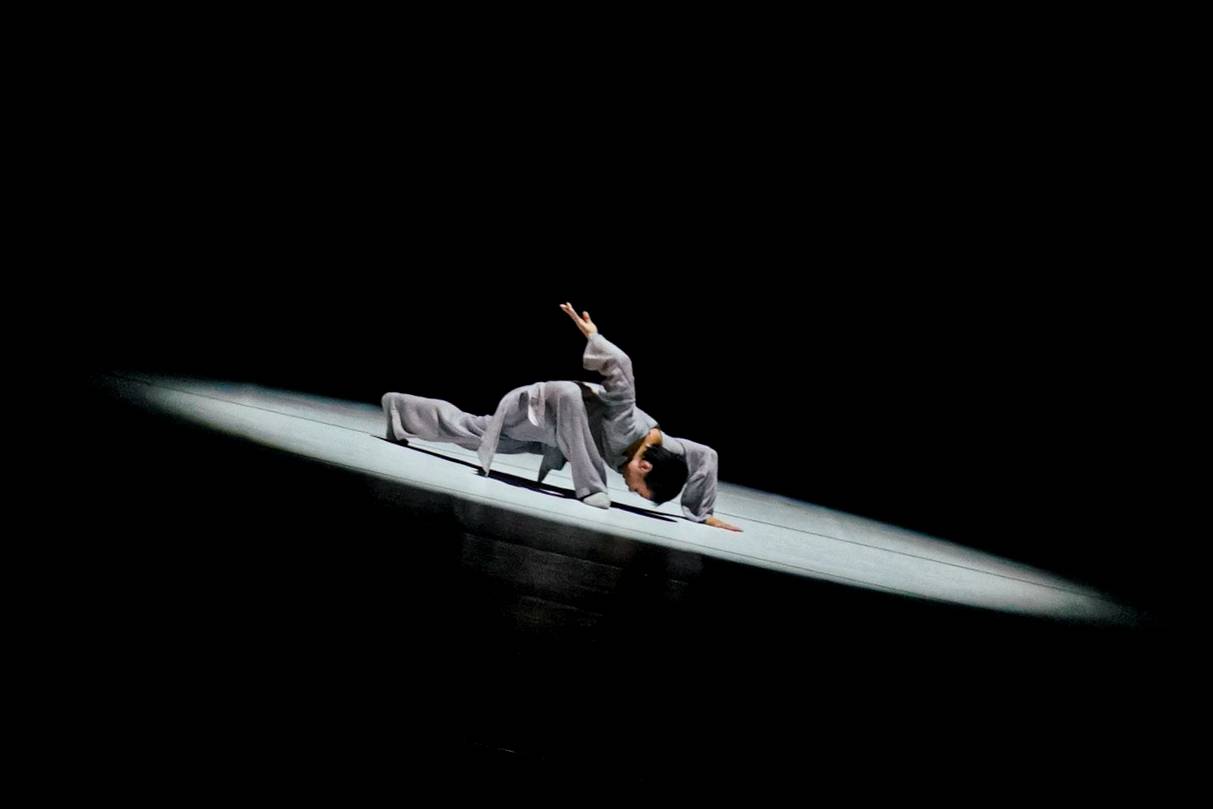 From IN adopts the technique of “fade-over”in movies. Through smoke effect on the stage, the dancer’s appearance and disappearance are just like dreams, which make people feel lost and dumbfounded. Therefore, it increases visual effect as well as dreamlike poetic effect. Then, it seems to be valuable for From IN to pursue and explore the initial intention of art. (Dance reviewed by Zhou Ziqiang, Jiangxi Daily) 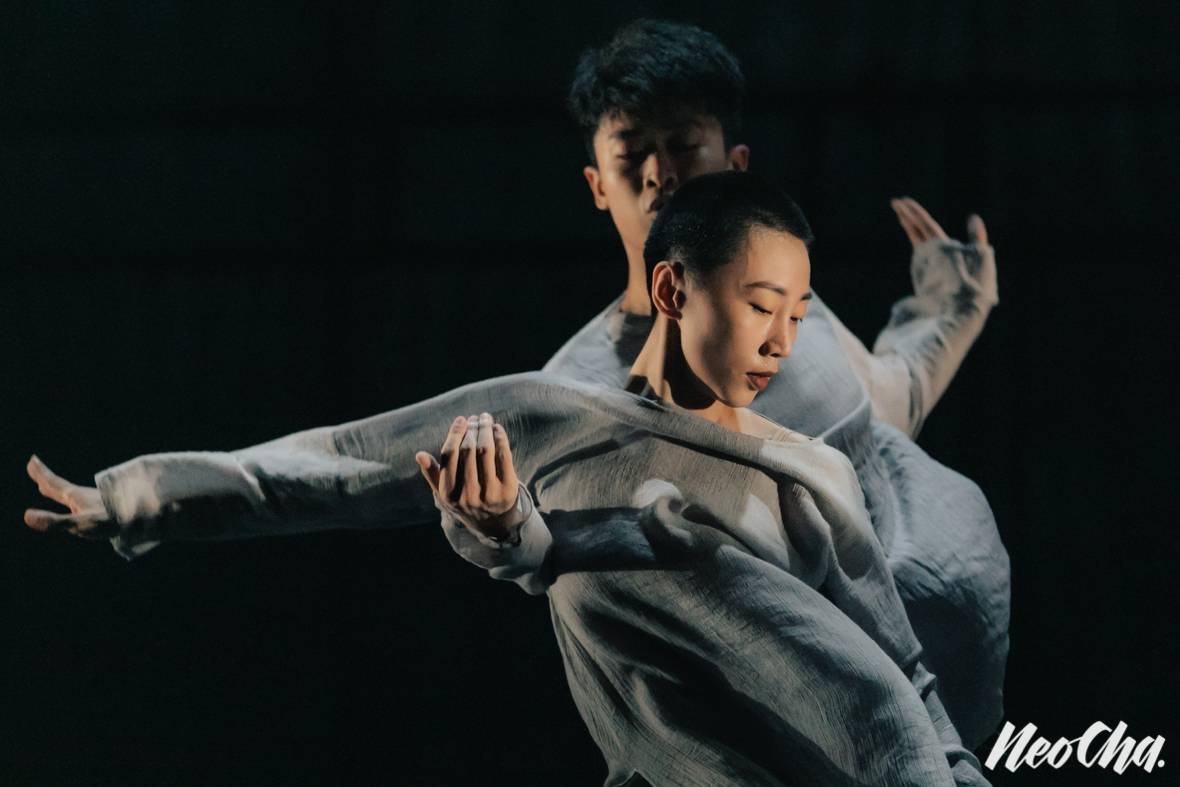 Successively, she worked in Guangdong Modern Dance Company (GMDC), Shanghai Jin Xing Dance Theatre, Beijing Tao Dance Theatre and BeijingDance/LDTX, and participated in performance tours with these dance troupes in art festivals held in over 25 countries. In 2014, she founded XIEXIN DANCE THEATER and started her career as an independent choreographer and artistic director of the company that bears her name. Jorma UOTINEN, then Artistic Director of the Kuopio Dance Festival in Finland, commented: "In Xie Xin's work, I have found the future I haven’t found in the development of European modern dance. Her works have extremely sensitive uniqueness and specificity". Ms. Wendy PERRON, former Editor-in-Chief of Dance magazine in America, praised XIE Xin: "An extraordinary dancer whose work is similar to that of Cloud Gate Dance Theatre and resembles the floating clouds and waters, but more powerful and original.

Awards and Honors
In 2016, Moment《彼时此刻》, Gold Award, 10th Lotus Cup Contemporary Dance Competition, China ;
In 2016, Murmur 《慢·漫》, Gold Medal, 13th Seoul International Dance Competition, Korea;
In 2015, Gold Award, 14th Italian Premio Roma Danza 2015 choreography competition, Rome，Italy;
Kuopio Dance Festival 2016 Contract Award, Finland;
In 2015, Silver Award & Audience Award, 29th International Choreographic Competition, Hannover, Germany;
From 2014 to 2016, Gold Award for Performance and Choreography at the 6th and 7th East China Professional Dance Competition;
In 2013, Silver Award & Best Performance Award of the 2nd Beijing International Ballet and Choreography Competition (IBCC);
In 2012, Championship and the Jinqian Award, 2nd Top Dancer National TV Dance Competition, Guizhou, China.
From 2016 to 2017, invited to join the 47th and 48th Kuopio International Dance Festival in Finland for two consecutive years;
From 2018 to 2019, invited by the Hessisches Staatstheater Wiesbaden to create a work called Special Moment, premiered at the Hessian State Theatre of Wiesbaden in Germany.
In 2019, Invited by BalletBoyz to choreograph the Ripple, and premiered in London, UK.
In 2018, Invited as a choreographer to co-produce The Rite of Spring and premiered at the Shanghai Oriental Arts Centre.
In 2017, Invited by Young Artists Platform of Dance of China Dancers Association and the 46th Hong Kong Arts Festival to co-produce a new work, ..... After ......, and performed at the National Centre for the Performing Arts and the Hong Kong Cultural Centre.
In 2016, her new work UNKNOWN was premiered at the National Centre for the Performing Arts (NCPA) in Beijing and STA Experimental Theatre, Shanghai;
In 2016, Listen to the body 《听见身体》.was created for Shanghai Dance Theatre and premiered at the Shanghai Grand Theatre.
In 2016, invited as the first guest dancer of Hong Kong Dance Company to co-create and perform Zero《零》 in the Japan Arts Festival and 8/F Platform, Hong Kong.
In 2015, the invited work FROM IN by Young Artists Platform of Dance of China Dancers Association was premiered at the National Centre for the Performing Arts in Beijing, and in 2016, it was invited for performance in the Lotus Cup Dance Competition.
In 2014, Falling and Plus was invited to perform at the 42nd Hong Kong Dance Festival.

Young dancer and director, graduated from the Chinese People's Liberation Army Art Academy. He has won 6 international awards such as the Seoul International Dance Competition, Denmark Copenhagen Modern Dance Competition, Italy Rome Modern Dance Competition, and more than 10 gold awards in domestic competitions such as the Chinese Art Festival Wenhua Award, the National Five-One Project Award, and the National Dance Competition. His first director's work "Grand Hotel" premiered at the National Centre for the Performing Arts, and in 2018 was awarded the "Top Ten Performances of the Year" by the "Beijing News". Representative works: "The Past in Shawan", "The Road of Heaven", "One Throw and One Flick", "Silk Road", "Tsing Yi", "Mulan" and so on. Director/starring works: "Grand Hotel" and "Dream Chaser".

Xiexin Dance Theatre （XDT） focuses on creation of original works of contemporary dance, body research and education of contemporary dance. Since XDT establishment in 2014, the dance group gradually developed into the backbone of the development of contemporary dance in china. XDT has been divided three part to operation: that include creation and performance(XDT-Xiexin dance theatre) 、 education(XDT- Education) 、 clothing brand(XDT- Vanguard body) .Xiexin dance Theatre emphasis on explore the unique luggage of body, and amplification the body technology so that to forming a self-concept of world frontier on technology style. In the creation side, Xiexin`s work has turn the technology to emotion of human, meanwhile all the possibility of body movement were in order to research the most accurate luggage of body. they try to make the abstract dance can come to the heart directly so that leave a style of Xinxin`s work.
Xie Xin, artistic director, has won many gold medals in modern dance competitions at home and abroad. The works have been invited by more and more influential international art festivals, including the Finland International Dance Kuopio Festival 、 Stuttgart Colours International Dance Festival、France Summer Art festival 、 Swiss STEPS dance festival、Italy Orient Occident dance festival、 Germany Wiesbaden Theatre perfomance season、Sibnik dance festival、 Split dance festival、 Hong Kong Arts Festival、 Hongkong city contemporary dance festival、 China contemporary dance two year exhibition、 Beijing spring art festival、China dance twelve days in Country Grand Theatre、 New York Autumn dancefestival、 and have invited by Theatre of Lyons dance house and so on.
The troupe future will annually invite internationally renowned choreographer who came to
China for contemporary dancers created new works, and teach workshops. Committed to the construction of international contemporary dance exchange platform, focusing on the creation of international cooperation projects and high quality presentation.Representative work of Xiexin dance Theatre： 《From IN》,《Harmonic series》,《UNKNOWN》,《Obsessive》,《Entropy》,《Reflection》,《Falling》,《special movement》,《Plus》,《FLOSATING》,《FLOW MARK》,《Face 2 Face II-Time·Design·Boby》,《Murmur》,《Monent》,《My Other Me》,《Listen to your body》,《the Nearest Far》.

Valid ticket must be produced to gain entry.

Please keep the ticket properly, or the admission will be defined if the ticket is lost, destroyed or painted on.

4. Entering time: The audience can start to enter the auditorium 60 minutes before the performance starts. 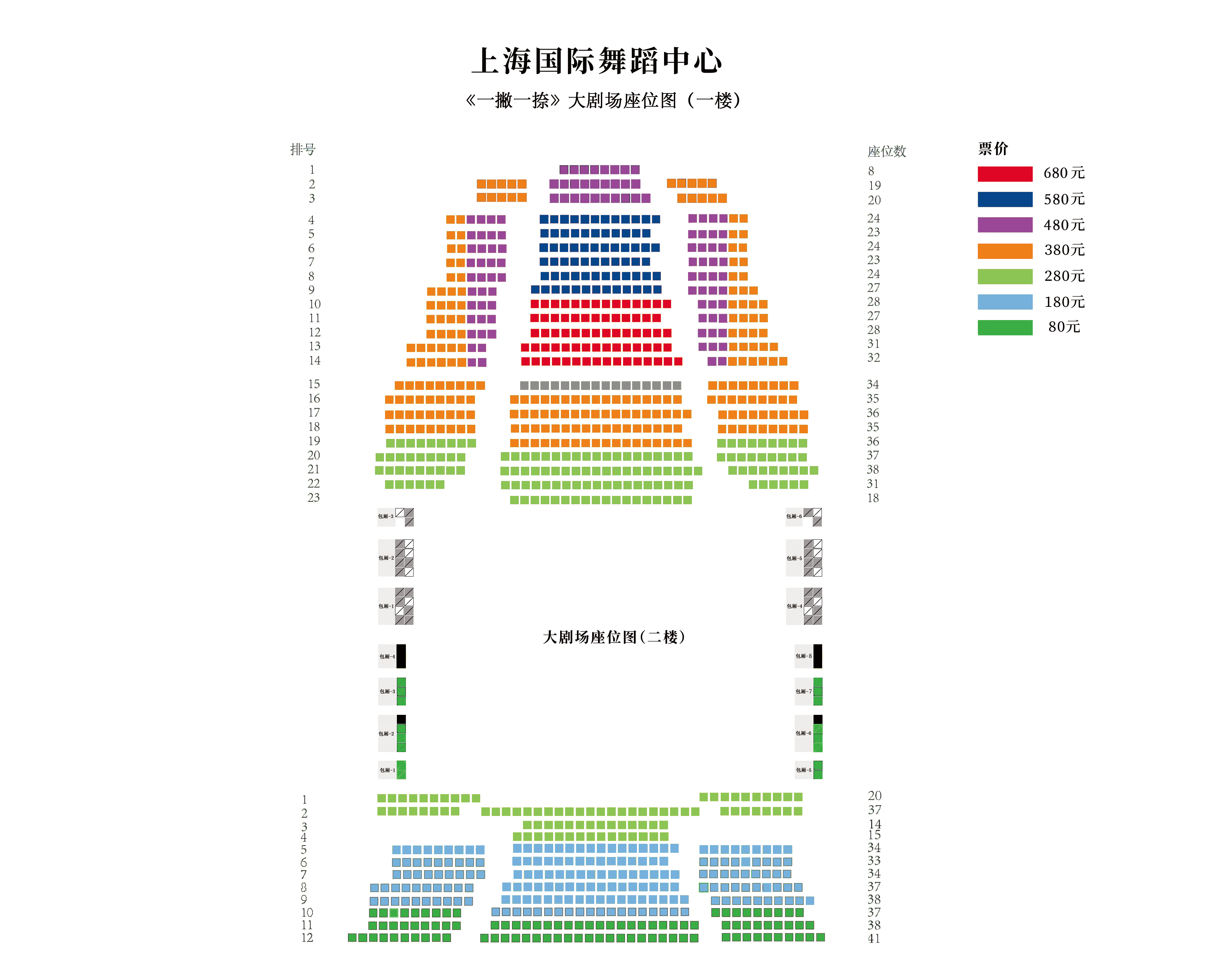