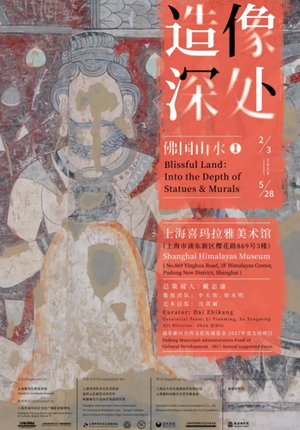 This exhibition is co-organized by Shanghai Himalayas Museum, Qiuci Institute, Art Institute of Maijishan Cave, together with Shanghai International Culture Association. We bring to Shanghai, for the first time, numerous world cultural heritages, such as murals of Quici, Xinjiang, reputed as the cradle of Chinese Buddha culture, and murals and statues of Maijishan Cave, one of the four largest grottoes in China. Crossing 5,000 km, a total of 80 art treasures will be presented as the first exhibition of Shanghai Himalayas Museum in 2018. 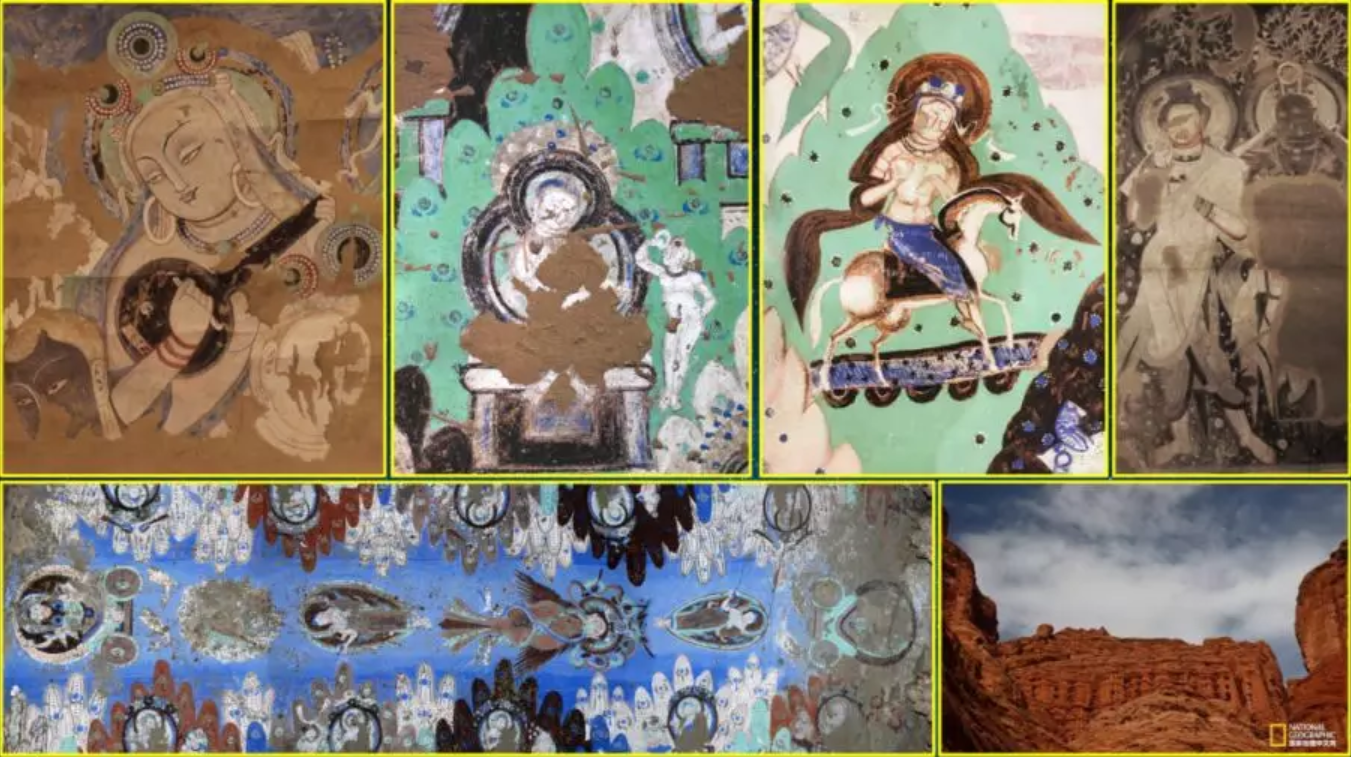 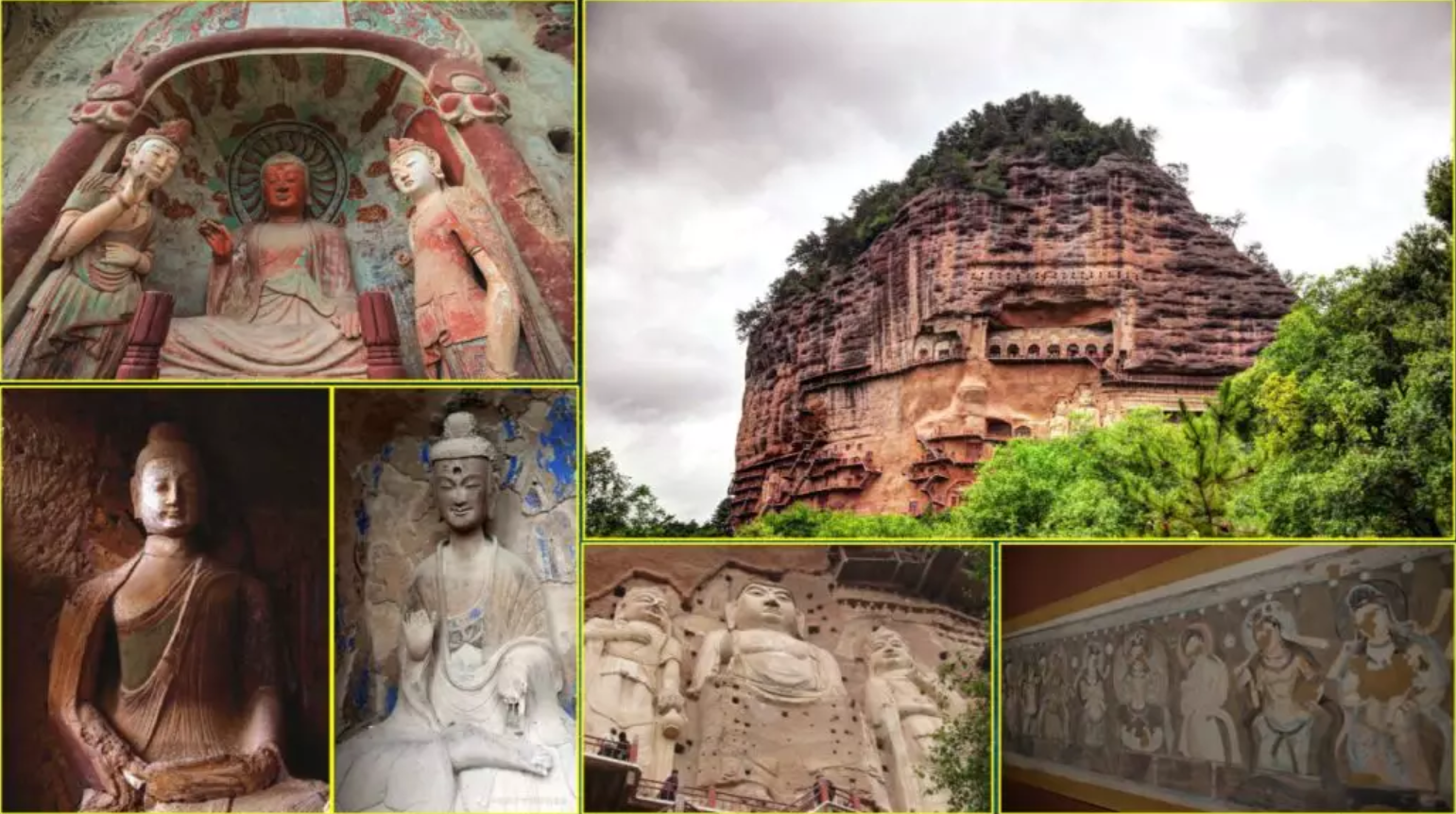 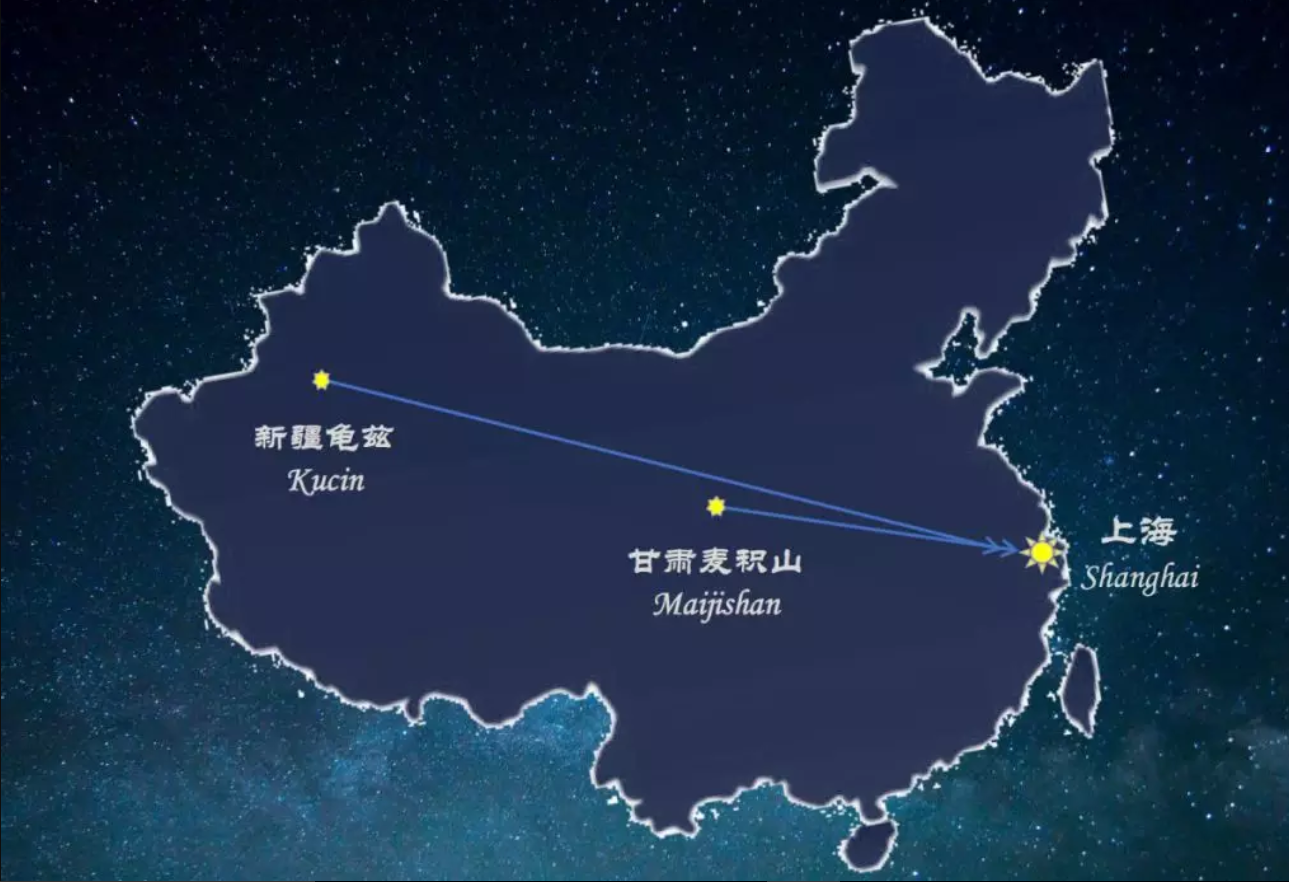 We bring to Shanghai, for the first time, numerous world cultural heritages, such as murals of Quici, Xinjiang, reputed as the cradle of Chinese Buddha culture, and murals and statues of Maijishan Cave, one of the four largest grottoes in China. Crossing 5,000 km, a total of 80 art treasures will be presented as the first exhibition of Shanghai Himalayas Museum in 2018, and will be open to the public from Februray 3, 2018 to May 28, 2018. 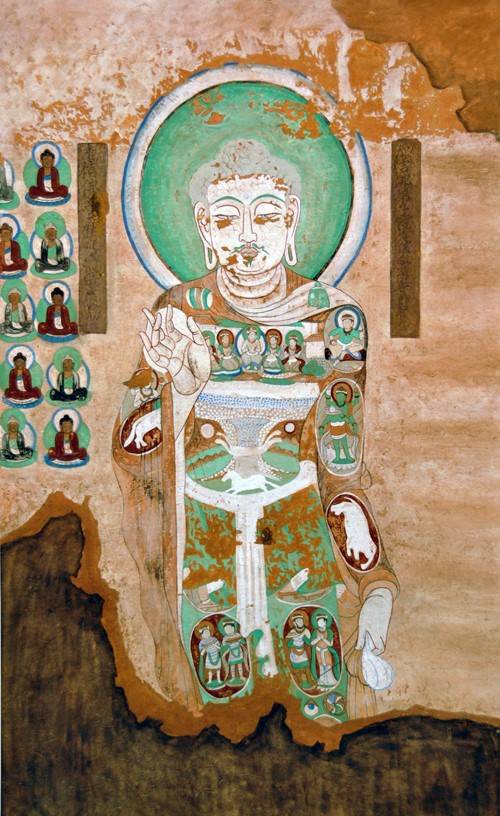 Vairocana Buddha, A-ai Grottoes, 8th Century, H: 146.7 cm W: 88.5 cm, Copied by Zhao Liya
Vairocana Buddha means the pervasive illumination of the lights of Buddha. There are three Buddhas in Buddhism, Vairocana is the Dharmakaya Buddha, Rocana is the Sambhogakaya Buddh,a while Sakyamuni is the Nirmanakaya Buddha. This mural shows the whole inner world of the Vairocana Buddha’s body, who is able to turn the wheel of Dharma, tame the sentient beings and with boundless supernatural power. A Buddha and Two Bodhisattvas, Cave 44, Maijishan Grottoes, Western Wei Dynasty, Buddha: H: 171 cm W: 106 cm T: 65 cm; Bodhisattvas: H: 140 cm W: 68 cm T:16 cm, Copied by Sun Jing
The Buddha's head features a high ushnisha with a whirlpool pattern, long eyebrows, narrow eyes, a straight nose and a small mouth turned slightly inwards. He is wearing an inner garment, tied in front of his chest, and a kasaya robe draped over his shoulders. He sits cross-legged on his dais. The Buddha's ushnisha, chest and robe all bear traces of paint, and the robes draped over his body and the dais ripple with curved lines giving a thick, heavy feel and clear layering with highly decorative tones. The Buddha's face is broad and round, with a dignified air. He looks down with a slight, affable smile, the embodiment of the formal beauty of the Western Wei period. The Buddha is flanked by two bodhisattvas, each wearing a jeweled crown, bare-chested and wearing long skirts, with silk ribbons draped over their shoulders. They have beautiful faces and graceful postures. These are representative works of Western Wei sculpture. 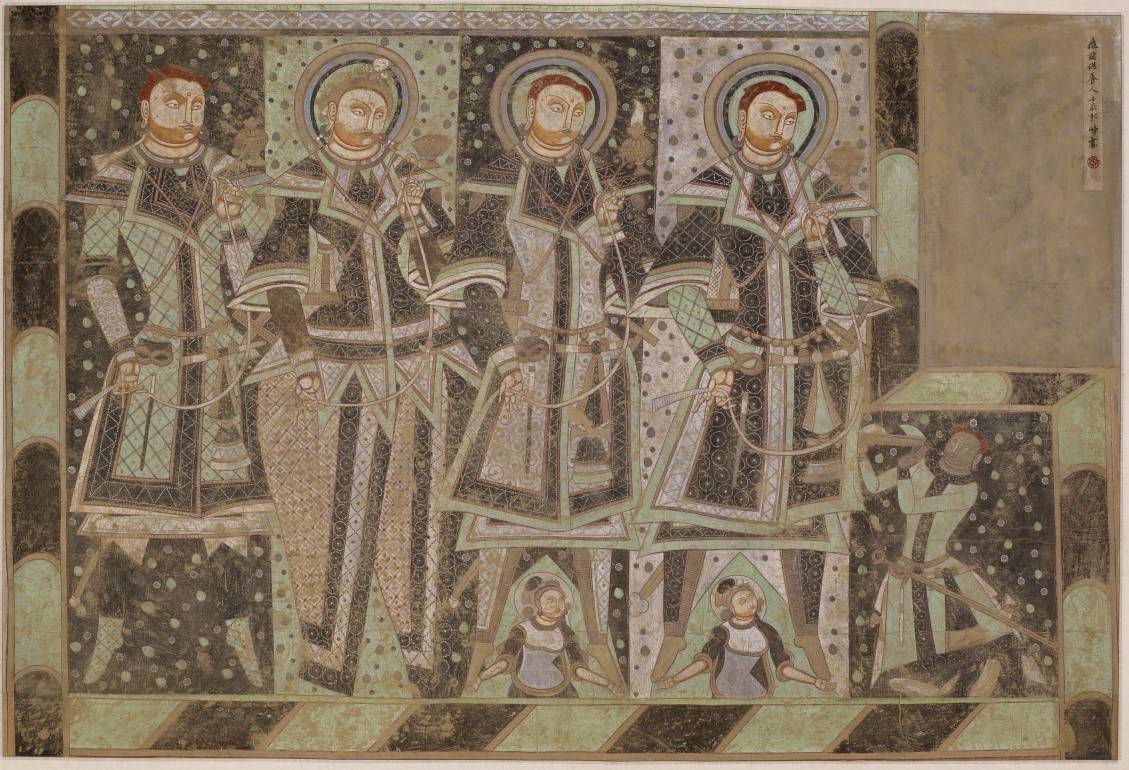 The Portrait of Donors in Qiuci Grottoes, Cave 14, Keziergaha Grottoes, 6th Century, H: 114.5 cm W: 170.5 cm, Copied by Guo Feng
This painting depicts the image of Qiuci nobles making offerings to the Buddha. The donors in this painting wear Qiuci style costumes with large collars, which had enormous influence on Chinese clothing style after Northern Dynasties. Three providers’ head are
surrounded by light; two Gods of Earth are at the bottom, who hold up the feet of two providers. Standing Bodhisattva, Cave 123, Maijishan Grottoes, Western Wei Dynasty, H: 123 cm, W: 49 cm, T: 28 cm, Copied by Duan Yiming
This sculpture is located on the left side of the cave's main wall. It wears a high crown lined with flowers and has a supple face with thin, curved eyebrows, narrow eyes, a straight nose, and thin lips, with its mouth turned slightly inward. The collar of the statue's robe hangs low on the chest, and an ornate silk scarf hangs from the shoulders. The arms hang naturally, and the right hand is clasped over the stomach. The statue has a lithe figure in a reserved posture, with layered clothing rich in texture. The extravagant clothing embodies the figure’s nobility, while the drooping eyes and slight grin profoundly capture the feminine gentleness and tranquility of bodhisattvas, conveying an elegant and magnanimous feel. This is a representative work of bodhisattva art from the Western Wei period. 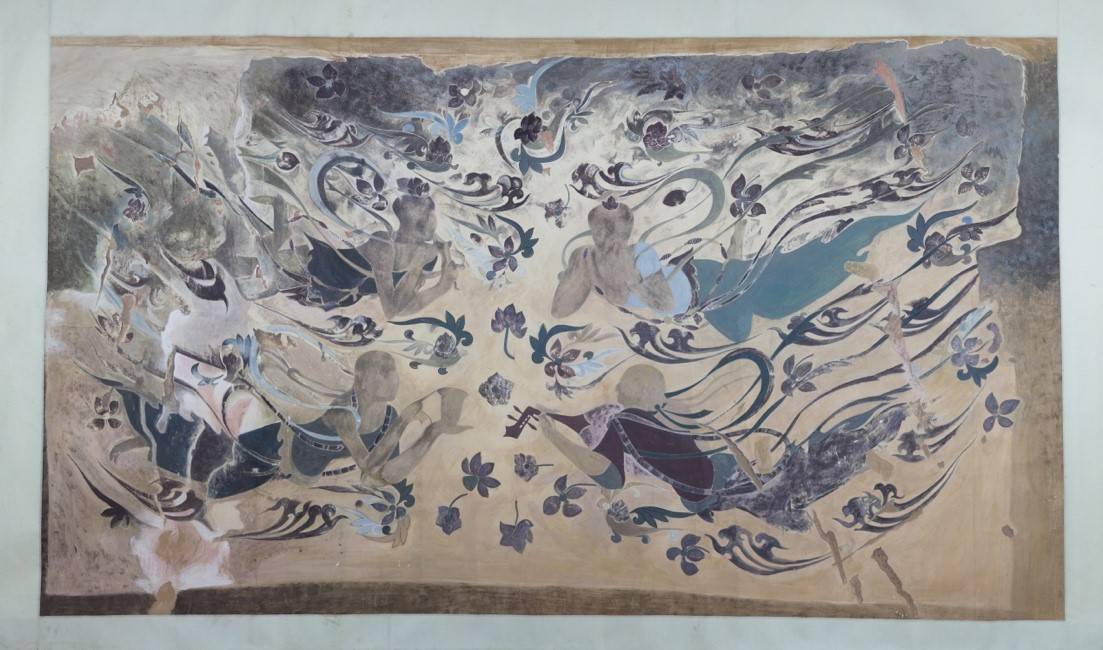 Flying Apsaras, Niche 7, Cave 4, Maijishan Grottoes, Northern Zhou Dynasty, H: 200 cm W:400 cm, Copied by Li Guanglin
Painted above the cave's shrine, this is one of seven large paintings of flying apsaras. Two pairs of figures fly towards each other, some carrying musical instruments, some carrying offerings as they fly freely among the flowers and clouds drifting through the air in a joyous and moving scene. The original and unique creative forms are not only light and elegant, bestowing the figures with a fluid sense of motion, they also embody the exceptional knowledge and rich imagination of the painter. The faces and limbs of the figures are shaped by a thin layer of high quality clay, while their robes, flowing ribbons, adornments and surrounding cloud and flower patterns are rendered in colored paint. This creative combination of relief sculpture and painting creates a sense of the figures leaping out of the painted plane. It is a singular work among the cave murals of China, a classic of the form. 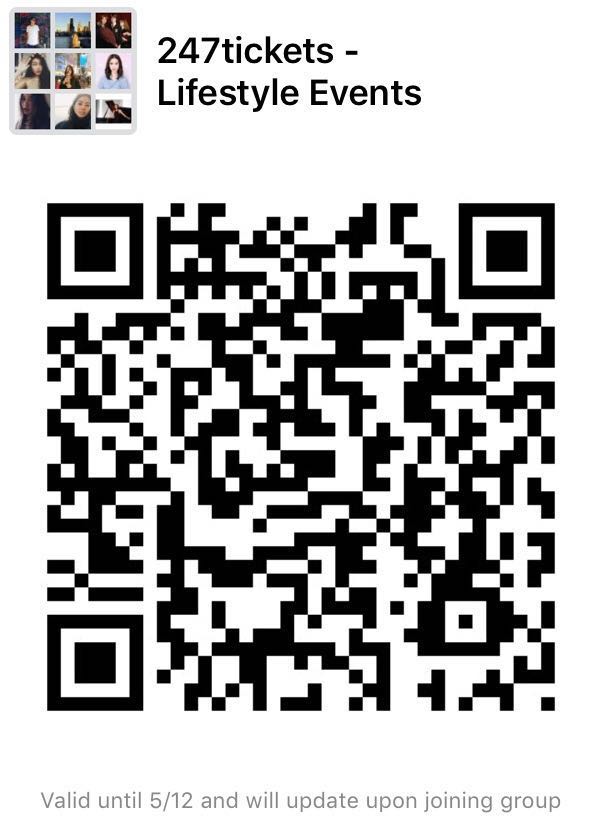