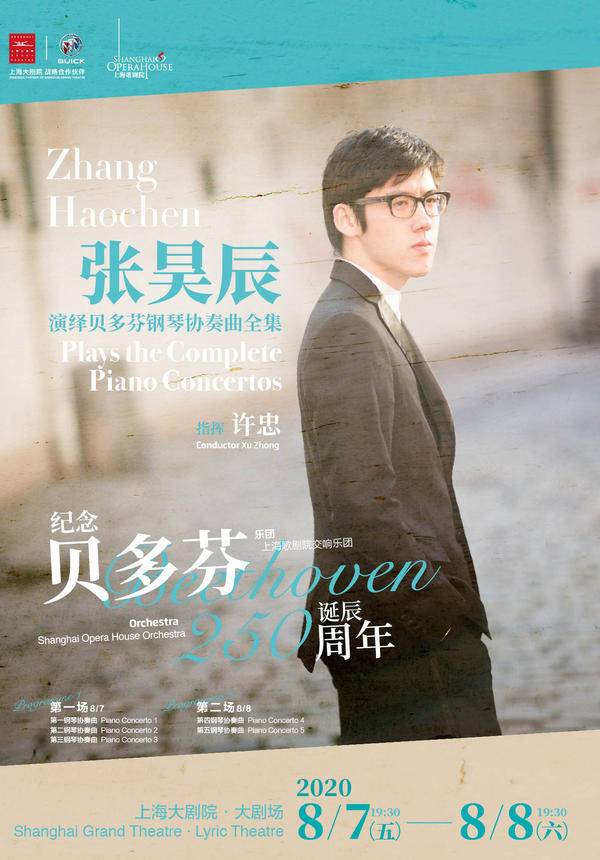 Venue:
Shanghai Grand Theatre Lyric Theatre
300 Renmin Da Dao, near Huangpi Bei Lu Huangpu Shanghai
Date:
8/7/2020 - 8/8/2020
This ticket is only available as a paper ticket
After you have joined the waiting list, you will be notified if tickets become available via SMS.

👉 Instant Confirmation
👉 Children Under 1.2m Not Permitted
👉 All Attendees Require a Ticket
👉 No Cancellation

All information on programme, artists and duration is subject to change

Since his gold medal win at the Thirteenth Van Cliburn International Piano Competition in 2009, Haochen Zhang has captivated audiences in the United States, Europe, and Asia with a unique combination of deep musical sensitivity, fearless imagination, and spectacular virtuosity. In 2017, Haochen received the prestigious Avery Fisher Career Grant, which recognizes talented musicians with the potential for a major career in music.

Haochen has already appeared with many of the world’s leading festivals and orchestras including the BBC Proms with Long Yu and the China Philharmonic; the Munich Philharmonic with the late Lorin Maazel in a sold-out tour in Munich and China; the Easter Festival in Moscow by special invitation of Maestro Valery Gergiev; the Sydney Symphony and David Robertson in a China tour; and the NDR Hamburg and Thomas Hengelbrock in a tour of Tokyo, Beijing, and Shanghai.

In the 2019-20 season, Haochen continues his ongoing collaboration with The Philadelphia Orchestra and Yannick Nézet-Séguin with concerts in Philadelphia and a tour in Japan. Additional symphony highlights include Singapore Symphony, performances of all the Beethoven concertos with the Hong Kong Philharmonic, and a tour in China with the National Symphony Orchestra and Gianandrea Noseda. He also gives solo recitals across China and Europe.

In recent seasons, Haochen debuted with the Lucerne Festival Orchestra and toured Asia with The Philadelphia Orchestra. He has given extensive recital and concerto tours in Asia with performances in China, Hong Kong, and Japan. In October 2017, Haochen gave a concerto performance at Carnegie Hall with the NCPA Orchestra, which was followed by his recital debut at Carnegie’s Zankel Hall.

Haochen is also an avid chamber musician, collaborating with colleagues such as the Shanghai, Tokyo, and Brentano Quartets. He is frequently invited by chamber music festivals in the United States including the Santa Fe Chamber Music Festival and La Jolla Summerfest.

Haochen’s performances at the Cliburn Competition were released to critical acclaim by Harmonia Mundi in 2009. He is featured in Peter Rosen’s award-winning documentary chronicling the 2009 Cliburn Competition, A Surprise in Texas.

Haochen is a graduate of the Curtis Institute of Music in Philadelphia where he studied under Gary Graffman. He has also been studying periodically with Andreas Haefliger in Vienna. He was previously trained at the Shanghai Conservatory of Music and the Shenzhen Arts School, where he was admitted in 2001 at the age of 11 to study with Professor Dan Zhaoyi. In January 2019, Zhang was hired as Resident Artist of Southern University of Science and Technology.

Venue:
Shanghai Grand Theatre Lyric Theatre
300 Renmin Da Dao, near Huangpi Bei Lu Huangpu Shanghai
Date:
8/7/2020 - 8/8/2020
This ticket is only available as a paper ticket
After you have joined the waiting list, you will be notified if tickets become available via SMS.