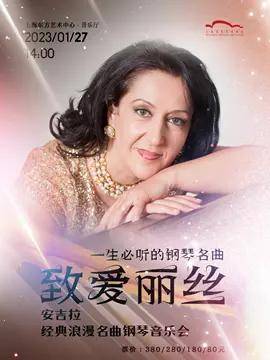 👉 Children under 1m are not allowed to enter

👉 Children over 1m will be admitted by full tickets

Listening to a high-level famous piano music concert is like reading a world famous book, it will make your soul full of fragrance... "To Alice's Must-Listen Piano Music Concert", the performance master Angela will Take you into the fantastic music world! You will listen to Viennese classical music and romantic music, including Beethoven's "Fur Elise" and "Sonata", "Piano Poet" Chopin's "Nocturne" and "Ballade", "King of Piano" Li Si The unique "Rhapsody", as well as the Russian romantic music of Tchaikovsky, Scriabin, and Aru Qiunian, the classics of piano music classics, a graceful journey of classic romantic music, feel the beauty of music together! For piano children and parents, listening to a high-level concert is better than ten piano lessons! This is a rare grand piano music event. Wind Swept Over the Mountains

Evening in the Ararat Valley

Dr. Angela is a Russian-American pianist, an internationally renowned music artist, pianist and educator. Angela's art perfectly exemplifies our definition of a "Russian Piano School" performer and educator. She was born and grew up in Russia. She started to learn piano at the age of 4, was admitted to the Tchaikovsky School for Gifted Children at the age of 13, and studied at the Moscow State Tchaikovsky Conservatory of Music at the age of 17 under the tutelage of the famous pianist Ye Fugen Ni Marinen, the last assistant teacher of Heinrich Neuhaus, one of the founders of the Russian school, was highly praised by him as "a pianist full of romantic feelings, poetic, passionate and virtuoso ".

Angela founded the famous "Tchaikovsky School of Music" in Los Angeles and served as the school's music director. Many students, including the Curtis and Juilliard Schools, came to study with her. During this period, Angela also obtained a Doctorate in Piano Performance (DMA) and an Artist Diploma in the United States.

She has performed in the United States, Europe, Asia and the former Soviet Union. She has appeared in Condividiamo Bellezza Concerti nelle Ville e nei Chiostri Music Festival in Italy, Sommerakademie Neuburg an der Donau Music Festival in Germany, Woerthersee Classics Music Festival in Austria, and Shanghai International Piano Music Festival. In 2014, his recorded album "Diabelli Variations" immediately attracted the attention of many music critics as soon as it was released. In France, Jean-Yves Duperron hailed Angela as "the worthy successor of the pianists Gilels and Richter" (Classical Music Sentinel).