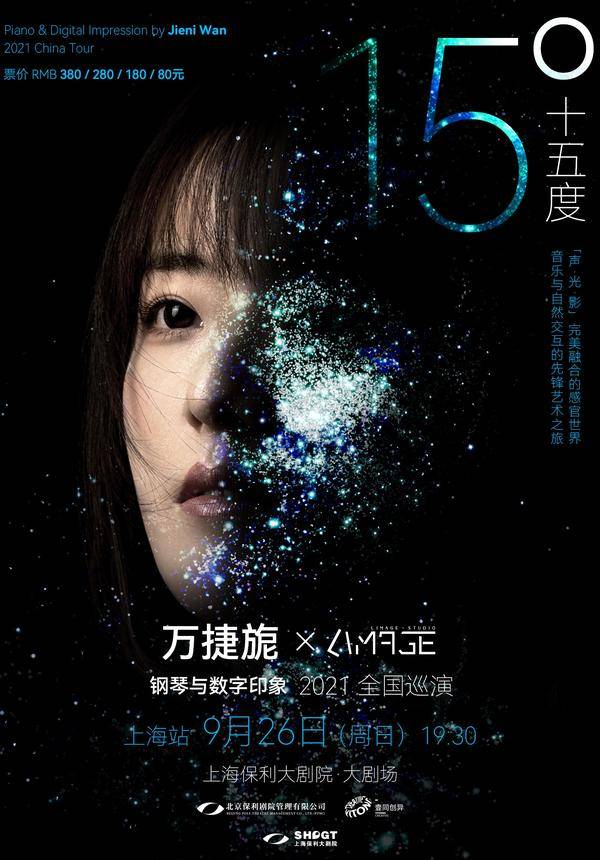 Venue:
Shanghai Poly Grand Theatre
No.159 Baiyin Road Jiading Shanghai
Date:
9/26/2021
This ticket is only available as a paper ticket

At the age of 20, she performed as a soloist with the world-renowned conductors Zubin Mehta and Christopher Eisenbach. While at the age of 23, she had already performed with more than 30 famous symphony orchestras in China and abroad. She has performed in many of the world's most prestigious concert halls and major performing arts venues, and has frequently collaborated as a piano soloist with leading orchestras and conductors both at home and abroad. While performing Western classical piano works, Jieni also spares no effort to promote Chinese music, bringing classical Chinese piano solos and concertos to the stage at home and abroad.

The concept of the concert, "15°", originates from the interaction between music and nature: the "fifteen degrees" in the meter contains twenty-four notes; in the natural twenty-four seasons, the sun's movement trajectory takes every fifteen degrees as a season. Fifteen classical pieces by Chopin, Grieg, Debussy, Liszt, Tan Dun, Ding Shande and other Chinese and foreign composers will be organized according to the natural seasons. The notes between the fingers of the performers will be transformed into meteorological impressions of nature through technology, interpreting the wonderful correlation between music, natural seasons and digital algorithms.

Venue:
Shanghai Poly Grand Theatre
No.159 Baiyin Road Jiading Shanghai
Date:
9/26/2021
This ticket is only available as a paper ticket