She is "unique" in the field of dance.

She is a brand choreographer appointed by Hermès headquarters.

From her sincarity to insistence on dance, she constantly challenges her physical limits.

She is the co-artist of the Shanghai International Dance Center Theater and Chinese contemporary dance artist full of personal style -Gu Jiani.

She's back with new show that she's been honing for three years.

She incorporates elements of Chinese traditional martial arts, such as Wing Chun and Zhan Zhuang, into her works.

It perfectly shows the scene of the transformation of space, the migration of living beings and human beings.

She uses her body to express the instinct of "transition". 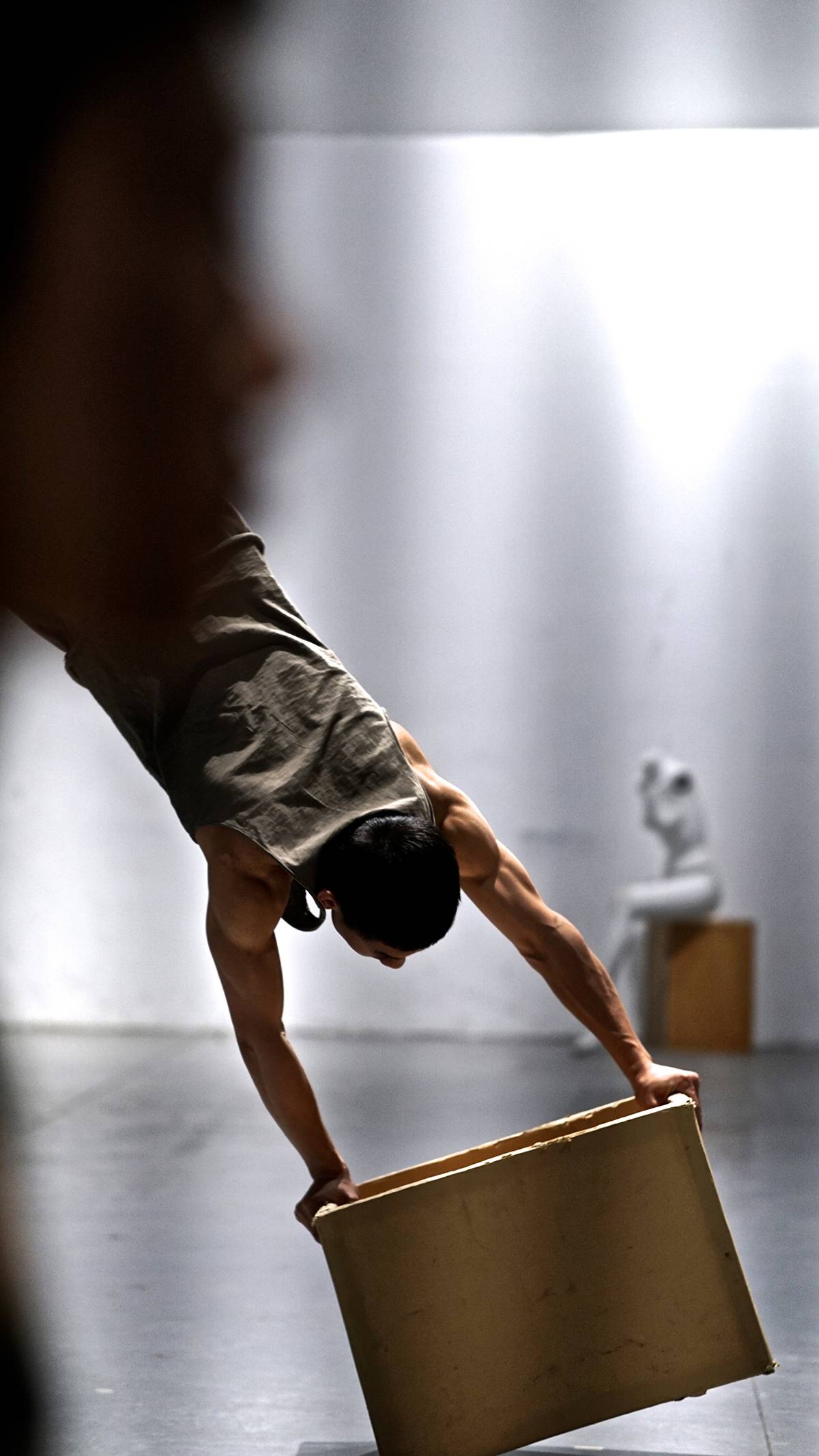 The migration of living things, the migration of human beings, the transformation of space... The development of the whole human and universe history is inseparable from transition. In this show, Gu Jiani, a contemporary dance artist, interprets a grand theme of life - "migration" with her own style of dance.

The most stylized contemporary dance artist in China integrates Yongchun and zhanzhuang into his works.

In the past few years, UNTITLED GROUP has been conducting exercises called "bar ·Thrust". When extracting the elements of traditional martial arts, UNTITLED GROUP explores how to maintain the independent operation of the individual and at the same time deeply connect with others.In the chain reaction of pushing, throwing and undertaking, the transmission of force reflects the mutual support between people, which makes Gu Jiani's works different.

Challenge the physical limit, "ascetics" in the republic of dance challenge themselves and the audience

Gu Jiani, a "hermit" and "ascetic monk" in the republic of dance. She does not flinch from difficulties and injuries and has always challenged her physical limits in her works. In EXIT, she grabs a 6kg buckwheat pillow and spins and dashes... the huge energy hidden in the human body bursts out.

"TRANSITION" is no exception. Precise and breathtaking actions, incessant noise, 47 boxes seemingly placed at random.This is a very "rough" show. It is very different from the general review of the public. While the dancers are challenging themselves, they are also challenging the audience. 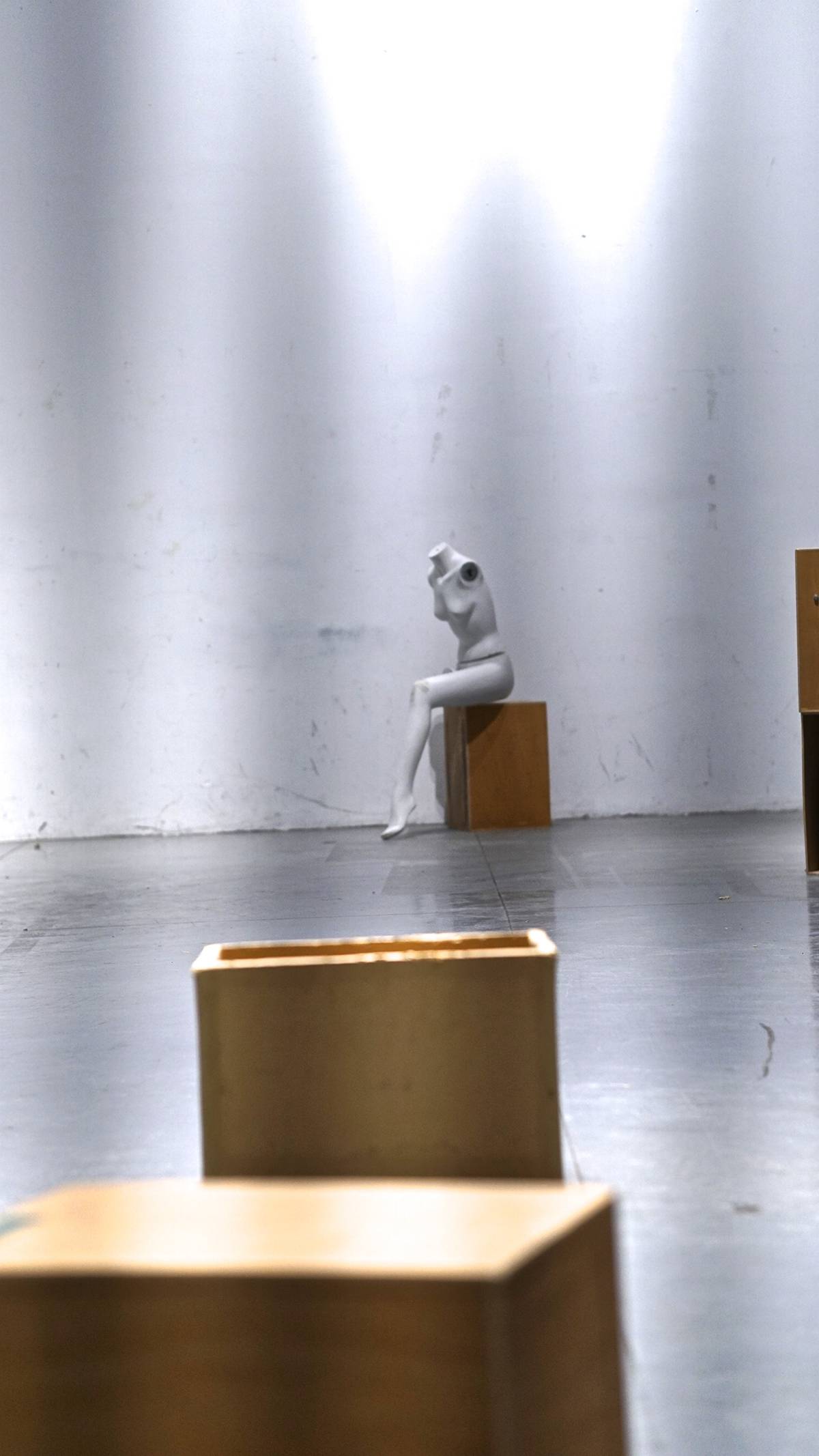 Combining with installation art, exploring the instinct of biological "transition" with limbs

4 dummy models, 47 boxes... Gu Jiani added many devices to this show. In addition, this show is based on vision and sound, and explores the past and the present in a series of phenomena such as "transition", "transformation", and "turning". The choreographer enables the four dancers to place or reorganize people and objects in different identities,establishing a contradictory but clear dance language. Through the display logic of "dislocation" and fantasy, this work observes the "transition" in life, and deeply ponders the issues of self and others, restriction and freedom, and equality of value.

In recent years, through the creation of her personal works, Gu has explored the intersection between sound, vision, psychology and physics from the perspective of movement research, with special interest in current society. Her work concerns space and objects, regenerative energy, phenomena and psychology, material epistemology and multi-dimensional thinking of life. 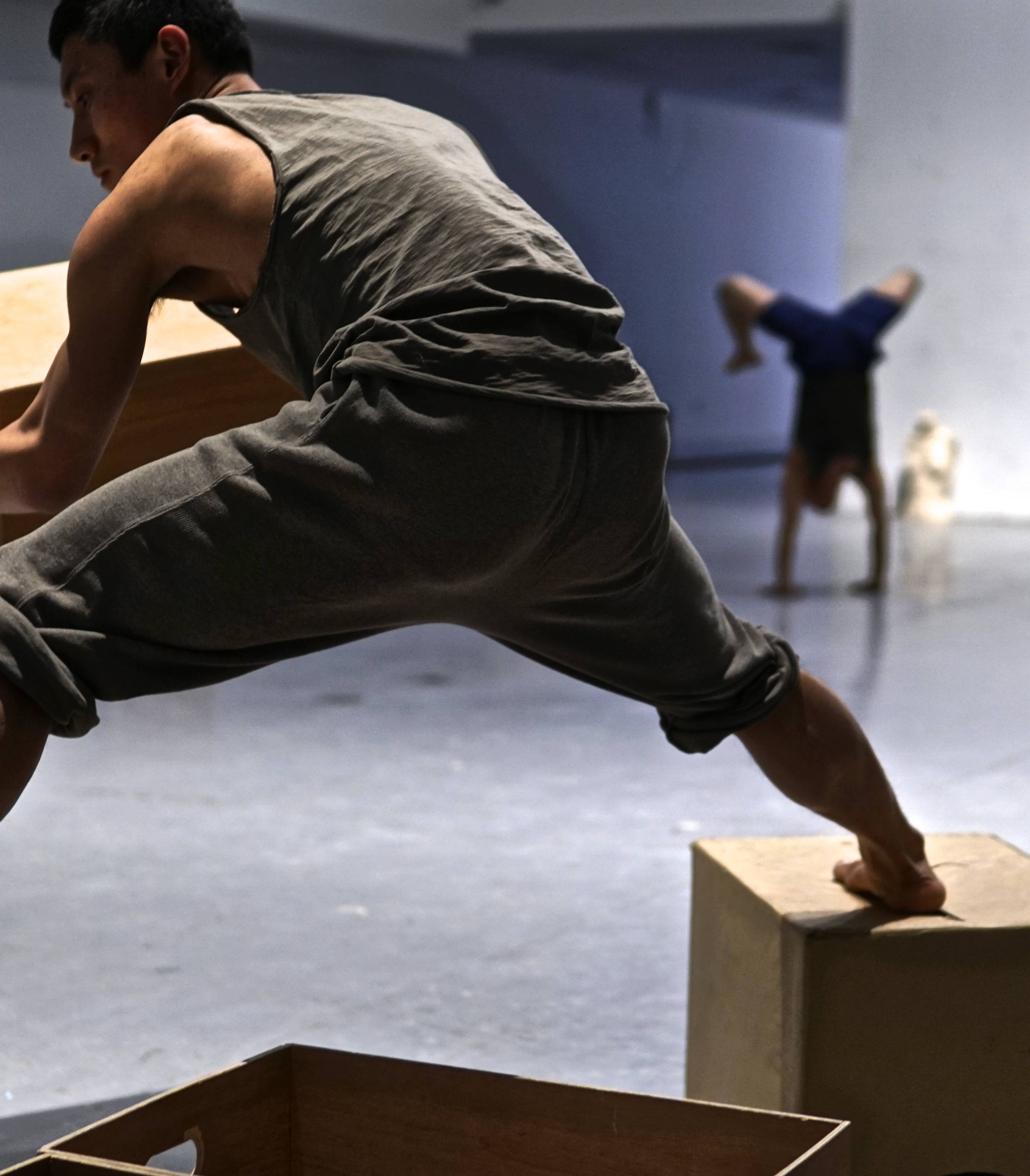 Gu excels at constructing minimalist visual images in a space, and her conceptual design and physical structures allows her work to show profound philosophy on the human level.

In recent years, she has established a series of unique game-like sports modes, whose core technology is "Push: Thrust dual connection movement”.

Her work has been on long-term display in many places in Beijing for a long time, and she has been invited to tour in northern Europe, the United States, Australia, Taipei, Hong Kong and other art festivals. She also conducted workshops at the University of Washington, Melbourne Art Center and Taipei University of the arts. Her work explores the limits and possibilities in daily life, and has attracted the attention of audiences and media at home and abroad. She was also awarded the 2020 Asian Arts and Culture fund (ACC), a New York scholarship. 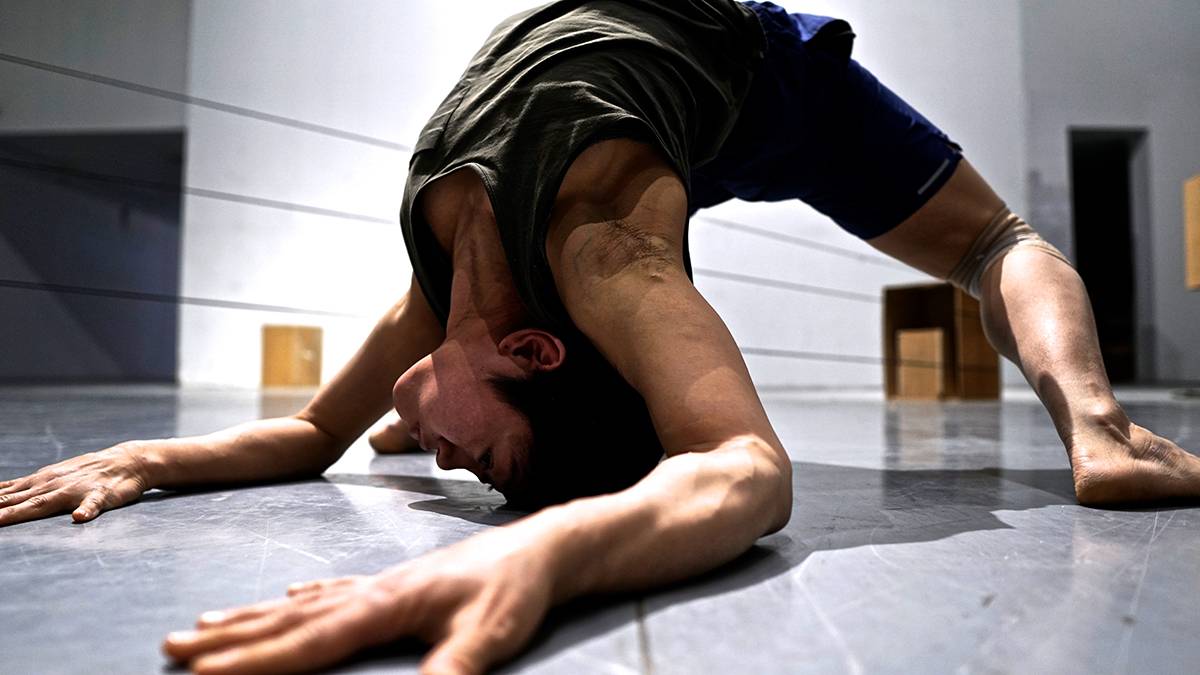 The Chinese name of UNTITLED GROUP can be translated and broken down into the components of “shi kou” and “wu". In this contrast of the two concepts, a process of extraction, inversion, and exchange occurs, allowing for the discovery of many meanings, and at the same time, a return to the thing itself. From this, is a play on the idea that the "organization" is built from no organization. This is the core behind Gu Jiani's establishment of the working group UNTITLED GROUP. The creation of the working group attempts a series of multi- media exploration through the construction of body, visuality, sound, objects and space, discovering new languages in the relationship between physics and psychology. UNTITLED GROUP is an extension of the "Go & N SPACE body plan", which was jointly established by Gu Jiani and Li Nan in 2013, and building on the work with Gu's dance partner Wang Xuanqi in 2016. 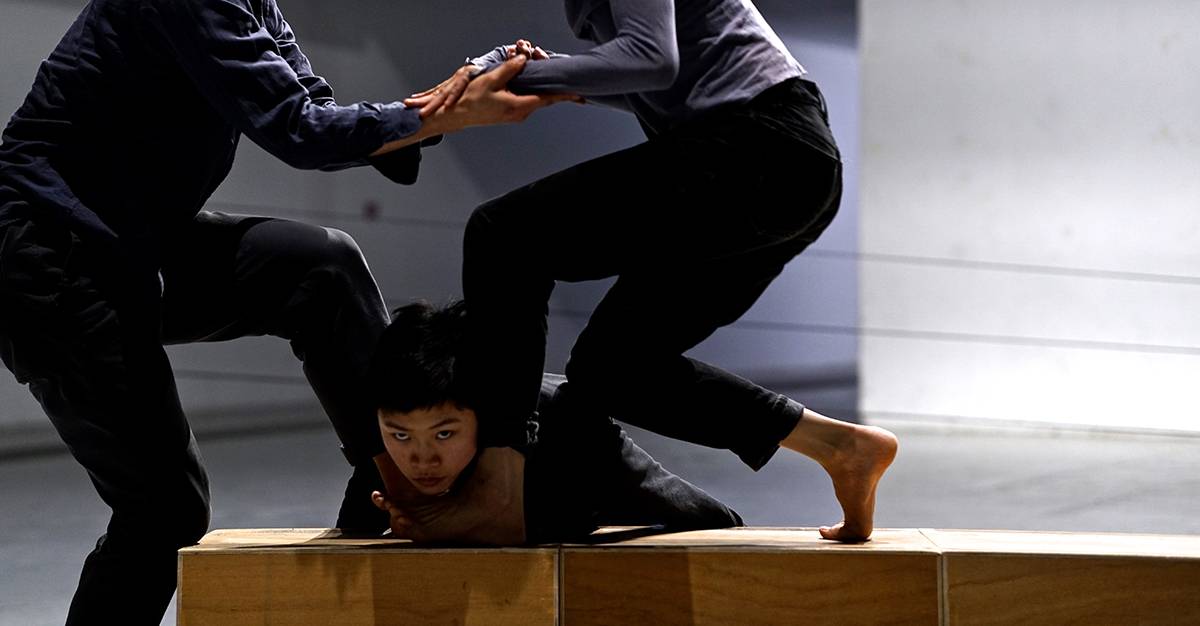