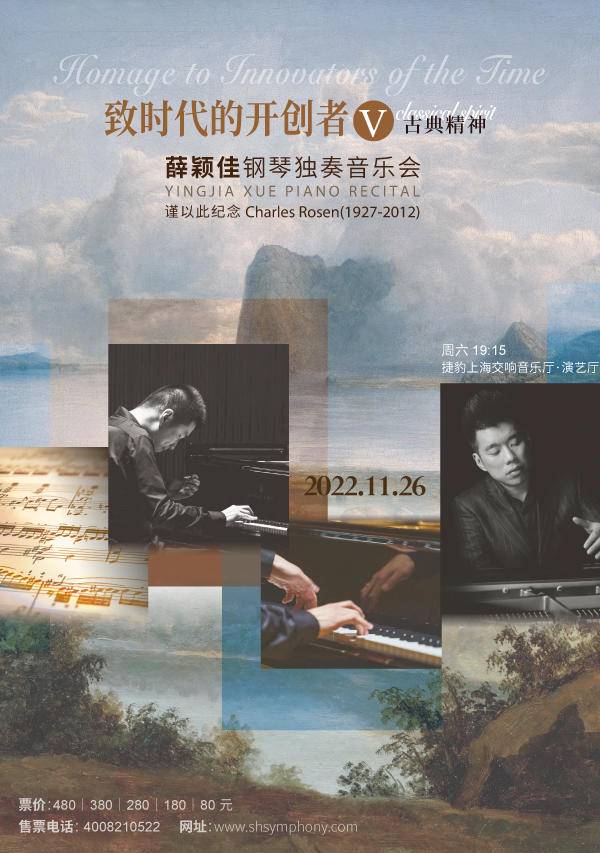 This year, Xue Yingjia's piano recital entitled "To the Pioneers of the Times" has entered its fifth year. He not only expressed his lofty respect as a pianist with the flowing sound of the piano in the special year commemorating the birth of the piano master, but also followed the composers who went upstream to create a new era at the juncture of the times. pace.

This time, "To the Pioneers of the Times V" will be based on the theme of "Classical Spirit". Perceptual classicism Under the stipulations of balance, rigor and rationality, the composer still follows the musical expression of the mind and beyond the mind.

Fantasia, derived from the Greek word "Phantasia" (fantasy), is an artistic genre that expresses the coexistence of the composer's fantasy and imagination, freedom and norms, and conveys self and style. In the Baroque period, the Fantasia genre was fully developed by the creation of the Bach family, and in the Classical period, a new paradigm was established in the creation of Mozart and Beethoven's fantasia.

Mozart's "Fantasia in C minor (KV475)" is the most outstanding one of his three piano fantasias. The highly dramatic musical mood contrast and the speed layout throughout the work constitute the principle of the work's spiral development. Has more prominent "tragic" and "dramatic". Whether it is the frequent dynamic contrasts in the works or the distinctive octave sound effects, they are the personal inner pursuits and expressions that Mozart integrated into the genre of "Fantasia".

Another master of classicism, Beethoven, pushed the genre of Fantasia to a more ambitious direction. "Sonata No. 13 in E-flat major (Op.27 No.1) "Sonata similar to Fantasia" is based on the principle of genre structure of "Sonata", but the work gradually breaks away from the classical form and becomes more prominent " Fantastic" dramatic style, as Beethoven once pointed out: "This title is used for freedom in the traditional form of the sonata". Although Opus 27 is better known as the second piece commonly known as the "Moonlight Sonata", the first piece of Opus 27 erases the boundaries between movements in traditional classical sonatas, linking the development of musical thoughts between movements , so that the structure of the work has integrity and coherence, showing Beethoven's experimental exploration of musical logic and structure. Beethoven's "fantasy" also influenced Schubert's piano music in the 19th century. In 1822, Schubert composed one of the most important and difficult works in the history of piano music - "Wanderer Fantasy (D.760 Op.15)". Although Beethoven's "shadow" can still be seen in this work, the "symphonic" use of piano sound points out a future direction for romantic piano music creation. 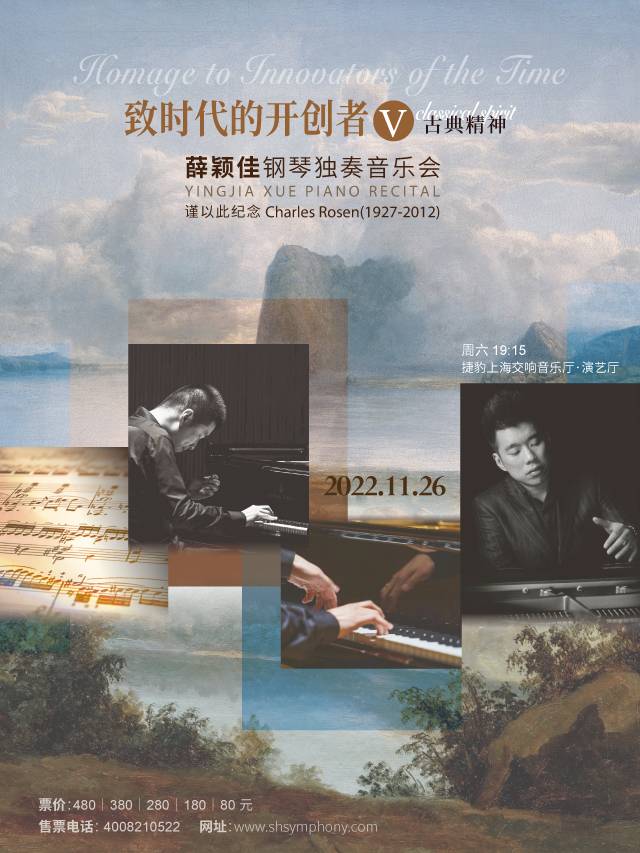 Sadness in C minor
The logical connection between tones and the direction of auditory color often become an important basis for Xue Yingjia to choose concert repertoire. core position. C minor piano works are generally recognized as "dramatic sadness" in a series of works such as Beethoven, Brahms, Chopin, etc., but going back to classicism, in the piano works of Haydn and Mozart, the key of C minor is Sexuality is already present in their creations.
Haydn's "C Minor Sonata Hob.XVI No.20" is his most representative piano sonata. As one of Haydn's model works in the middle of his creation and the official opening of the classical period, this piano sonata is more significantly influenced by " Influenced by the "Hurricane Movement", the work reflects Haydn's profundity and experimentation in the middle of his creation with profound connotation and dramatic development. Compared with Haydn's caution in the minor key, Mozart interprets the unique connotation of C minor in a more prominent tonal color way. Mozart's "Piano Sonata in C Minor (KV457)" is usually performed together with his "Fantasia in C Minor", these two works together constitute the best example of Mozart's emotional expression in C minor, the contemplative, solemn emotion is dramatic. The music unfolds in progress, which constitutes the expression of Mozart's dramatic emotional tension in his works.
From the heart, to the heart
Balance, moderation, and rational beauty constitute the core of the classical spirit, which is not only carried in Haydn, Mozart, Beethoven and Schubert's works, but also leads Xue Yingjia's direction in piano performance in music. Not only deeply influenced by composers and works, Xue Yingjia also pays special attention to the deep expression of inner musicality. The author of "Classical Style: Haydn, Mozart, Beethoven" - American musicologist and pianist Charles Rosen Charles Rosen also influenced Xue Yingjia's interpretation of his works with his profound insights, and this concert entitled "Classical Spirit" also commemorates the death of "one of the most influential musicians in the past half century"10 anniversary.
Just as Beethoven once inscribed the motto on the title page of the Solemn Mass: "Von Herzen - möge es wieder zu Herzen gehen. (From the heart, may it reach the heart)", the composer conveys his inner expression in the notes , and Xue Yingjia is not limited to the pursuit of performance technology, but also follows the extension of the self-expression of the soul, so that the music reaches the hearts of every audience. Looking forward to this journey of "To the Pioneer of the Times V", immersing in the classical spirit in Xue Yingjia's piano language, and going on a musical journey to cleanse the soul.