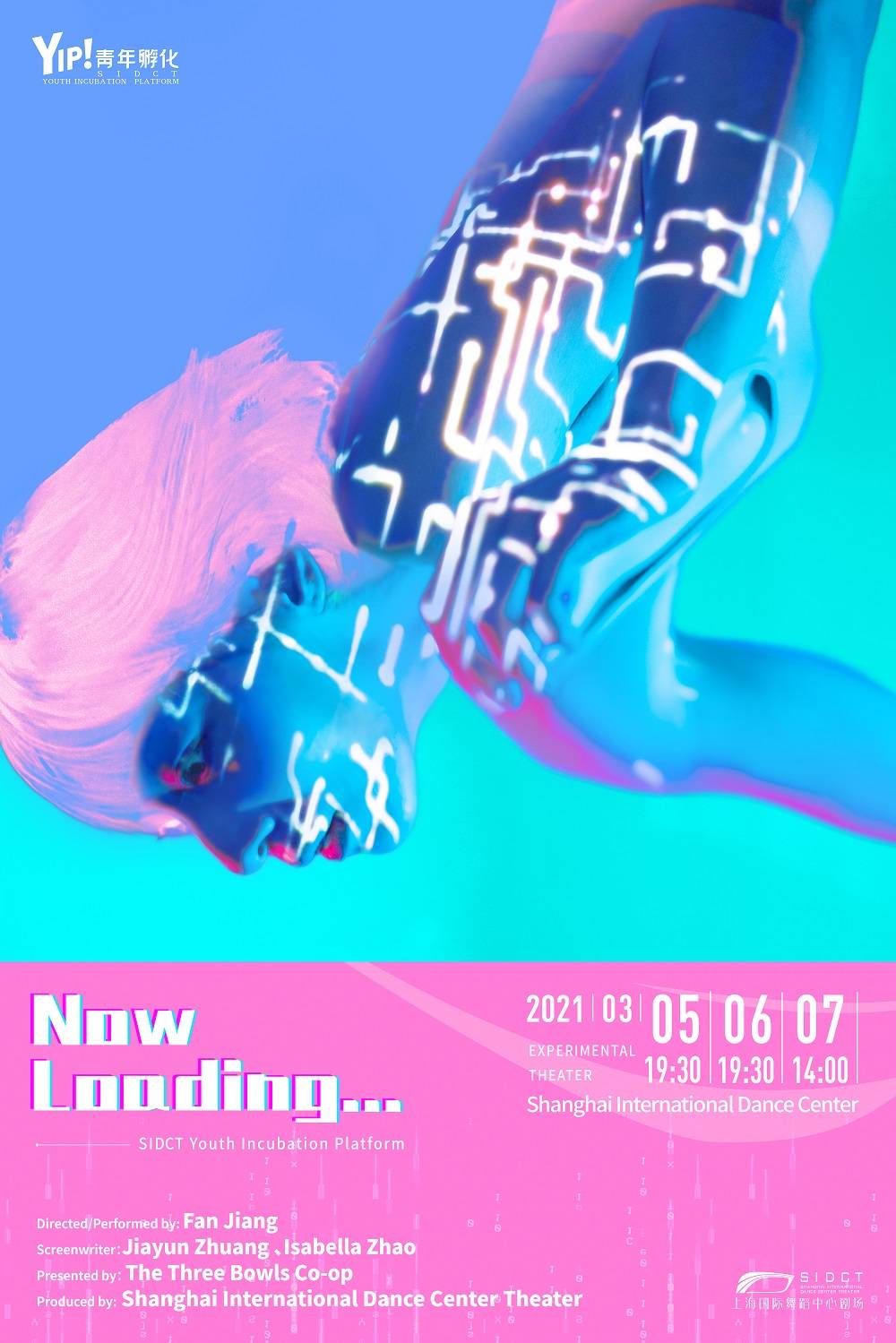 What games do you play?

Why do you play games?

Hello there, Player! Are you ready?

Welcome to the magical and poetic Fantasy Land of Games!

Produced by SIDCT, the brand new work by JIANG Fan, youth dancer and joint artist of SIDCT, invites you to discover more about yourself and your life in the world of game.

Player Niaoge is 30 years old. If you ask how well she is at playing games. Probably the answer is somewhere between a rookie and a master. She has tried all levels of games as she keeps on seeking excitement. She throws herself into the tasks while living the lives of different identities. Whenever she sees these words "Loading, Please wait...", she feels her adrenaline rushing up, telling her that this time she is sure to pass. However, there were moments when she felt distracted from the game, her excitement mixed with anxiety and guilt.

In order to keep up with other players, Niaoge moves between different games. Sometimes, she tries to survive on an alien and deserted land. Sometimes, she goes onto the battlefield with other players and chats with them offline. Sometimes, she loses track of her way home as she goes on an endless journey. Niaoge insists on fighting to improve her skills no matter how many times she fell to the ground. As she wanders about in the games, either with an aim or without one, she feels she has learnt something else about game from the other players who have led her into the world of game.

A few words from the choreographer

Many of you, like me, only started spending time on games after the outbreak of the epidemic and, for the first time, have had new understanding about what game is. In some games, we can simulate life and have endless chances to go through trials and errors. That is the "game world". Meanwhile, every player in the games has certain preferences and is of different type. Some enjoy socializing with others; some like nurturing characters; some love battling with others... What kind of player are you? Why is it that we define ourselves with these categories?

In Calvino’s Le città invisibili, he reinterpreted our cities in the voice of the ancients, and the modern cities are so magical and poetic in his writing that they seem to belong to a game world.

That’s why I thought of life as one of these magical and poetic games, only that we need to interpret it from a different perspective.

Dance is her language for a good story.

The imaginative and inspiring choreographies of Refracted Shadow, Dining Table and Web Traffic have proven JIANG Fan to be a competent youth choreographer and dancer. In her works, you can find both dance and drama just as you can find both dance lovers as well as audience of drama come to her show. This time, in Now Loading…, she is going to become Niaoge, a virtual character, and invite the audience to travel through the virtual world along with her.
Known as the little elf among the joint artists of SIDCT, JIANG Fan is ready to surprise you with her story.

Fantasy Land of Games? It is possible if you have the best team!

Screenwriter: ZHAO Yu’an, an independent screenwriter, director and mentor of drama, is a graduate of the Central Academy of Drama, majoring in directing.
ZHUANG Jiayun is the winner of Andrew W. Mellon Fund. She majored in screenwriting at the Central Academy of Drama and obtained doctoral degree in the field of theater and performance studies at UCLA.

Lighting design: TAN Hua obtained her first master degree from the Central Academy of Drama, majoring in stage lighting design and then received her second master degree of stage art from Royal Central School of Speech & Drama in the UK.

This team is going to take you through a game fantasy!

About the Creative Team

JIANG Fan, an independent artist in Shanghai and founder of The Three Bowls Co-op, is the joint artist of SIDCT. She graduated from Shanghai Drama Institute, majoring in choreography. In 2014, she founded Qiankongfan Theater. Her drama theater Refracted Shadow won the Best Drama of the Year granted by One Drama Awards in 2015. In May 2017, she founded The Three Bowl Co-op with ZHUANG Jiayun and her work Web Traffic was the first work choreographed by youth artist commissioned by SIDCT. She has cooperated with various art groups and institutions such as Living Dance Studio Beijing, the Niao Collective, Shanghai Dramatic Arts Center, Archa Theater, Zagreb Dance Center and Eurokaz Zagreb, introducing to the public a number of plays and musicals. Her recent works include Along at War (一个人的战争) (2008、2010), Rhapsody of Doomsday (末日狂想曲) (2012), Refracted Shadow 1.0/2.0/3.0 (折影 1.0/2.0/3.0) (2014-2016) and Dining with Me (与我吃饭) (2016).

ZHUANG Jiayun is the winner of Andrew W. Mellon Fund. She majored in screenwriting at the Central Academy of Drama and obtained doctoral degree in the field of theater and performance studies at UCLA.

She has carried out experiments on theatre in Europe, America and China, exploring the narrative mode and technical possibilities of contemporary theater. She worked as a Dramaturge for Playmakers Repertory Company, an American professional theater company, and as a planner and screenwriter at Harvard FAS CAMLab. She and Shanghai choreographer JIANG Fan set up "three kinds of bowl cooperatives" to test the possibility of cross-border dance and drama.

ZHAO Yu’an, an independent screenwriter, director and mentor of drama, was a student of ZHOU Xiaoqian, a national first-class director, and graduated from the Central Academy of Drama, majoring in directing.

She took part in works such as "House Guest", "Stranger", "Sound of the Sea", "Truth", "Lies", "You Are My Loneliness", "Song of Everlasting Regret", "White Paper of Ai Qing", "The Twilight of Spring Time", and Shanghai opera "Because of Love".

Her major works include Shanghai opera “Chunhuaqiushi” (The Progression of Seasons) which was granted the Shanghai Cultural Development Fund in 2019, dance drama “Now Loading…” and textbook drama “The String of Life.”

His personal stage design works include dramas such as “Open Couple”, “Pillow Man”, “Red Rose and White Rose”, “Bird man”, “Oriana”, “The Last War Elephant, “One Sentence Worth Ten Thousand”, “Flood”, “Scenes From A Marriage”, “Turmoil”, “Anna in the Tropics”, “Poison”, “The Play That Goes Wrong”, “ Night, Mother”, “Everlasting Regret”, “The Censor”, “The Ferry Man”, and “Hummingbirds Fly Backwards”; modern dance pieces such as "Web Traffic", "The Neighbor", "Fractured Shadow"; Kunqu opera such as "A Dream of Red Mansions", "Bolong Night"; Beijing opera such as “Ripples in the Stagnant Water.”

TAN Hua obtained her first master degree from the Central Academy of Drama, majoring in stage lighting design and then received her second master degree of stage art from Royal Central School of Speech & Drama in the UK.
Her works include “Red Rose and White Rose”, “Hurricane”, “Breath”, “Silence”,

MING is an experimental musician, music producer, dramatist, video maker and guitarist of the band Mirrors. He has been engaged in video drama music for many years. The style of his works is sometimes violent and sometimes quiet, taking the listener through different dimensions of energy and power. In his work, fantasy alternates with dream, and reality disintegrates.