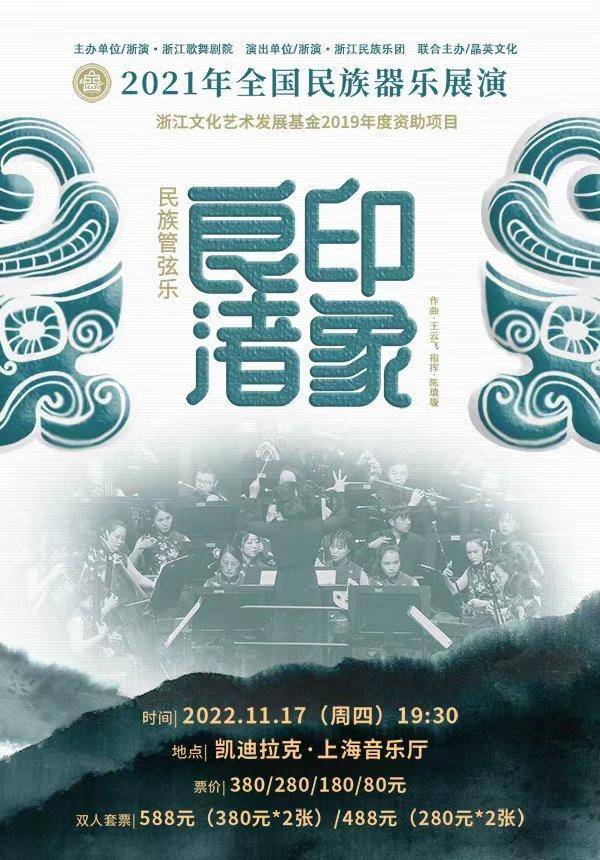 Notes, rhythms, and melodies are fragments of music.

And music can also be a fragment of history.

'Impressions of Liangzhu', a large-scale exhibition of ethnic instrumental music, uses music to record fragments of the Liangzhu years.

This autumn, let "Impression of Liangzhu" play its music. 'Impressions of Liangzhu', a large-scale folk orchestral piece, is directed by young conductor Chen Jinyuan Xuan. Seven passages record the splendor of Liangzhu, where the suona can blow the spirits of the earth, the pipa can play the faith of the jade congregation, and the erhu can play the artisanal spirit of the ancestors. The Zhejiang National Orchestra is part of the Zhejiang Performing Arts Group and was established in 1957. It has been dedicated to the excavation, collation, and research of folk music, especially Zhejiang local music, and has created a large number of folk instrumental works with a strong Jiangnan style and Zhejiang local characteristics. Liangzhu is located in the Taihu Lake basin at the lower reaches of the Yangtze River, a place with a temperate climate, a dense network of water, rich resources, and suitable for human habitation, known as the "Water Country". The work uses the theme of "water" to convey the traditional Chinese culture, depicting it as a place where all things are covered with water and a brilliant civilization is nurtured, and to appreciate the changes in things and the flow of history in the flow of music.

During the Liangzhu period, the ancestors used the statue of the gods with animal faces as a common god of faith, signifying that the Liangzhu society had a high degree of unity in spiritual beliefs. The work is a musical depiction of the ancestors' reverence for heaven and earth, creating a sense of unity between heaven and man in an ancient and mysterious atmosphere.

Liangzhu was one of the first places where rice farming originated in China, and the rice civilization was already quite advanced, leading to a high level of productivity development. The work unfolds with the threads of labor, harvest and celebration, celebrating the hard work and wisdom of the Liangzhu ancestors and depicting their happy life.

The ancient city of Liangzhu, as a center of culture, power and belief, was well planned, elaborately constructed, structurally complete and massively engineered, and is an outstanding example of early urban civilization in the history of human civilization. The work is a magnificent, sweeping piece, highlighting the grandeur of the architecture and the strength of the state, while emphasizing the humanistic and emotional aspects.

During the Liangzhu period, the ancestors used a system of inscribed symbols that are regarded as primitive writing. There are three main types of symbols, namely abstract symbols for referring to events, pictographic symbols, and pictorial symbols for expressing ideas. This work traces the origins of primitive writing and celebrates the wisdom of the ancestors and the splendor of ancient civilizations.

During the Liangzhu period, the ancestors made pottery, textiles, bones, and stones, and the production of handicrafts became specialized and systematic. The work is a tribute to the craftsmanship of the ancestors and the excellence of their workmanship, and thus carries forward the spirit of the great artisans.

The most representative remains of the Liangzhu civilization are jade vessels. Jade biscuits and jade scepters were the material carriers of power, rituals, and beliefs during the Liangzhu period, used to mark identity and distinguish rank. This led to the rise of jade culture, which spread far and wide across China. The work captures the form of jade and transmits its spirit, seeking the essence of ancient Chinese civilization and passing on the true meaning of Chinese culture.

Finale: 'Shine in the East' for ethnic orchestra

Remarks: According to the requirements of epidemic prevention and control, every two seats in the Shanghai Concert Hall is seperated by two empty seats.